A Girl With Streptococcus dysgalactiae Brain Abscess and Meningitis

A 2-year-old girl was admitted to the hospital from our emergency department with a 1-week history of intermittently grabbing at her head and intermittently screaming. Her parents had interpreted this behavior as a possible sign of a headache. As a result, she had been evaluated by her pediatrician and had been advised to start ibuprofen for the presumed headache and to return for further assessment if her symptoms did not improve.

The girl had no history of head trauma, and she remained afebrile and did not display any other signs or symptoms of an infection. The day prior to her presentation at the hospital, however, she had developed overt disturbances of vision and an ataxic gait.

Two months prior to her presentation to the hospital, she had had a partial complex seizure lasting 30 minutes. The seizure had occurred after a febrile episode of acute unilateral atraumatic otorrhea, which had been treated with an intramuscular injection of ceftriaxone, 50 mg/kg, and topical antibiotic ciprofloxin and dexamethasone ophthalmic solution twice a day for 7 days. Because this had been her first provoked febrile seizure, laboratory testing and imaging of her brain had not been performed at that time. Her neurologic examination results had returned to baseline prior to discharge.

When the girl was admitted to our hospital, her vital signs included a temporal artery temperature of 38°C, a heart rate of 110 beats/min, a respiratory rate of 44 breaths/min, an oxygen saturation of 100% on room air, and elevated blood pressure for her age of 121/70 mm Hg. Her weight was 13.15 kg, which was in the 65th percentile, and her height was 85 cm, which was in the 20th percentile.

The child was sleepy, but she was easily arousable. She was nonverbal with the physician, nurse, and her parents. During the physical examination, she became irritable but was consolable when soothed by her parents.

The girl had a head tilt to her left side, but there were no signs of head trauma or head enlargement. She was noted to have a dysconjugate gaze and right-sided exotropia. Her pupils were 3 mm in diameter and were equally round and reactive. In addition, her extraocular muscles were intact. Examination of the optic disk was not performed.

The patient could sit and stand without support, and her upper and lower extremities had normal muscle tone and strength. When she was asked to walk, her gait was noted to be asymmetric with a right-sided limp. Her deep tendon reflexes were unremarkable at the elbows, wrists, and knees. A Babinski sign was not elicited, and the examiner was unable to assess tandem walking or signs of dysmetria.

The girl had a significant past medical history that included a prior hospitalization at 13 months of age for cervical lymphadenitis with profound neutropenia. At the time, her absolute neutrophil count was 80 cells/µL, her monocyte count was 2000 cells/µL, her hemoglobin was 10 g/dL, and her mean corpuscular volume (MCV) was 75 µm3. The child’s parents declined the hematologist’s strong recommendation for bone marrow aspiration. The anemia was not further evaluated or treated after the girl had been discharged.

The child had remained well, without skin and soft tissue infections, until her second hospitalization at 2 years of age for a complex febrile seizure in the setting of spontaneous acute otorrhea. She had no past history of recurrent acute otitis media or acute paranasal sinusitis.

She had been discharged from that hospitalization, and she had had no subsequent medical problems or further laboratory testing performed until the present admission.

The admission laboratory tests had many notable results. Her total white blood cell (WBC) count was 9000 cells/µL. She was profoundly neutropenic, with zero neutrophils, which was confirmed by a manual differential WBC count. Her total lymphocyte count was 20 cells/µL, and her monocyte count was 79 cells/µL. The child’s hemoglobin was 7.2 g/dL, and her MCV was 64 µm3, indicating microcytosis. The red cell distribution width was 19%, and her reticulocyte count was 0.9% of red blood cells. Inflammatory markers were extremely elevated, with the erythrocyte sedimentation rate at 142 mm/h and the C-reactive protein level at 330 mg/L.

The results of a computed tomography scan of the head without contrast enhancement (Figure 1) showed an intracerebral mass located at the right temporoparietal junction, with nonobstructive communicating hydrocephalic enlargement of her right ventricle. She was quickly admitted to the pediatric intensive care unit for placement of an external ventricular drain. 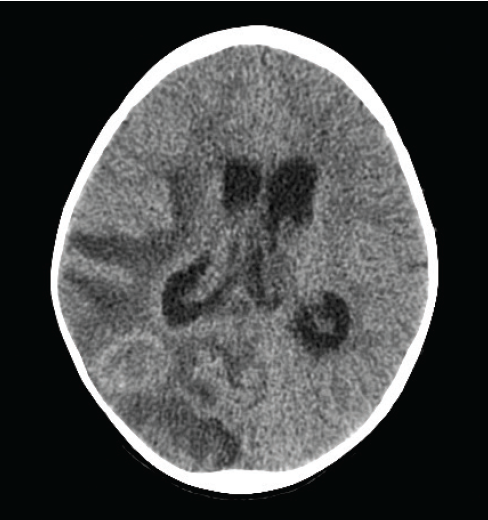 Figure 1. Computed tomography scan of the head showed an intracerebral mass located at the right temporoparietal junction, with nonobstructive communicating hydrocephalic enlargement of her right ventricle. 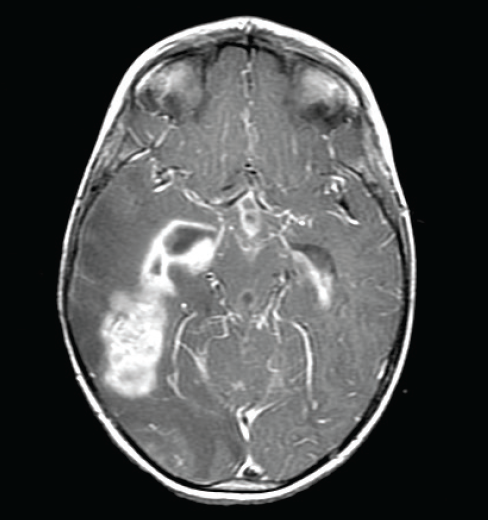 A head and spine magnetic resonance imaging (MRI) scan with gadolinium contrast was obtained (Figure 2), and it revealed a diffuse inflammatory process of the meninges, reported as diffuse meningitis. An intradermally placed tuberculin skin test was negative after 48 hours.

On closer inspection of a stained specimen from the CSF culture after 12 hours of incubation, small cocci and rods were visualized within macrophages. Cultures from urine and throat specimens contained a light growth of Streptococcus dysgalactiae. The final CSF bacterial culture report stated that there was a light growth of S dysgalactiae susceptible to penicillin, vancomycin, linezolid, and several cephalosporin antibiotics.

Prior to the positive CSF culture results, a 50-mg/kg dose of cefepime and a 10-mg/kg dose metronidazole were initiated and administered intravenously 3 times a day for 2 days. After results of susceptibility tests were known, cefepime was discontinued, ceftriaxone (50 mg/kg, twice a day for a 12-week duration) was started alone with the metronidazole to eradicate any undetected anaerobic organisms that had not grown in the initial culture.

The patient received a diagnosis of S dysgalactiae brain abscess, meningitis, and cerebritis. The origin was possibly from a recent middle ear infection.

Continued on next page >>

A sample of the child’s agranulocytic blood was sent for genetic testing for the HAX1 and ELANE genes, which are responsible for most cases of congenital agranulocytosis. Results were negative for defects in those 2 genes.

A repeat MRI scan of the brain at 6 weeks of treatment showed no change in the size or appearance of the brain abscess. Several external ventricular drain clamp trials failed, and as a result, an internal ventriculoperitoneal shunt procedure was performed. Intravenous ceftriaxone and metronidazole were continued for the planned 12-week duration. Immediately prior to the end of antibiotic treatment, a repeat MRI of the brain with contrast showed marked interval improvement in abscesses and cerebritis involving the lateral ventricles and the right temporo-occipital region.

The patient did experience some transient motor and gait deficits after discharge. In addition, after discharge she was noted to have a wide-based gait that improved to baseline with intensive physical therapy. She has no behavioral, cognitive, or language residual problems. The agranulocytosis responded to granulocyte colony-stimulating factor supplementation, and she will likely stay on this treatment indefinitely.

A brain abscess is a focal, intracerebral infection that begins as a localized area of cerebritis and develops into a frank abscess surrounded by a well-vascularized capsule. The most common source of brain abscess in children arises from a suppurative infection in the middle ear, mastoid space, or paranasal sinuses. We believe that this girl is the youngest person to be reported with an S dysgalactiae brain abscess.

Group A and group C/G streptococci can cause acute poststreptococcal glomerulonephritis.5 In a large study published in 2009, 23% of children with invasive S dysgalactiae (group C/G) infections were found to be immunocompromised.6 The young girl in our report was immunosuppressed, because she had chronic agranulocytosis. It is still considered uncertain whether S dysgalactiae causes nonepidemic pharyngitis in children and adolescents, although there is growing genetic, clinical, and circumstantial evidence that it does.8 Although this particular study involved only college students and not younger children and adolescents, it nonetheless provides evidence regarding the role of S dysgalactiae in nonepidemic pharyngitis.

As part of a large 16-month study of 6694 throat cultures, 6 of 12 paired sera specimens (acute and convalescent) from 279 immunocompetent children who had been treated in a primary care pediatric office because of symptomatic pharyngitis and had received a diagnosis of group C/G streptococci produced a 4-fold increase in antistreptolysin O titers.2 The mean age range of symptomatic children and adolescents with group C/G streptococci isolated from their throat cultures was 12 to 14 years. In contrast, the mean age range of children and adolescents with throat cultures positive for group A streptococci was 6 to 8 years.2

Some researchers recommend that symptomatic children and adolescents who have bacitracin-resistant β-hemolytic group C streptococci in their throat culture should be treated with appropriate antibiotics.9,10

Examination of a sample of bone marrow shows “maturation arrest” at the promyelocyte or myelocyte stage and a normal cytogenetic analysis. Abnormalities in the HAX1 and ELANE genes on chromosome 19 are diagnostic for congenital agranulocytosis and congenital and cyclic neutropenia.11,12 Granulocyte colony-stimulating factor was administered to stimulate neutrophil production in the patient’s bone marrow.13

We concluded that our patient has an unexplained genetic cause for congenital agranulocytosis.

A 2-year old girl who was immunocompromised (by congenital agranulocytosis) with an acute draining ear had a nonfebrile complex partial seizure. Two months later, she developed an ataxic gait, visual defects, exotropia, and headaches. S dysgalactiae was recovered from her CSF culture and from her throat and urine specimens. She had zero neutrophils in her peripheral blood, and she also had anemia and highly abnormal acute-phase reactants. She responded well to a prolonged course of ceftriaxone in combination with metronidazole. The child may be the youngest reported in the medical literature with an S dysgalactiae brain abscess.

Farah Khan, MD, is a pediatrics resident physician in the Department of Pediatrics at Inova Children’s Hospital in Falls Church, Virginia.

Richard H. Schwartz, MD, is a pediatrician in the Department of Pediatrics at Inova Children’s Hospital in Falls Church, Virginia.

Rebecca Levorson, MD, is a pediatric infectious disease specialist in the Department of Pediatrics at Inova Children’s Hospital in Falls Church, Virginia.