A 45-year-old man presented with fever and multiple suprapubic, abdominal, and genital skin lesions with a purulent, malodorous discharge from the right groin. He reported that he had initially developed multiple, small, exophytic warty lesions, and that over a period of 5 years, these small lesions had progressively grown into multiple large, fungating, exophytic, cauliflower-like masses on his lower abdomen (Figure 1). Due to his lack of health insurance, the patient had not previously sought medical attention for his condition. 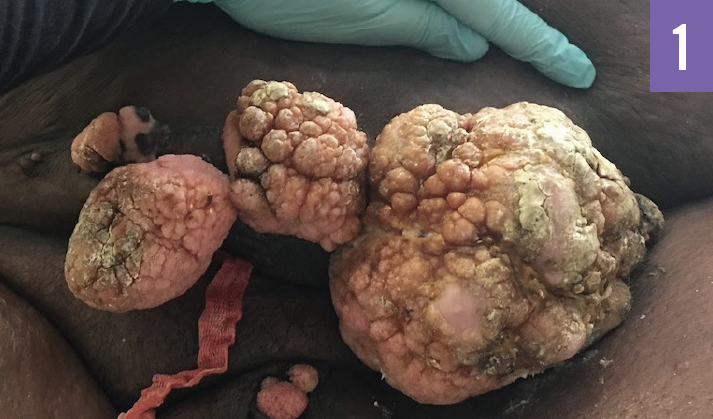 Physical examination. The patient was morbidly obese and ill-appearing. His temperature was 36.7°C, blood pressure was 118/72 mm Hg, heart rate was 98 beats/min, and respiratory rate was 26 breaths/min. In addition to the conspicuous lower abdominal masses, he had smaller lesions on his penis. A fluctuating area with purulent and malodorous discharge was present in the right groin. He had bilateral pitting edema to both thighs. The rest of the physical examination was unrevealing.

He denied weight loss and a history of any sexually transmitted diseases. Test results were negative for HIV and syphilis infection. Biopsies of the fungating lesions were performed, the pathology results of which revealed the diagnosis of giant condyloma acuminatum (Figures 2-4). Computed tomography scans of the abdomen showed that the large lesions were fed by increased vascularity. 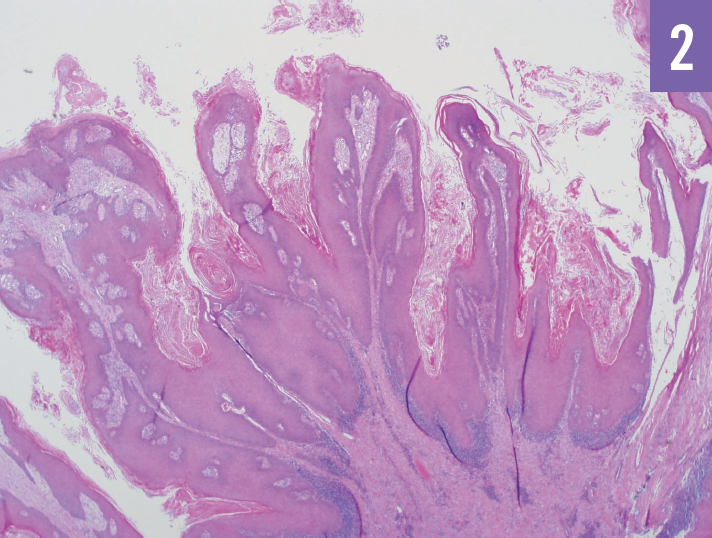 On low magnification, epidermal papillomatosis is visible with overlying hyperkeratosis and neutrophilic crust.

Higher magnification shows koilocytic alteration and vacuolated keratinocytes with pyknotic, raisin-like nuclei, with hyperkeratosis, which is predominantly parakeratotic in configuration. Dysplasia is not observed.

The patient subsequently underwent drainage of the groin abscess and received intravenous antibiotics. Given the severity of the lesions, the patient was scheduled to undergo panniculectomy once his infection had cleared and to be managed with local wound care in the interim.

Discussion. Giant condyloma acuminatum, also known as Buschke-Löwenstein tumor, was first described in 1925.1 It is a sexually transmitted disease preceded by ordinary condyloma acuminatum, and is estimated to occur in 0.1% of the general population.2 These unsightly lesions can have a detrimental effect on a patient’s daily activities and quality of life, making early management beneficial.

Giant condylomata acuminata are large, fungating masses that are usually localized to the anogenital region. These rare, locally destructive tumors have a tendency toward ulceration and deep infiltration into local tissue, possibly enhanced through fistula conduits.3 Human papillomavirus (HPV) infection has been identified as a contributory factor in the development of giant condylomata acuminata.4

The diagnosis is made from cytologic and histopathologic findings, and the extent of invasion can be determined with the use of radiographic imaging. On histologic examination, giant condylomata acuminata demonstrate both endophytic and exophytic growth with undulating papillomatosis of densely keratinized, well-differentiated squamous epithelium.5 These tumors have a high rate of malignant transformation to squamous cell carcinoma, which can occur in 5 years on average.3

Complications include fistulas and abscesses, which also may precipitate sepsis, as seen in our patient’s case.5 High rates of recurrence (66%) and mortality (20%) are also of concern.3 Therefore, prompt medical attention, biopsy, and eradication are imperative.

Due to the magnitude and invasive characteristics of giant condylomata acuminata, treatment is often challenging. Treatment modalities include wide surgical excision, chemoradiation, topical and intralesional chemotherapy, carbon-dioxide laser therapy, and photodynamic therapy.2 Giant condylomata acuminata are resistant to chemotherapy and radiotherapy and usually necessitate surgical excision.6 If it is feasible, surgical management is preferred. Because of our patient’s clinical picture, this treatment was not an immediate option but was to be revisited after his infection had been cleared.

Because of the high recurrence and complication rates, prevention of condylomata acuminata is essential through patient education and HPV vaccination in adolescents and young adults.