ABSTRACT: The most recent statistics predict that 1 in 5 people will be over the age of 65 by 2050. For the primary care practitioner, this means that older patients are a vital part of any medical practice. This article discusses the risk factors for skin disorders and offers treatment pearls when treating the geriatric population. A generational approach is designed to help optimize skin health over the course of a lifetime.

The older patient is a vital part any medical practice. And, increased longevity will increase the number of elderly. As people live longer, their dermatologic needs will increase as the skin, hair, and nails must last longer. Dermatologists will increasingly focus on how the skin can optimally perform for a longer period.

With several 40-year-old patients in my private practice, I took note to observe the changes in their skin over the next decade until they hit their 50s in 2004. Their sixth decade brought on more skin problems and these skin issues continue to present. Slowly, a pattern of skin aging emerged.2 Intervening where I could, I began to tease out the idea of looking at the aging process as an evolving process. My 65 and older geriatric patients did not turn 65 overnight. It happened 1 day, of 1 decade, at a time.

This prompted me to look at my 30-year-old patients with generational eyes—or anticipate the likely trajectory of the patient’s skin based on genetic predisposition, indicators on physical exam, and body environment. Armed with that knowledge, I could then design primary and secondary preventative medical strategies early enough to potentially change the outcome; this concept is known as tertiary prevention.3

The goal of generational dermatology is to optimize skin health over the course of a lifetime. When I noticed evolving dynamic rhytids and peeling photodamaged skin, I began an early intervention by injecting fillers and neurotoxins to reduce future precancers. For my elderly patients who had dry foot, mobility, and nail disorders, I would recommend pedicures and foot massages.

The key to this approach is full body skin examination for early intervention—to look for clues on future morbidity rather than waiting for the patient to present with a skin disorder. Most importantly, you must be aware of the risk factors for disorders in the geriatric population. This article discusses the risk factors and offers treatment pearls to help manage skin disorders among this patient population. 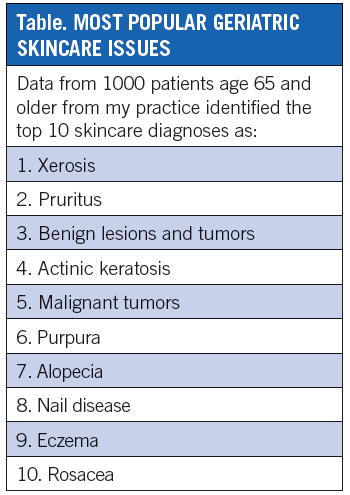 An internal practice survey polled 1000 patients (age 65 and older) to list the top 10 skincare diagnoses (Table), including xerosis, pruritus, rosacea, and eczema. In addition, rhytids, drug eruption, scabies, intertrigo, and folliculitis were well represented. These disorders occurred in men and women with equal frequency.4 A European retrospective study examining 2100 geriatric patients found similar results: the male to female ratio was 1.4 to 1 and the most common disorders were pruritus (18.9%), benign tumors (13.5%), actinic keratosis (9.1%), and malignant tumors (13.2%).5

This knowledge is key in understanding the evolution of hyperkeratosis, ulcers, and wound characteristics in aged skin.6,7 Transepidermal water loss (TEWL) is an indicator for measuring healthy skin barrier function. TEWL in individuals 65 years and older has been found to be consistently lower when compared to a group of individuals age 18 to 64.8 Clinically, we need skincare strategies to prevent xerosis, pruritus, hyperkeratosis, and resultant ulcers in this older generation.

Conditions that may result from barrier function are numerous and include xerosis, which may preclude pruritus. Hyperkeratosis often seen in the elderly foot is the precursor to ulcers, as the faulty keratin cannot maintain integrity with trauma. Aesteatotic eczema and perineal irritant dermatitis occur secondary to decreased lipid content and a delayed barrier repair after skin irritation. Delayed barrier repair is caused by decreased enzymatic activity involved in lipid synthesis and processing, a changed cytokine profile, a less acid skin pH, and altered epidermal stem cell function.9,10

Xerosis Pearls For The Geriatric Patient

Here are treatment tips to review with geriatric patients presenting with xerosis:

• Water use. Limit skin contact to water to once daily for 10 minutes only.

• Cool it. Avoid hot water and instead use tepid or warm water

• Moisturize. This should be done 2 to 3 times per day—once after washing, plus 2 additional times daily Moisturizers rehydrate the corneocyets and promote structure of the diminishing lipid bilayer. Moisturizers hydrate the corneocytes. Urea, lactic acid, and glycerin attract and hold water. Occlusives can be layered over the moisturizer, petrolatum, mineral oil, coconut oil, and shea butter to prevent evaporation of the water decreasing TEWL in the severe xerotic.

• Corticosteroids. Severe aestheatotis, which has an inflammatory component (nummular dermatitis), can be treated with limited courses of mid-potency corticosteroids or calcineurin inhibitors that treat the inflammation, while moisturizers and occlusives work on barrier repair.9,10

Dermal changes of aging skin are characterized by photodamage in response to oxidative stress, metalloproteinase, and
cytokine cascades.11 Heliodermatitis results in collagen and elastin degradation with change in shape and function of structural elements. Folliculosebaceous and eccrine structures decrease in size and production.

As individuals age, their skin undergoes dermal changes. Here are recommendations for older patients to help protect their aging skin:

• Use cosmecuticals with evidence-based effects on skin.

Skin cancer is more frequently seen in older generations; evidence suggests that elder individuals have an increased susceptibility to nonmelanoma skin cancer (NMSC). Keratinocyte response to ultraviolet (UV) B irradiation is dependent on the activation of the insulin-like growth factor-1 receptor (IGF-1R) on them.14 IGF-1R is primarily activated by IGF-1 produced and secreted by papillary dermal fibroblasts. The expression of IGF-1 in the dermis diminishes with age due to an increase in senescent unproductive fibroblasts.15 Therefore, the skin of geriatric individuals is often deficient in IGF-1 leading to insufficient activation of the IGF-1R in geriatric epidermal keratinocytes.16

When exposed to UVB radiation, this IGF-1 deficiency results in an inappropriate response in epidermal keratinocytes that could permit the establishment of UVB-induced mutations in geriatric skin which then progress to NMSC.16 Clinical relevance is the observation that fractionated laser skin resurfacing was demonstrated to decrease the occurrence of senescent fibroblasts in geriatric dermis, increase the dermal expression of IGF-1 and correct the inappropriate UVB response.17

Skin cancer in the elderly may present a diagnostic challenge by atypical presentation and morphology. Basal cell carcinoma (BCC) may masquerade as telangiectasia, squamous cell carcinoma psoriasis, or a chronic nonhealing wound,18 and melanoma as a solar lentigo.

Here are strategies for the management and treatment of elderly patients with skin cancer:

• Histopathology can direct the course of treatment. A biopsied superficial BCC may not require excision but pharmacotherapy.

• Vitamin D recommendations for the aging population: Maintain serum 25-(OH)-vitamin D3 levels in the 75 nmol/L to 100 nmol/L range.
An oral cholecalciferol intake of approximately 2000 IU/day is recommended as a supplement throughout the year for those who cannot enjoy the sun in summer or only during winter for others.22

Hair aging comprises decrease in hair pigmentation (graying) and decrease in hair production (alopecia). The scalp and hair are subject to intrinsic/chronologic aging, and extrinsic aging due to environmental factors, which include UV radiation, smoking, and nutrition.23 Evidence is emerging that androgenetic alopecia may be considered a form of organ-specific premature aging and associated with endocrine and cardiovascular morbidity.24,25

Hair Pearls For The Geriatric Patient

• Determine the type of hair abnormality.

• Review environmental factors, such as comorbidities, diet, and nutrition. Oral supplements, such as biotin and marine fish extract, have controlled studies showing benefit.26 Selenium and keratin may have a role in hair health but lack controlled studies.26,27 Malnutrition is a known risk factor for alopecia.

• Tailor treatment to adjust as many causative factors as possible. For example, topical minoxidil 5% with oral finasteride 1 mg and biotin.27

BNS has been shown to improve after supplementation with a 2.5 mg dose of biotin daily or a 10 mg dose of silicon daily.30,31

Nail fungal infections account for 50% of all nail disorders. It is reported at 40% in elderly subjects. However, it is probably higher because it is a disorder often undetected by healthcare professionals. Causes of onychomycosis include a reduced rate of nail plate growth with advancing age, change in keratin structure, decreased immune system, concomitant disease (eg, diabetes mellitus and peripheral arterial disease), nail trauma due to faulty biomechanics, immobility, and decreased foot care and nail clipping.28,29

Drug eruptions and pharmacotherapy polypharmacy of older patients may contribute to drug eruptions and coexisting skin conditions of xerosis and pruritus. Pharmacotherapy is an emerging critical subject for all geriatricians.32 Age-related physiologic changes and disease-related changes in organ function affect drug handling (pharmacokinetics) and response (pharmacodynamics). Multiple comorbidities, multiple medications (prescription, over-the-counter, homeopathic, supplements, and herbs), and multiple providers (prescribers, pharmacies, naturopaths, and internists) can contribute to this issue. In addition, this is compounded by the aging cognitive impairment, memory challenges and functional difficulties.32,33

The geriatric patient is your next cosmetic patient. During the full body skin examination, review the pathophysiology and therapeutic aspects of both aesthetic and medical disorders with the patient, including mid-face volume loss, dynamic and nondynamic rhytids, on and off face skin rejuvenation, and vein treatments. Also review best skincare practices and the role of cosmeceuticals as this is all a part of the aging patient.

The 65 and older patient is a rapidly growing demographic with unique skin, hair, and nail issues. Skin barrier is a significant issue creating the backdrop for conditions, such as xerosis, pruritus, and purpura. Emerging science suggests that photodamage and possibly even NMSC may be ameliorated with laser- and light-based technology. Hair disorders and alopecia may be associated with underlying comorbidities of an endocrine and cardiovascular nature. Skin cancer treatment modalities are becoming less invasive with new topical pharmacotherapeutics to treat early malignancies.

While nail disorders are often unrecognized, they may be prevented by encouraging foot health and hygiene. Polypharmacy plays an increasing role in drug eruptions and skin conditions. Practitioners need an understanding of drug metabolism and skin interactions.

In addition, cosmetic dermatology is increasingly becoming part of the culture for men and women as patients are living longer and want their skin to reflect their attitude not their age. Using a generational preventive approach toward the evolving aging patient can help target morbidity and guide patients toward best practices in putting their best skin forward during their golden years.

This article was originally published in the October issue of The Dermatologist.

1. US Administration on Aging. The older population. www.aoa.gov/AoARoot/Aging_Statistics/Profile/2013/3.aspx. Accessed September 22, 2014.

10. Kottner J, Lichterfeld A, Blume-Peytavi U, Kuhlmey A. Skin health promotion in the elderly. Z Gerontol Geriatr. 2014 Mar 1 [epub ahead of print].

26. Glynis A. A double-blind, placebo-controlled study evaluating the efficacy of an oral supplement in women with self-perceived thinning hair. J Clin Aesthet Dermatol. 2012;5(11):28-34.