A full-term boy was born via vaginal delivery. The results of anatomy ultrasonography scan at 19 weeks’ gestation had been normal. The mother had felt normal fetal movement during pregnancy. 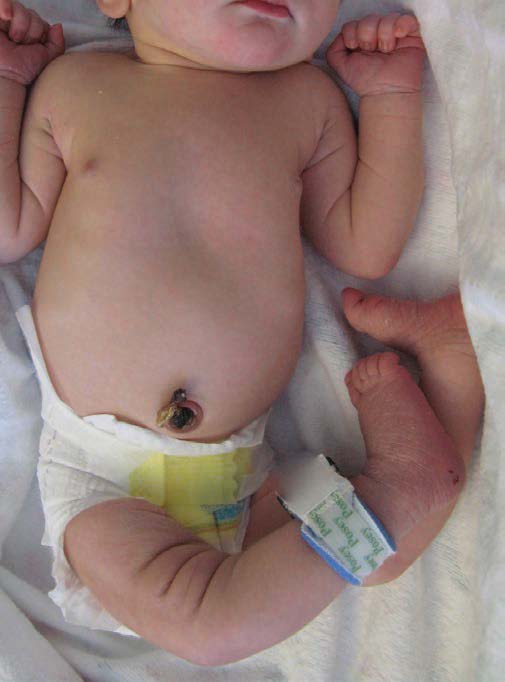 At birth, the infant was noted to have hyperextension of the knees to 65° bilaterally, with passive extension to 0°. Radiographs showed no bony abnormalities or dislocation of the knees. He received a diagnosis of congenital genu recurvatum.

The neonate was seen on the first day of life by a pediatric occupational therapist, who instructed the family on passive range of motion stretching.

The infant was discharged from the hospital and then was seen by a pediatric orthopedic specialist in the outpatient clinic at 1 week of age. Serial casting was performed for a total of 3 weeks. The infant now is 7 months old, and his lower extremities appear normal.

Genu recurvatum is Latin for backward bending of the knee. The condition can be congenital or acquired. Congenital genu recurvatum is apparent at birth and might be quite alarming to the family and health care providers. It can be isolated, associated with other musculoskeletal anomalies, or part of a syndrome. Other possible associated musculoskeletal anomalies are hip dysplasia, talipes equinovarus, and absent patella. Syndromes that include genu recurvatum are Larsen syndrome and arthrogryposis multiplex congenita.

Spontaneous resolution of genu recurvatum can occur, but cases of severe deformity in neglected children also have been described.4 Depending on the severity of the deformity, treatment may include watchful waiting, flexion exercises, splinting, casting, or surgery. The less severe the hyperextension and the more aligned the knee joint, the better the outcome with conservative treatment.

A critical role for the health care provider of a newborn with genu recurvatum is reassurance of the family followed by referral to an orthopedist.