A 5-week-old breastfed boy presented to the pediatric gastroenterology office for evaluation of possible gastroesophageal reflux disease (GERD). He was born full-term via Cesarean delivery with a birth weight of 3376 g. At 9 days of life, he started having painful burps, as well as nonbloody, nonbilious spit up after breastfeeding. With each attempt at feeding, he cried, arched his back, and stiffened his body. At 9 days of life, the boy weighed 3283 g, which was approximately 3% below his birth weight. Due to the ongoing symptoms associated with episodes of spitting up, his pediatrician started him on 4 mg/kg/day of ranitidine at 4 weeks of life.

On physical examination in the gastroenterology office, the boy was awake, alert, and in no acute distress. The results of his abdominal examination were unremarkable, and he did not have any abdominal distension, tenderness on palpation, palpable abdominal masses, or hepatosplenomegaly. The ranitidine was maximized for his weight. Given concern for a possible cow’s milk protein allergy contributing to his symptoms of spitting up, pain with feeds, and initial slow weight gain, the boy was transitioned from breast milk to an extensively hydrolyzed formula.

The boy was seen weekly by his pediatrician for weight checks. At 8 weeks of life, he returned to the gastroenterology office with persisting symptoms, and he was transitioned from ranitidine to lansoprazole. Follow up at 11 weeks of life revealed continued spitting up and worsening failure to thrive with a weight of 4550 g (1.2% of weight for age). He was transitioned to an elemental formula with increased caloric density per ounce of formula. Given his ongoing spit up and poor weight gain, laboratory testing and imaging were performed.

Laboratory testing revealed a transaminitis with alanine aminotransferase of 83 U/L and aspartate aminotransferase of 66 U/L, for which infectious and metabolic evaluations were performed and were negative. Abdominal ultrasonography results were unremarkable. An upper gastrointestinal (UGI) series revealed a horizontally-oriented stomach with inversion of the greater and lesser curvatures, as well as inferiorly-oriented vertical course of the distal stomach suggestive of organoaxial gastric volvulus (Figure 1). 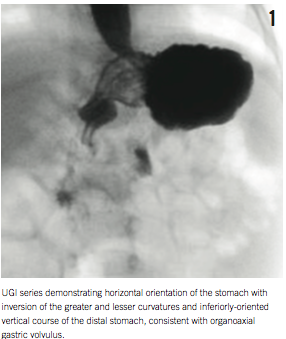 The boy was taken to the operating room, where he underwent laparoscopic gastric detorsion and gastropexy to the anterior abdominal wall (Figure 2). He had an unremarkable postoperative course and was discharged home on postoperative day 4. At follow up, he had improvement in his symptoms, and his oral intake returned to normal with improved weight gain. The transaminitis subsequently resolved. 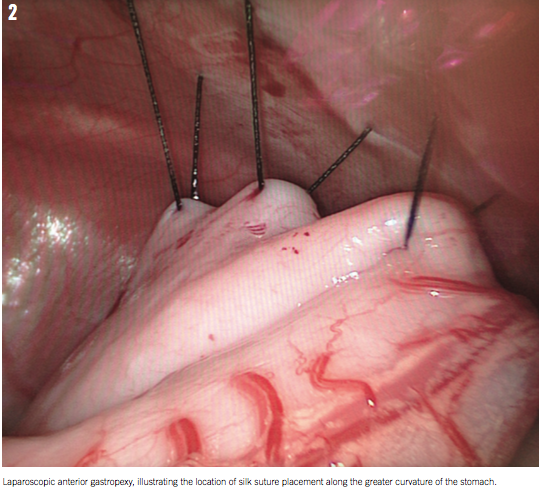 Gastric volvulus presents in both acute and chronic forms. Although gastric volvulus is a rare condition,1-4 the diagnosis should be considered in pediatric patients in the appropriate clinical setting. Presenting symptoms are nonspecific and resemble those of more common pediatric diagnoses, and delay in diagnosis has been associated with significant morbidity and mortality.1,5

Once diagnosed, initial steps in management of gastric volvulus include hemodynamic stabilization when necessary, and gastric decompression followed by surgery,7,8 either via laparotomy or laparoscopy. Surgical intervention is the preferred treatment for both acute and chronic gastric volvulus in North America. Surgical management consists of gastric detorsion, resection, and repair of areas of perforation, as well as gastric fixation. Fixation can be performed by anterior gastropexy, fundic gastropexy, or via gastrostomy tube placement.6

The risk of recurrent gastric volvulus is increased if coexisting defects go unrepaired.1 Thus, when there are associated diaphragmatic abnormalities, they should be repaired at the time of surgery. Consideration can also be given to attempting medical management in cases of chronic gastric volvulus. Medical management is more commonly used outside of the United States. Nonoperative management includes infant positioning right-side down or prone with the head elevated above the torso after feeding. This position may facilitate keeping the dependent portion of the stomach inferior to the lesser curvature, which may decrease the risk of volvulus.1

The morbidity and mortality associated with both acute and chronic gastric volvulus necessitates the need for heightened suspicion and prompt management of the diagnosis in the appropriate clinical setting. In our patient, who did not respond to initial acid suppression with ranitidine and elemental formula, imaging could have been considered earlier before introducing lansoprazole and thickening formula. This may have led to earlier diagnosis and allowed for surgical intervention.

This case illustrates the importance of considering alternative diagnoses such as pyloric stenosis and hiatal hernia, as well as less common diagnoses such as gastric volvulus, when a patient fails to respond to conventional management for more commonly encountered conditions.

Lesley Small-Harary, MD, is a clinical fellow in the Division of Pediatric Gastroenterology and Nutrition at New York-Presbyterian Hospital/Weill Cornell Medicine in New York, New York.

Elaine Barfield, MD, is an assistant professor of pediatrics in the Division of Pediatric Gastroenterology and Nutrition at New York-Presbyterian Hospital/Weill Cornell Medicine in New York, New York.