A 15-year-old, previously healthy girl presented to our emergency department (ED) with concern for decreased oral intake, cramping abdominal pain, and at least 10 episodes of nonbilious, nonbloody emesis. She denied any past medical problems and had never undergone surgery. She denied ever being pregnant and was having her menses at time of presentation.

Physical examination findings in the ED were notable for tacky mucous membranes and a soft, nondistended abdomen with tenderness and guarding to palpation in the left lower and upper quadrants. Cervical motion tenderness was noted on pelvic examination. There was no adnexal tenderness.

The results of laboratory testing, including a complete blood count, comprehensive metabolic panel, lipase test, amylase test, and vaginal wet mount test, were unremarkable. A urine pregnancy test was negative. Gonococcal and chlamydia test results later were found to be negative. An abdominal radiograph was read as normal. 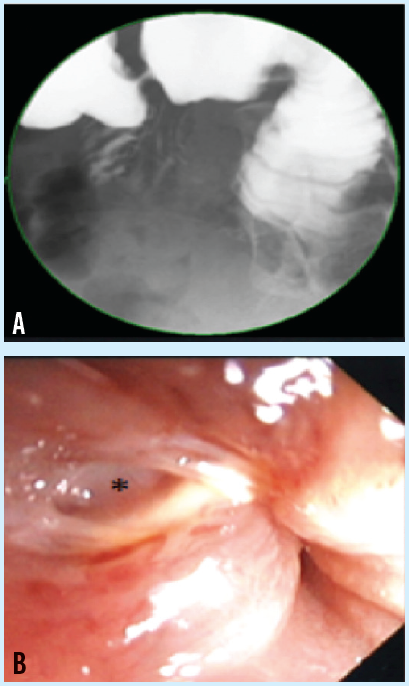 Due to concern for pelvic inflammatory disease and her inability to tolerate fluids or oral medications, she was admitted to the general pediatric service for intravenous fluids and antibiotics. Her abdominal pain persisted throughout the first 2 days of hospitalization despite the administration of pain medications and the broadening of antibiotic coverage. On day 3, the patient developed bilious emesis. An upper gastrointestinal (GI) series demonstrated a high-grade small bowel obstruction (SBO) in the area of the duodenojejunal junction (A).

Esophagogastroduodenoscopy demonstrated a high-grade obstruction, with a deep ulcer (B) and a sessile polyp (C) present just proximal to the obstruction. Mild mucosal inflammation also was present. Biopsy results showed heterotopic fundic mucosa with mild chronic inflammation. The patient was started on an intravenous proton-pump inhibitor (PPI) and experienced rapid clinical improvement with cessation of pain, nausea, and vomiting within 24 hours of starting PPI therapy.

She was discharged home on a PPI, and she remained on PPI therapy for 6 months after discharge. She subsequently has been weaned from the PPI and has been asymptomatic for more than 2 years.

Gastric heterotopia (GHT), a condition in which the gastric mucosa is discovered outside of the stomach, is an uncommon but significant cause of SBO and must be considered in the differential diagnosis of SBO in patients of all ages.1 The most common site for symptomatic GHT is in the ileum as a component of a Meckel diverticulum. However, GHT can be found throughout the entire GI tract.1,2

While most cases of GHT are asymptomatic, complications can result from acid secretion by the parietal cells, which are located within heterotopic gastric tissue. Reported complications can include airway obstruction, GI bleeding, stricture, obstruction or intussusception, and rectal polyps.1

Treatment of GHT varies widely due to its wide range of associated complications. In our patient, high-dose PPI therapy presumably decreased acid production by the parietal cells present in the heterotopic tissue. This reduction in acid led to decreased inflammation and ultimately relieved the obstruction. Although H2 receptor blockers did not seem to be efficacious in our patient in the short term, there have been a number of reports of successful therapy with either H2 receptor blocker or PPI therapy.3 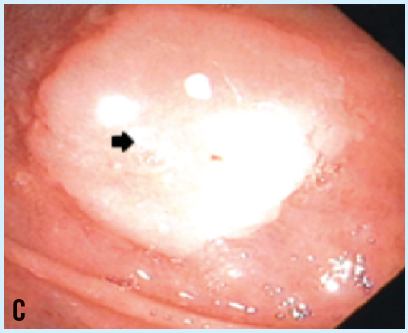 For refractory or recurring symptoms, definitive therapy requires the removal of GHT either by endoscopy or by surgical excision.