Ganglioneuroblastoma: An Atypical Presentation of a Rare Tumor

An otherwise healthy 39-month-old male was referred with a 20-month history of 4 to 5 loose stools per day and recent growth deceleration. Birth history was unremarkable. Initially breastfed through 18 months of life, his parents reported persistent loose stools. The stools were never watery, but did occur while fasting. There was no history of frequent antibiotic use or foreign travel. Loose stools continued despite trials of dairy, fructose, and gluten elimination. 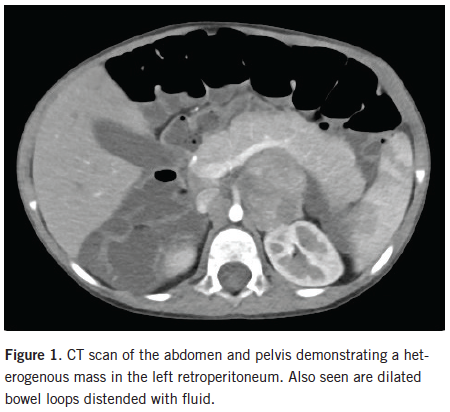 At 37 months of age, hypokalemia was detected (2.1 mmol/L; normal 3.8 to 5.1 mmol/L), with normal to mild hyponatremia and nonanion gap metabolic acidosis. A small-bowel follow-through procedure revealed no abnormalities, and an abdominal ultrasound showed normal kidneys and dilated colon with significant liquid stool. Urine studies did not suggest a renal etiology. Potassium citrate supplementation was initiated at 4 mEq/kg twice a day.

On examination at 39 months, the patient appeared healthy and interactive. Maximal blood pressure was 91/55 mm Hg. Abdominal exam revealed no hepatosplenomegaly, mass, or tenderness. Thyroid, zinc, and gastrin levels were normal. Stool analysis was notable for absence of leukocytes, normal sodium and chloride levels, but had an osmolar gap of –32 mOsm/kg (normal 275 to 295 mOsm/kg), suggesting a secretory diarrhea. 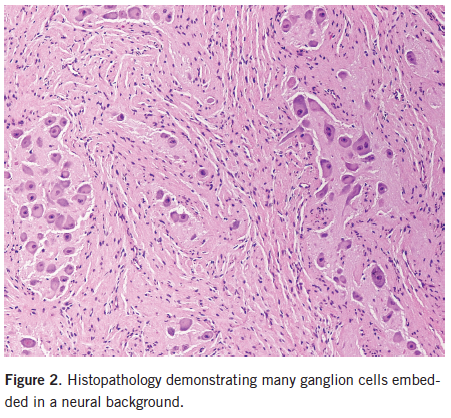 A computed tomography (CT) chest/abdomen scan revealed a heterogenous tumor in the left retroperitoneum without metastases (mIBG scan; Figure 1). Histologic examination (Figure 2) was consistent with differentiated ganglioneuroblastoma, after a complete resection of the 5.7 × 4.3 × 4.0-cm mass was performed (Figures 3A and 3B). Bone marrow biopsy was normal, without features of malignancy. Within 1 week VIP, VMA, and HVA levels normalized. The oral potassium citrate was discontinued, and 1 week later serum potassium and bicarbonate normalized, with the eventual development of well-formed stools.

Described in 1952, VIP-producing tumors cause a syndrome of watery diarrhea, hypokalemia, and achlorhydria (WDHA).1 The most common sites of involvement are the adrenal medulla, retroperitoneum, and posterior mediastinum, but tumors may also be found in the neck, pelvis, and lungs.2  A CT scan is the imaging modality of choice in diagnosis and detection of recurrence. 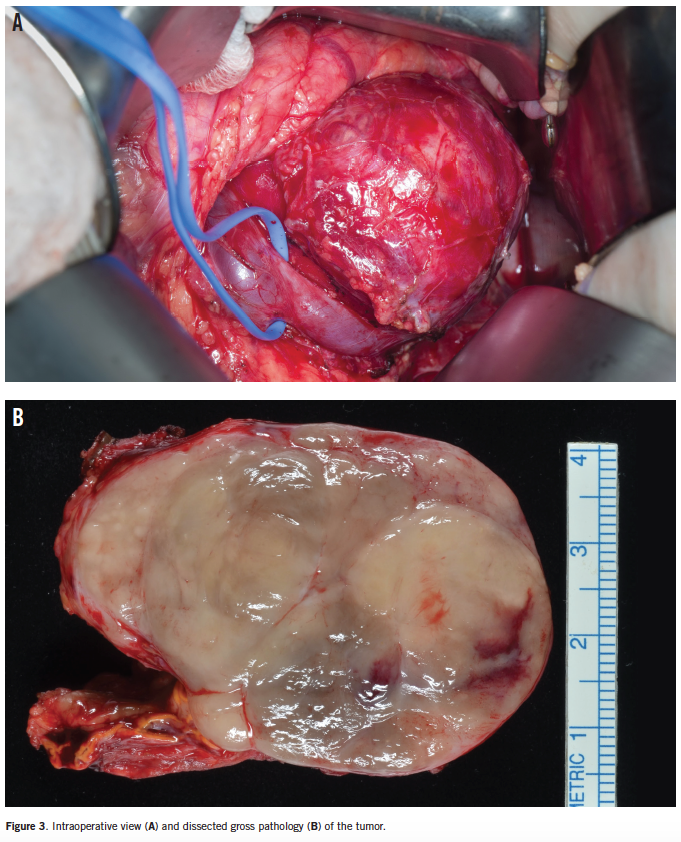 Tumors of the sympathetic nervous system can secrete different patterns of catecholamines and methylated metabolites. Preoperative management in a controlled setting is crucial, especially in very young patients. Alpha blockade is recommended for patients with increased catecholamines; calcium channel blockers and metyrosine may treat and prevent perioperative hypertension.3

Although ganglioneuroblastomas generally present in young children and can produce VIP, this patient did not present with typical profuse watery diarrhea and dehydration.4 This patient was also unique in that despite having elevated catecholamines and metanephrines, pallor, sweating, and hypertension were absent. This is a rare diagnosis, but it should be included in the differential diagnosis of chronic secretory diarrhea.

This case study was presented as a poster (No. 119) on October 8, 2015, at the North American Society for Pediatric Gastroenterology, Hepatology and Nutrition (NASPGHAN) Annual Meeting in Washington, DC.

Jeanne Tung, MD, is an assistant professor in the Division of Pediatric Gastroenterology at Mayo Clinic in Rochester, Minnesota.

Brandon Anderson, MD, is a pediatrician at Metropolitan Pediatrics Specialists in Minneapolis, Minnesota.

Carl H. Cramer II, MD, is assistant professor in the Division of Pediatric Nephrology at Mayo Clinic in Rochester, Minnesota.

Aida N. Lteif, MD, is an assistant professor in the Division of Pediatric Endocrinology at Mayo Clinic in Rochester, Minnesota.

Carola A. S. Arndt, MD, is a professor in the Division of Pediatric Hematology/Oncology at Mayo Clinic in Rochester, Minnesota.

Christopher Moir, MD, is a professor in the Division of Pediatric Surgery at Mayo Clinic in Rochester, Minnesota.

Jane Matsumoto, MD, is an assistant professor in the Department of Radiology at Mayo Clinic in Rochester, Minnesota.