Functional abdominal pain syndrome (FAPS) is a poorly understood gastrointestinal pain syndrome. Usually occurring in younger patients, FAPS is rare among older persons. The key criterion for distinguishing FAPS from other functional gastrointestinal disorders, such as irritable bowel syndrome (IBS), is the lack of a correlation between the pain and gastrointestinal function, including food intake or defecation. Pain usually presents for 6 months or longer and is commonly associated with functional decline, which can be mistaken for an occult malignancy. Failure to correctly identify and treat this disorder can lead to the stigmatization of these patients as malingerers. We report the case of an elderly man with a long history of severe abdominal pain, which was eventually recognized as FAPS.

A 90-year-old cognitively intact man with an 8-year history of abdominal pain was admitted to our acute care for the elderly unit with a working diagnosis of chronic intractable abdominal pain. His pain had increasingly worsened over the previous 6 months. His appetite remained unchanged, but the patient reported that the pain had become unremitting, causing him to stop driving and to become dependent on his daughters for his instrumental activities of daily living (IADLs). His only abdominal surgery had been a cholecystectomy for cholelithiasis, which was performed approximately 25 years earlier. His most recent previous hospitalization occurred approximately 5 months earlier. At that time, an abdominal computed tomography (CT) scan, magnetic resonance imaging scan, and esophagogastroduodenoscopy were undertaken and revealed no abnormalities. The patient was started on hydrocodone/acetaminophen, a viscous lidocaine mixture, and an H2 blocker, and he was discharged to home, where he continued this medication regimen.

The patient’s two daughters, who were actively managing his narcotic intake, reported that in previous years, their father had been treated with hydromorphone (1 mg every 6 hours and as needed) and hydrocodone/acetaminophen, which provided sufficient pain relief until recently. Also of note, the patient was a well-respected healthcare professional from the academic community, with no history of substance abuse, malingering, or other psychological problems throughout his distinguished career, except for mild anxiety upon adjusting to retirement several years prior to his current presentation.

Before his current hospital admission, he had been evaluated at the university pain clinic and had undergone a thoracic splanchnic nerve block and a diathermy treatment plan, both of which were ineffective. During his current admission, his medication regimen included a fentanyl patch 25 µg per hour every 72 hours, methadone 10 mg every 12 hours, and codeine 60 mg every 4 hours as needed, which had been prescribed by the pain clinic and his primary care provider. The patient reported that his pain was continuously increasing and rated it as “11 out of 10” on a 10-point pain scale. He described the pain as agonizing, but not colicky or cramp-like. The pain was unrelated to movement, defecation, or eating. He had mild anxiety, but no evidence of depressive symptoms. His physical examination was unremarkable, with reports of very mild tenderness on deep abdominal palpation. Scores on the Geriatric Depression Scale and Saint Louis University Mental Status Examination were both in the normal range. Laboratory tests, including a urinalysis, did not reveal significant abnormalities. A gastroenterologist was consulted, who ordered abdominal ultrasonography, an abdominal CT scan, and a colonoscopy, all of which were found to be normal.

The patient was placed on a morphine drip, which was only mildly effective and gradually failed to relieve his pain. He was also started on duloxetine 30 mg per day on hospital day 3. Within 48 hours, his pain decreased to 2 out of 10. He was weaned off of the morphine drip and was discharged to home on hospital day 5, receiving the same pain regimen described previously (fentanyl patch, methadone, and codeine). At a 2-week follow-up visit, the patient reported that his pain was contained at 2 out of 10 and that he had resumed driving and managing his IADLs. 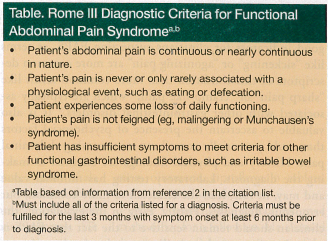 The case patient fits the Rome III Diagnostic Criteria for FAPS (Table).1,2 The pathophysiology of FAPS is unique in that the pain is thought to be caused by increased central perception of what is normal visceral pain output, rather than from enhanced peripheral visceral stimulation. FAPS is one of the less common functional gastrointestinal disorders, with a 1993 survey reporting a prevalence ranging from 0.5% to 2% among the US population.3 More recent articles indicate that the prevalence of FAPS is unknown, but that unspecified abdominal pain is reported in 22.9 per 1000-person years.4 FAPS presents similarly to other functional gastrointestinal disorders, but the syndrome is often misdiagnosed such that patients are considered to be malingerers or to have other psychological problems. FAPS and IBS are thought to be related disorders, with the fundamental difference being that IBS symptoms are always associated with food intake and gastrointestinal disturbance, such as constipation, whereas in FAPS there may be little or no association. Both disorders disproportionately affect women and typically present in patients younger than 65 years.5 FAPS may also be confused with narcotic bowel syndrome, which is characterized by a colicky pain that worsens as tachyphylaxis occurs. It has been reported that both healthcare use and psychosocial disturbances, such as anxiety, depression, or somatization, are increased when diagnosis is delayed.6 This may have occurred in our patient as his pain worsened and as his outpatient evaluative tests continually returned negative.

The etiology of FAPS is poorly understood. It has been suggested that this condition is a reaction to acute gastro-intestinal infection in younger patients.7 The clinical course is characterized by worsening psychological disturbances, such as depression or anxiety, with the pain gradually dom-inating the patient’s life.5 This also distinguishes FAPS from chronic mesenteric ischemia, which is more common in elderly populations.  Chronic mesenteric ischemia is typified by weight loss and intestinal angina, which was not seen in our patient.8

Clinical Evaluation
The initial patient evaluation should include a focused review of the individual’s history.9 Careful attention to descriptions of past abdominal pain episodes may help the clinician determine the possibility of FAPS. The specific use of emotional descriptions or terms could also be good indicators for clinicians suspecting FAPS, as terms like “sickening” or “agonizing pain” are more common descriptors of this condition than more common terms like “sharp pain” or “cramp-like pain,” which are typically associated with other gastrointestinal disorders.9 It is also valuable to ascertain the presence of psychosocial factors that could potentially contribute to worsening abdominal pain. History and physical findings are essential to making the diagnosis. Laboratory testing has minimal value and may, in fact, lead the clinician to more common, but erroneous, diagnoses. Finally, early in the evaluation, the clinician should remain sensitive to the fact that FAPS is not primarily a psychiatric illness, such as malingering or Munchausen syndrome, but rather a complex abdominal pain syndrome that requires involved and active efforts for successful diagnosis and treatment.

Treatment
Treatment of FAPS is not focused on a cure, but on actively controlling pain and managing symptoms. The approach requires a strong therapeutic relationship with a healthcare provider who will ultimately remain responsible for decisions regarding pain control throughout the patient’s course of care.9 As active healthcare-seeking behaviors, such as requesting diagnostic studies or exploratory surgery, are significantly increased among patients with FAPS, maintaining strong provider-patient rapport is critical to long-term success.

Although tricyclic antidepressants are widely considered the mainstay of treatment for functional pain disorders, judicious prescribing is warranted as their strong anticholinergic effects may preclude their use in some older patients.10 Such newer antidepressants with pain-controlling properties should be titrated appropriately. Selective serotonin reuptake inhibitors have had conflicting results in patients with IBS and, as such, are of uncertain benefit in treating patients with FAPS.11,12 Narcotics have been found to be of limited benefit, with most patients experiencing little or no relief. Therefore, narcotic use in individuals with FAPS should be avoided whenever possible, as this approach may lead to narcotic dependence and narcotic bowel syndrome.9 Cognitive behavioral therapy may benefit patients with moderate to severe symptoms.13

FAPS, a variant of IBS, is uncommonly seen in the older population, but can present a diagnostic challenge to clinicians. Since FAPS is defined as abdominal pain in the absence of an identifiable disorder, older patients with FAPS may be miscategorized as being malingerers or having other psychological problems, especially if they have been treated initially with narcotics, yielding little or no pain relief. However, FAPS should be considered in all elderly patients with unremitting, chronic pain that has continued for more than 6 months. Pharmacological options are limited and must be considered carefully in older patients who may have comorbidities, but optimal care can be provided to patients through strong provider-patient rapport and the involvement of multiple disciplines.

Department of Family and Community Medicine