Psoriasis of the Nipples and Areolae

An otherwise healthy 20-year-old Asian American woman presented to a university health clinic with painful, pruritic breasts. She stated that she had had the itchy rash on both of her breasts for about 1 month. She had tried to treat the condition with topical A+D Ointment and hydrocortisone cream, and she had used oral diphenhydramine for the pruritus, but all had been inadequate. She was not taking any other medications.

Physical examination. The rash on either breast had lateral involvement of the areola with a marginated, erythematous base (Figure 1). The right breast had excoriated and scaly skin around the nipple and areola (Figure 2). Both breasts were warm to the touch, with very dry skin. The patient described the right breast as having “stabbing pain” in the lateral lower quadrant. 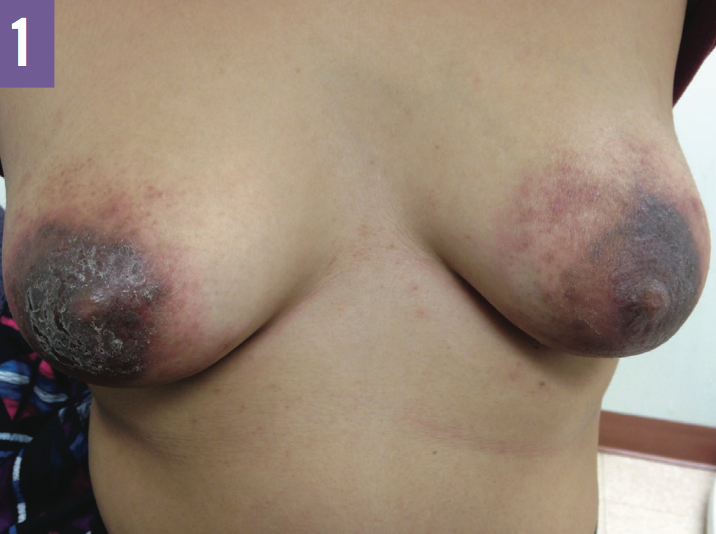 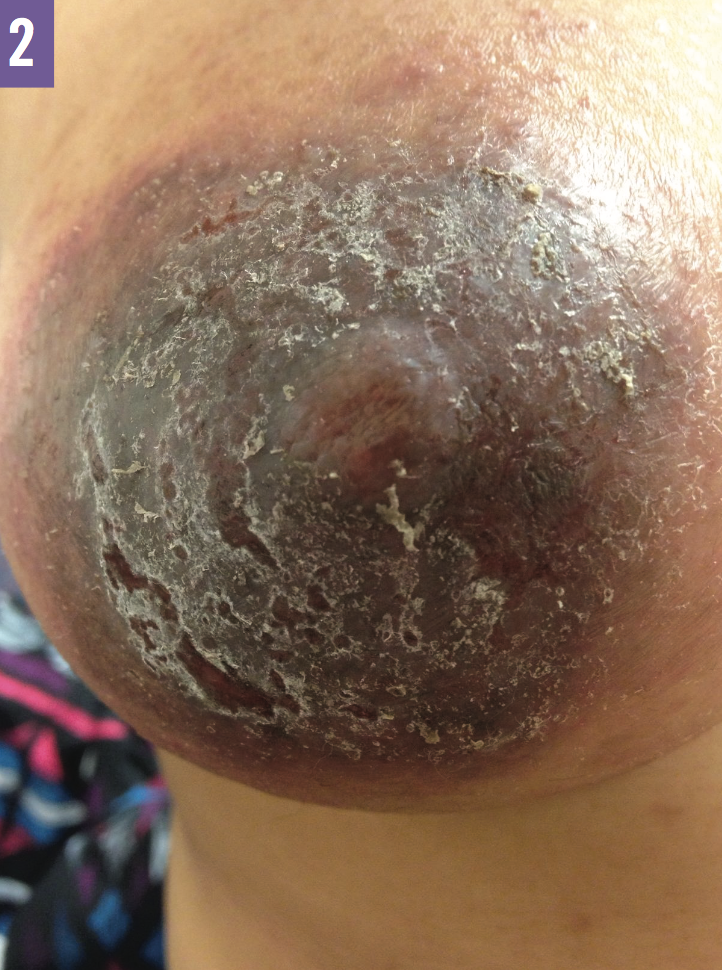 She was given an initial clinical diagnosis of localized cellulitis, eczema, and candidiasis.

Treatment. She was placed on cephalexin, two 500-mg tablets every 12 hours for 10 days, and advised to use over-the-counter hydrocortisone cream, 1%, as needed.

At a follow-up visit 3 days later, she had had no improvement, so twice-daily clotrimazole cream, 1%, was added to her regimen, and she was advised to not wear a bra and to use soap for sensitive skin.

She returned 3 days later, at which time her symptoms had not improved, and her pain had returned. Cephalexin was discontinued, and doxycycline, 100 mg twice a day for 10 days, was begun for coverage of methicillin-resistant Staphylococcus aureus.

Clinical course. She returned to the clinic 4 days later and reported that her symptoms had improved somewhat. Topical mupirocin was added to her regimen to penetrate the nipple, areola, and surrounding skin. At a scheduled follow-up visit 1 week later, the lesions had improved significantly, and she was advised to continue taking mupirocin, using gentle soap, and not wearing a bra.

Nevertheless, after another week had passed, she returned to the clinic with worsening symptoms. On physical examination, the bilateral rash on her breasts had reverted to a presentation similar to that seen at her initial visit, with both areolas demonstrating hyperpigmentation, inflammation, scaliness, and a surrounding erythematous patch. Pain had again developed in the right breast.

Outcome of the case. Treatment was begun with a 14-day regimen of triamcinolone acetonide cream, 0.1%, twice a day; upon completion of this therapy, the patient’s symptoms had completely resolved.

Discussion. Psoriasis is an autoimmune inflammatory condition that occurs in genetically susceptible persons and that initially presents with the onset of inflammatory cutaneous plaques.1 The prevalence of psoriasis in adults ranges from 0.91% in the United States to 8.5% in Norway.2 Peak onset in the United States occurs at 22.5 years of age.3 The US male-to-female ratio is approximately equal, with a greater incidence seen in the white population.4 Approximately 80% of patients have mild to moderate psoriasis cases, with the other 20% of patients having severe disease.4

Studies have supported the concept that interactions between dendritic cells, T cells, keratinocytes, neutrophils, and the cytokines released from immune cells likely contribute to the initiation and continuous nature of the hallmark skin inflammation of psoriasis.5

Psoriasis signs and symptoms can vary from person to person but may include one or more of the following: red patches of skin covered with silvery scales; small scaling spots (more common in children); dry, cracked skin that may bleed; pruritus, burning, or soreness; thickened, pitted, or ridged nails; and swollen and stiff joints.6 The typical plaque psoriasis pattern is bilateral, symmetric, and usually encompasses areas of the body that are not exposed to sunlight.7

Psoriasis can be triggered by physical trauma (ie, the Koebner phenomenon); rubbing and scratching will quicken the psoriatic process.3 Acute streptococcal infections can precipitate guttate psoriasis. Stress and alcohol ingestion can elicit a flare in patients with psoriasis. Sudden-onset psoriasis can also develop with HIV infection.3 Drugs such as systemic glucocorticoids, lithium, antimalarial medications, interferon, and β-blockers can cause flares or eruptions.3

Topical corticosteroids are the primary treatment option for plaque psoriasis in patients who have limited skin involvement. Skin atrophy, hypopigmentation, and striae can develop with the use of topical corticosteroids. Moreover, the clinical response tends to diminish over time.

Emollients such as petrolatum, as well as occlusive dressings and a topical vitamin D compound such as calcipotriene ointment, 0.005% twice daily, can be added to the treatment regimen to maintain hydration and minimize pruritus.4 Patients with moderate to severe plaque psoriasis (ie, psoriasis involving more than 5% to 10% of the skin) usually require an alternative approach such as phototherapy or any of a variety of other systemic medications.8