High-Grade Fever in a Man With Diabetes

Right-Sided Endocarditis in a Diabetic Patient

High-grade fever, chills, fatigue, malaise, and anorexia developed in a 35-year-old man following subclavian catheterization because of chronic renal failure of unknown cause.

The patient, who had long-standing diabetes mellitus, was admitted to the ICU with the diagnosis of possible sepsis. The next day, he was found to have a grade 2/6 systolic murmur compatible with tricuspid regurgitation.

This was confirmed when a 4-chamber echocardiogram (Figure 1) revealed a large single piece of vegetation (2 arrows) lying on the tricuspid valve, flapping in and out of the right ventricle. 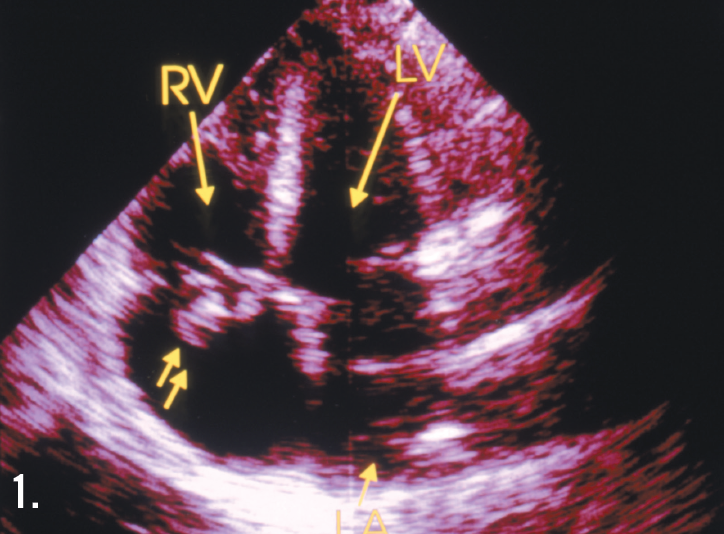 In a 2-dimensional echocardiogram of the right atrium and right ventricle (Figure 2), 3 arrows point to the vegetation. (RV, right ventricle; LV, left ventricle; RA, right atrium; LA, left atrium; TV, tricuspid valve.) The results of 3 sets of blood cultures were positive for Staphylococcus aureus, and the patient was given intravenous vancomycin for 6 weeks. This therapy failed, and he then underwent tricuspid valve replacement. 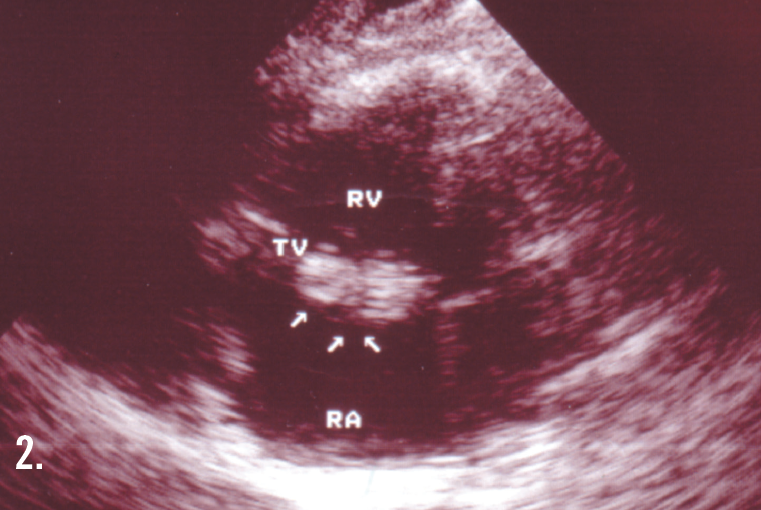 Although it has not been directly documented, metabolic, immunologic, and vascular abnormalities in diabetic patients may significantly contribute to their susceptibility to endocarditis.2 Moreover, these patients are increasingly prone to any type of infection—first, because of poor perfusion, and second, because acidosis inhibits leukocytic migration and phagocytosis.

Both conditions can serve as sources of bacteremia.3 In addition, an increased incidence of S aureus colonization on the skin and nares has been documented in diabetic patients.4 ■

A 67-year-old woman with insulin-dependent diabetes mellitus and uncontrolled hyperglycemia complained of fatigue and malaise. For 2 years, a draining ulcer had been present on the bottom of her left foot. The patient had septicemia; blood cultures were positive for Staphylococcus aureus. White blood cell count was 16,000/µL; erythrocyte sedimentation rate, 130 mm/h; and glucose level, 310 mg/dL. 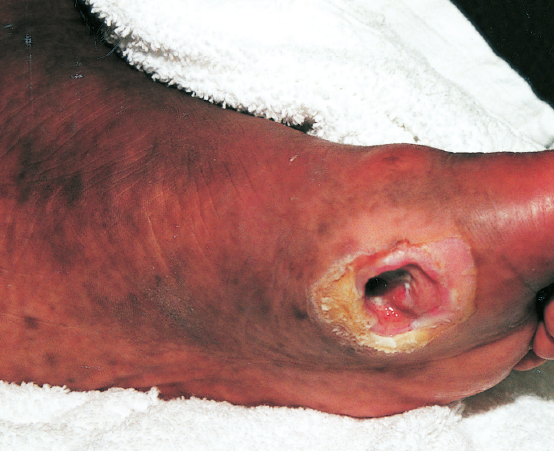 The patient was hospitalized; empiric therapy with cefazolin and gentamicin was started. The foot wound was irrigated and debrided. The ulcer extended deeply through the first web space, dorsally to the skin surface, and into the entire great toe. Extensive necrotic tissue was found. The patient’s circulatory status was very poor; she had severe peripheral vascular compromise. Drainage portals were established.

Cultures were obtained. Despite the extensive irrigation and debridement and the continued antibiotic therapy, the ulcer did not improve. A transmetatarsal amputation was performed. Initially, the patient’s condition improved; however, necrotic tissue at the surgical site was extensive. Cultures grew Proteus organisms, methicillin-resistant staphylococci, enterococcus group D streptococci, Klebsiella organisms, and Morganella organisms.

Ciprofloxacin and vancomycin replaced the initial antibiotic regimen; however, the patient’s elevated blood urea nitrogen and creatinine levels precluded long-term therapy. Because the transmetatarsal amputation site began to break down and the bacterial necrosis persisted despite continued antibiotic therapy, below-knee amputation was scheduled. During surgery, swollen tissue, very pale and extremely poor vascularity, and the absence of muscle contractility were noted; above-knee amputation was performed.

Dramatically compromised circulation and diminished bleeding and muscle contractility were evident even at this level and at this distance from the ulcer. Within 2 days of the operation, the patient was talkative and lively. The surgical site healed uneventfully. The patient was fitted for a prosthetic limb, and her glucose level was brought under control. She was very pleased with the outcome. ■

Cutaneous manifestations develop in approximately 30% of persons with diabetes. Premature atherosclerosis is a common complication of the disease that can cause peripheral infarction, ulceration, and necrosis. 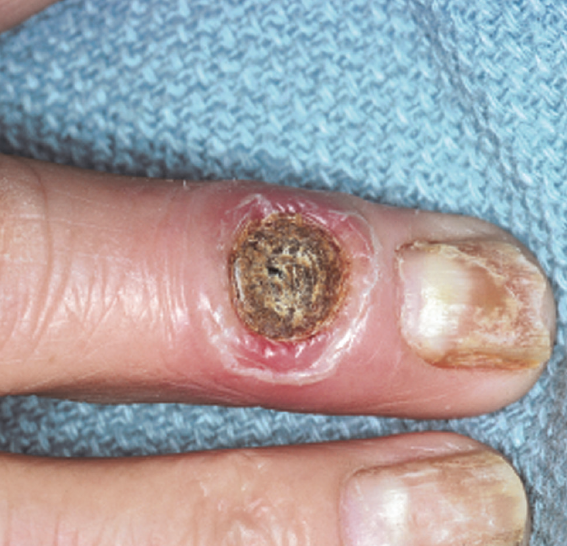 As seen here on the finger of a 64-year-old man who has a 25-year history of diabetes mellitus, ulceration secondary to insensible trauma can arise from diabetic neuropathy. Healing of such a lesion may be further complicated by vascular insufficiency related to the disease.

The pathogenic mechanism of vascular disease in diabetes is not clearly understood. Early diagnosis and tight glucose control afford the best opportunity to delay disease progression.

This patient was referred to a vascular surgeon for evaluation and treatment. ■

Spontaneous Gas Gangrene in a Man with Diabetes

Bilateral swelling and pain in the distal interphalangeal (DIP) joints for several months brought this 65-year-old woman to her physician. She complained also of stiffness in the region of the DIP joints when she arose in the morning and after short periods (less than 15 minutes) of inactivity. A history such as this, in conjunction with the appearance of the patient’s hand, is typical of Heberden node, which are a manifestation of osteoarthritis (OA).

A 59-year-old man with diabetes presented with a 4-day history of an increasingly painful, swollen left foot. He could not recall any trauma. His symptoms began as a nontender, small red “bump” on the dorsum of his foot. He reported that after 3 days shooting pains radiated up his left leg to his back. He denied any fevers, chills, nausea, vomiting, or other systemic symptoms. 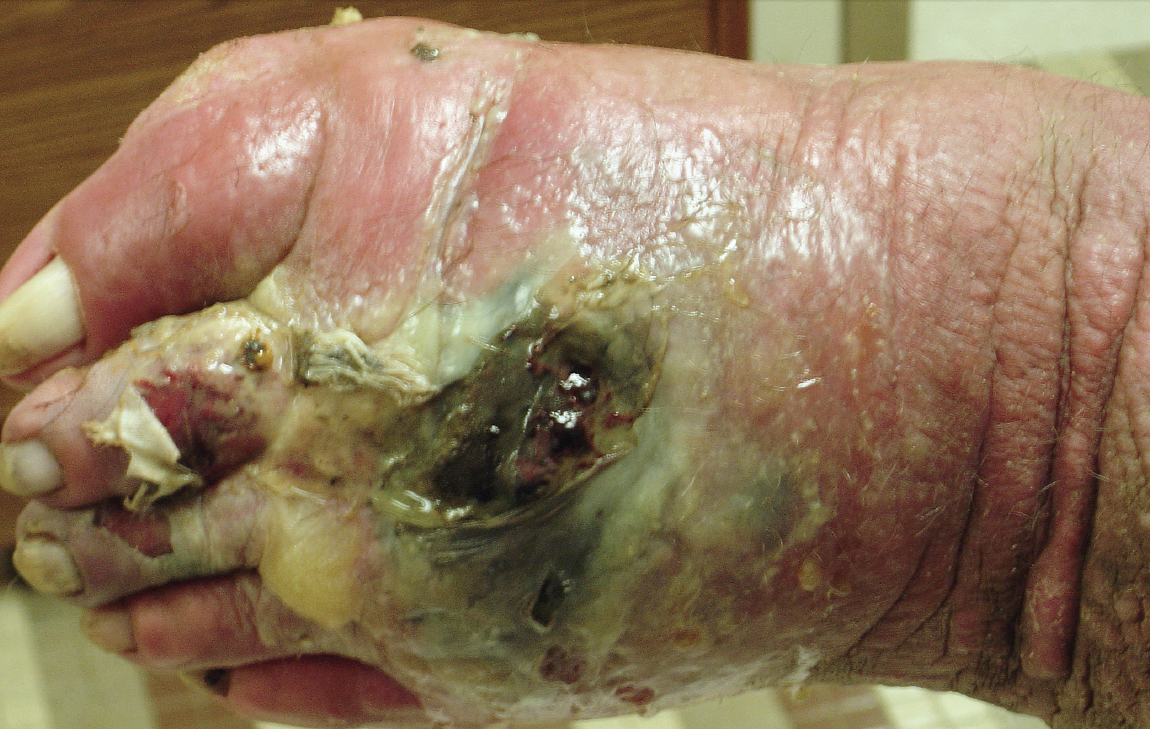 The patient was obese and used a wheelchair. His temperature was 37°C (98.6°F); heart rate, 102 beats per minute; blood pressure, 150/92 mm Hg; and oxygen saturation, 99% on room air. He rated the severity of the pain at 3 on a scale of 1 to 10. Bibasilar rales were appreciated on lung auscultation. Abdomen was soft and nontender with hypoactive bowel sounds.

The most striking finding was his extremely malodorous, erythematous and edematous left foot (Figure). There were black necrotic eschars involving the plantar and dorsal areas and blisters filled with clear fluid; palpable crepitus accompanied these deep ulcerations. A faint line of demarcation extended to the medial and lateral malleoli. Chronic stasis changes with prominent verrucous papillomatosis and edema were present in both lower extremities. Bone was appreciated during probing.

A vascular surgeon was immediately consulted, and the patient was admitted for treatment of gas gangrene. He underwent an emergency guillotine amputation of the left lower extremity, and he was given high doses of penicillin and gatifloxacin. On postoperative day 2, nurses noted bright red blood in his stool that continued for 2 more days. The patient denied any history of melena, hematochezia, or hematemesis, but with further prompting he stated that he had had some loose, watery bowel movements during the past week.

On colonoscopy, a 4-cm tumor in the sigmoid colon was found. Biopsy revealed an adenocarcinoma of the colon, and further workup demonstrated liver metastases.

Discussion. Spontaneous gas gangrene, or distant clostridial myonecrosis, is a rapidly progressive tissue infection with prominent morbidity and mortality.1 It is typically caused by clostridia; these gram-positive, anaerobic, spore-forming bacilli may produce regional disease by invading tissues through exogenous or endogenous pathways and/or cause systemic disease via secretion of various toxins.1,2 Traumatic gas gangrene is most commonly associated with motor vehicle accidents, contaminated muscle injuries, and surgical wounds. Clostridial contamination occurs in more than 80% of traumatic wounds, but the incidence of gas gangrene is only 1% to 2%.3 Gas gangrene is caused by Clostridium perfringens in 80% of cases.4

Symptoms. The classic feature of gas gangrene is severe pain disproportionate to the physical clinical signs. This symptom may initially be obscured if the patient has underlying neuropathy. Pain may precede the cutaneous findings by 24 to 48 hours.7 Large hemorrhagic bullae, skin necrosis, crepitus, and sensory or motor neurologic deficits are late signs; these are unusual findings in cellulitis and other soft tissue infections.8 Crepitus is a very sensitive indicator, but it is nonspecific and often presents late. Laboratory findings may include decreased hemoglobin level (due to hemolysis), elevated white blood cell count, and elevated muscle enzyme levels.

Differential diagnosis. Gas gangrene is associated with multiple systemic diseases, including neutropenia, diabetes mellitus, necrotizing enterocolitis, Crohn’s disease, diverticulitis, and bowel infarction.7 Distant myonecrosis caused by C septicum has been repeatedly reported in association with hematologic and visceral malignancies, many of which have metastasized by the time of infection. In one series, 84% of patients with spontaneous gas gangrene who had no known malignancy were subsequently found to have an occult colon carcinoma, most frequently of the cecum.9

The hypothesized mechanism of these associations proposes that small microtears or disruption of the bowel mucosal integrity by a malignant tumor, inflammatory disease, or aggressive chemotherapy permits passage of normal flora (C perfringens is part of normal colonic flora) into the bloodstream with subsequent seeding of distant locations. This leads to rapid destruction of vulnerable tissue if regional vascularity, oxygenation, or immunologic functioning is impaired. Nontraumatic myonecrosis carries a significantly worse prognosis than traumatic myonecrosis.9

Treatment. Therapy should begin immediately. Any delay in diagnosis and treatment may result in increased morbidity and mortality.10 Imaging studies may be beneficial but may delay immediate treatment.

Intravenous antibiotics and surgical debridement of necrosis are essential. Patients who receive antibiotics without surgical intervention have a poor prognosis.11 Surgical debridement of all necrotic tissue is paramount because thrombosis of the supplying blood vessels hinders antibiotic delivery.8 Debridement should extend until healthy tissue is visualized and bleeding is encountered at the margins. Initially, broad-spectrum antibiotics should be used until the results of sensitivity studies are available.12 Specific sensitivity is extremely important because resistant strains have been reported.13,14 Hyperbaric oxygen treatment has produced beneficial results in this setting.15  ■