Fleece Bezoar in a 6-Year-Old Girl

A 6-year-old girl presented to the emergency department with a 3-day history of decreased appetite and diffuse abdominal pain, which was described as constant, nonradiating, and worsened by eating. The girl was previously healthy, and her development was appropriate for her age. Her mother denied history of weight loss, vomiting, diarrhea, fever, or upper respiratory infection symptoms, and her past medical, surgical, family, and social history were unremarkable. In addition, her history was negative for symptoms of psychosis, mania, hallucinations, or thoughts of self-harm, and there was no history of physical or sexual abuse.

Results of the physical examination indicated normal vital signs and a midline abdominal mass that was firm and mildly tender on palpation. The mass was approximately 15 × 6 cm, and it was accompanied by hyperactive bowel sounds (Figure 1). There was no evidence of alopecia, but the patient had iron deficiency anemia that was not present at her previous well visit, when her hemoglobin and hematocrit were within reference range. 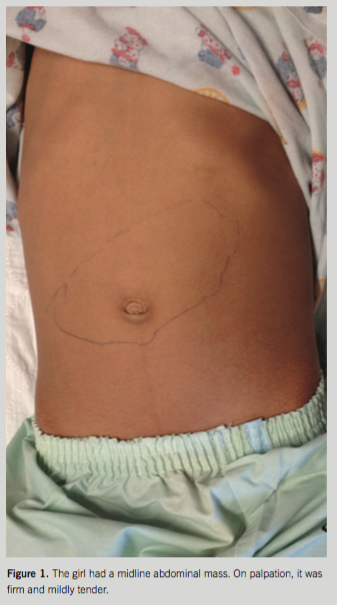 The girl was subsequently admitted to the hospital. During her stay, she said that she had been ingesting nonedible objects such as the fleece lining of her jackets and boots for the past year. This behavior coincided with the birth of her younger sister. An abdominal computed tomography (CT) scan with contrast showed that the girl had a distended stomach with mixed attenuating solid-appearing contents admixed with air (Figure 2). 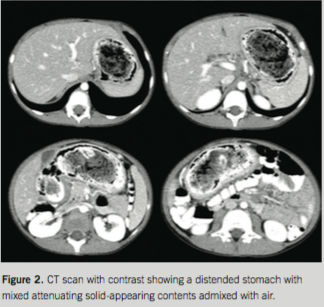 An evaluation by a child psychiatrist revealed that sibling rivalry resulting from the birth of her young sister may have been a precipitating stressor for the ingestion of fleece. With the addition of a new family member, the older child may feel displaced because of the parents’ preoccupation with the baby and relative lack of attention for the older child. This situation may lead the older child to exhibit frustration, demand attention, or show hostility toward the new baby. Our patient had been ingesting fleece for 1 year prior to presentation, and she was recommended for outpatient behavior therapy after medical stabilization.

A pediatric surgeon was consulted, and exploratory laparotomy with gastrostomy was performed (Figure 3). A 16 × 15 × 4 cm bezoar (Figure 4) consisting of a club-shaped dark tan aggregate of synthetic fibers mixed with black-to-white tufts of hair was removed. The tail was noted to extend into the duodenum. After surgery, the girl was nutritionally optimized using parenteral nutrition and was discharged on postoperative day 5 on oral iron with outpatient psychiatric follow up. 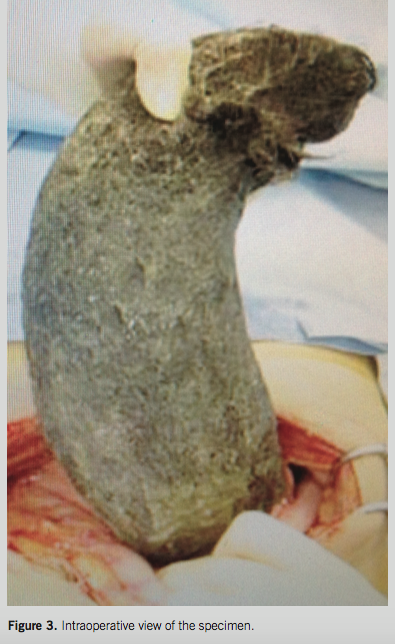 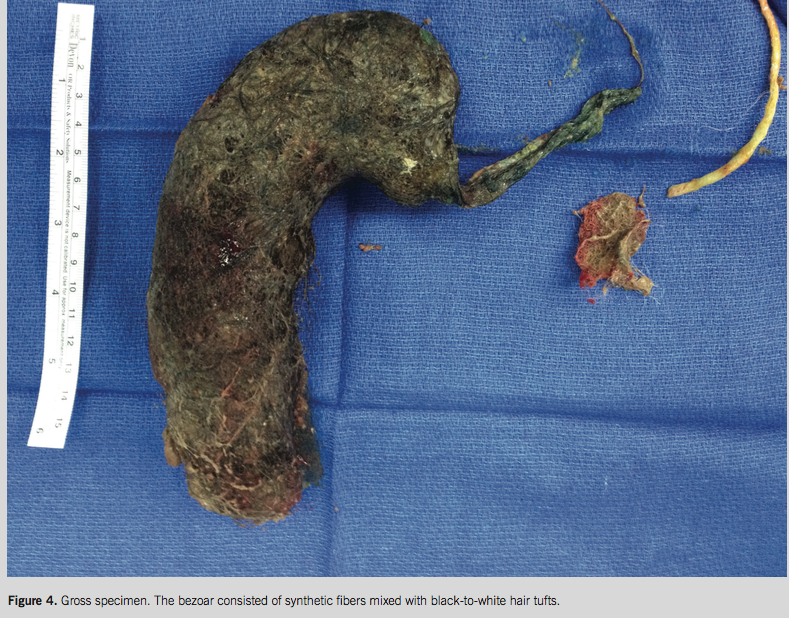 The etiology of bezoar formation is usually the ingestion of indigestible, inedible materials, especially by patients with psychiatric conditions or developmental challenges.1 Most cases of bezoars are phytobezoars, which are characterized by consumption of indigestible plant fibers.2 Patients with trichobezoars usually have trichotillomania and show baldness or a patchy hair pattern.

Lactobezoars and pharmacobezoars have also been reported in some patients. Cotton bezoars, another type of bezoar, are rare and result when the patient ingests strings that are unraveled from clothes.3 The ingested strings coil up and mix with mucus and food particles to form a gastric bezoar, and the long strings may extend into the duodenum, leading to Rapunzel syndrome.

Our patient’s bezoar was composed of fleece, which is a synthetic fiber. To the best of our knowledge, fleece bezoars are novel and have not been reported in a patient as young as ours.

Most cases of bezoar occur in females between the ages of 15 and 20 years,3 and some are accompanied by psychiatric disorders such as trichotrillomania, tricophagia, pica, depression, obsessive-compulsive disorder, anorexia nervosa, a history of having been abused as children, or other emotional and psychiatric disorders.1,4 However, there have also been reports of bezoar in young children. Kadian and colleagues reported a phytobezoar with cotton threads in a 4 year-old child,5 and Chen and colleagues reported 4 children (2 boys and 2 girls, aged 6 months to 10 years) with surgically proven bezoars.6 Psychologic problems are not always evident in patients with bezoars, so a detailed history is essential.

Even though clinical examination often reveals a large, mobile epigastric mass that may be indentable, the so-called Lamerton sign,7 endoscopy is usually diagnostic. The most common diagnostic tool described in the literature is a CT scan, with a typical image showing a well-defined intraluminal ovoid heterogeneous mass with interspersed gas.8,9

Recurrence of bezoars is possible and has been reported in up to 20% of patients with phytobezoars, adults included.10,11 To prevent recurrence, patients should be encouraged to increase water intake, modify their diet (eg, avoid persimmons, stringy vegetables, and high-fiber foods); chew their food carefully; and to seek psychiatric evaluation, if needed. Our patient required psychiatric evaluation and received outpatient psychotherapy without pharmacologic intervention.