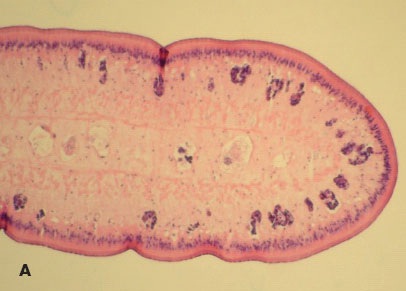 A 15-year-old boy presented with a “string” protruding about 5 cm from his anus. He had had abdominal cramping that morning, prompting a bowel movement. After the stool, he passed a meter-long object that broke into the toilet. He attempted to remove the remaining “string,” but pulling on it induced left lower quadrant abdominal pain. He denied purposefully ingesting nonfood objects, choking, or chewing anything unusual. He also denied inserting anything or having anything inserted into his anus. He was otherwise healthy and had no significant medical or family history.

Larval ingestion leading to adult tapeworm infection is the usual presentation of Diphyllobothrium (fish tapeworm) infestation, as it was in this case. Diphyllobothrium larvae most commonly infest the human gut through consumption of undercooked fish, although, theoretically, ingestion of other definitive hosts that eat fish could also result in infection. Diphyllobothrium infection is not directly contagious; thorough cooking or freezing of vector fish before ingestion prevents transmission.

Adult tapeworms can vary in length from 3 to 12 m and may survive for decades in their hosts. In addition to causing abdominal discomfort, Diphyllobothrium can interfere with intrinsic factor binding to vitamin B12 inside the intestinal lumen, leading to megaloblastic anemia.1 This patient was asymptomatic, so neither testing for anemia nor vitamin B12 supplementation was required.

Although fish tapeworm infestation is endemic to North America, it is unusual outside of Canada, the Great Lakes region, and Alaska.2 Increased travel3 and the popularity of less thorough cooking methods4 have been linked to cases of Diphyllobothrium infection acquired from those regions. The patient denied consuming raw fish but, on further inquiry, he divulged that he had taken a “survival” hike in Canada several months earlier. On the trip, he had eaten freshwater fish he had caught and cooked himself. 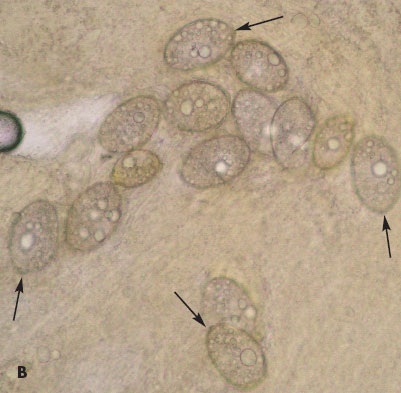