Fingers and Toes: Presentations of Polydactyly

An appropriate-for-gestational-age girl was born at term with extra digits on her left foot. The mother’s past medical history was unremarkable, and the pregnancy was notable for her occasional use of marijuana. Of note, there was no maternal history of gestational diabetes. The family history was negative for polydactyly.

On physical examination, the newborn was noted to have 7 toes on the left foot (Figure 1). The rest of the examination findings were unremarkable. The patient was referred to an orthopedic specialist for further evaluation. 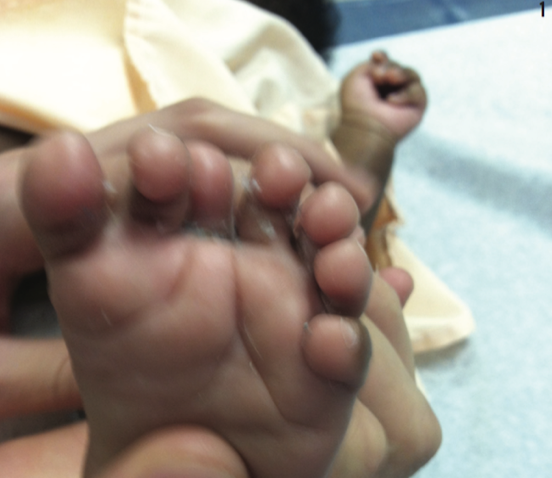 In cases with lower extremity involvement, duplication of the fifth toe is the most common abnormality. Bilateral deformities are seen in 50% of cases. Polydactyly of the toes typically occurs as an isolated deformity with autosomal dominant inheritance.1 However, other patterns of inheritance, sporadic occurrence, and association with syndromes also can occur. Associated syndromes include Bardet-Biedl syndrome, chondroectodermal dysplasia (Ellis-van Creveld syndrome), Greig cephalopolysyndactyly syndrome, McKusick-Kaufman syndrome, Pallister-Hall syndrome, trisomy 13, trisomy 21, and Weyers acrofacial dysostosis (Table).2 Lower extremity polydactyly can occur as a complication in children of diabetic mothers. Proximally placed preaxial polydactyly, particularly when coupled with segmentation anomalies of the spine and tibial hemimelia (aplasia or hypoplasia), is highly suggestive of diabetic embryopathy.3\ 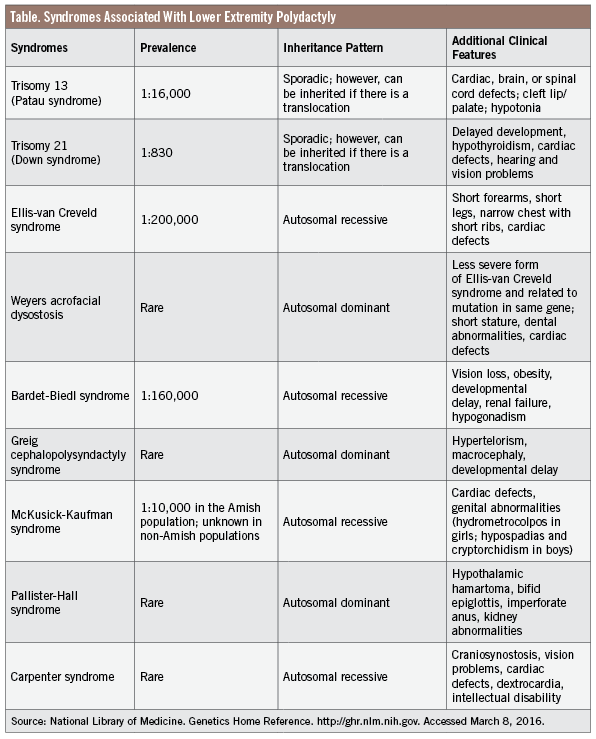 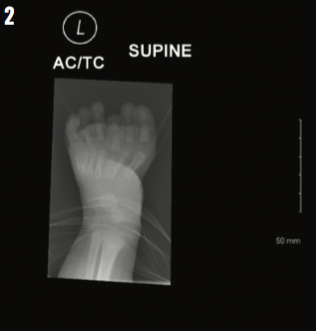 Because protruding toes can cause problems with the fit of footwear in the future, the decision to remove them usually is made before the child begins to walk. The ideal age at which to remove supernumerary toes is between 9 and 12 months. At this age, the foot is large enough to make excision simple, and the child is less aware of the problem. Simple resection of the extra toes is generally sufficient, especially in cases of postaxial deformity. The surgeon should be careful not to leave a scar on the lateral edge of the foot, where it could cause discomfort when wearing footwear. If both partner toes in a case of postaxial polydactyly are roughly similar in size, removal of the more medial toe results in a more stable and sturdier lateral foot margin.

Central duplications often cause permanent widening of the foot. In preaxial polydactyly, simple resection may not be sufficient, since the first metatarsal often is shortened. The deviation of the metatarsophalangeal joint may need to be corrected by an osteotomy, and if the toe is severely shortened, a lengthening osteotomy with an external fixator may be required.5

In this newborn with atypical polydactyly, an orthopedic surgeon commented on her “mirror foot” with an abnormal metatarsal region and foreshortened third metatarsal (Figure 2), increasing the complexity of her case. Surgical plans eventually may entail removal of the third and lateral rays and the abnormal third metatarsal when the girl reaches approximately 12 months of age. A repeat anteroposterior radiograph of her foot was scheduled for 9 months of age to evaluate for “new” bones that may have ossified since her first radiograph, which ultimately may affect surgical planning.

Postaxial polydactyly type B (PAP-B) features a nonfunctional, partially formed, ulnar (or fibular) digit with no bony attachments, such as the ones seen on the hands of this patient (Figure 3). 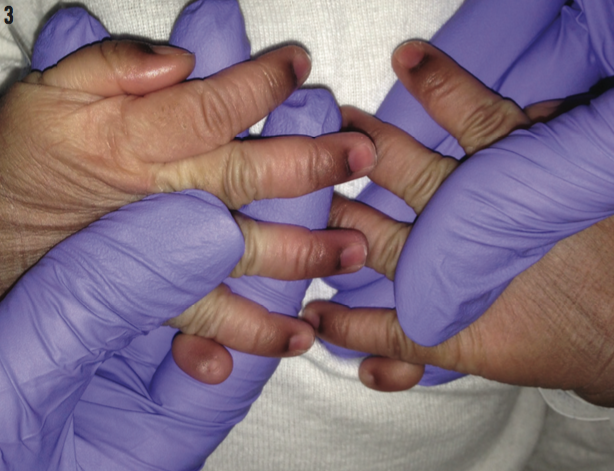 In postaxial polydactyly type A, the supernumerary digit is fully formed and articulates with the fifth (or additional) metacarpal or metatarsal.

The diagnosis is largely clinical, but radiographs usually are recommended to ensure that there is no bony involvement prior to the application of surgical clips, which is the definitive treatment for the condition.7

PAP-B can be associated with various genetic syndromes, but it often is a normal variant.

Dustin Paul, DO, and Ebony Beaudoin, MD, are at the University of Texas Medical School at Houston.