Attempting to fully understand the mechanisms that are in place to pay for pediatric health care services can be daunting. But the recent evolution of health care financing has made it increasingly important for pediatricians to grasp how they get paid for the care they provide. This is especially true for pediatric hospitalists, who oversee children who are the sickest—and thus, who are the most expensive to care for.

The main focus of the Affordable Care Act (ACA), signed into law by President Barack Obama in 2010, was helping uninsured adults either enter private insurance exchanges or become part of expanded Medicaid programs.

In general, the legislation left intact the four principal ways by which pediatric health care is financed—Medicaid, the Children’s Health Insurance Program (CHIP), private insurance, and self-pay/uninsured—although it does try to create incentives to ensure that fewer children are uninsured after passage of the law than before.

Medicaid was enacted as a voluntary program in 1965 as Title XIX of the Social Security Act (SSA). Prior to the passage of the ACA, in order for states to receive federal assistance, the Medicaid program mandated baseline health insurance coverage of children from birth to age 5 years with family incomes of up to 133% of the federal poverty level (FPL) (Table 1), and of school-aged children with family incomes of up to 100% of the FPL.1 As a result, in 2008 Medicaid covered almost 40% of U.S. children, and half of all U.S. births.1

Unlike Medicare, which is a federally financed program for the elderly and the disabled, Medicaid is jointly funded by the federal government and the state governments. The amount of federal Medicaid dollars given to each state is determined by the Federal Medical Assistance Percentage (FMAP), a formula based on the per capita income of each state compared with that of the rest of the country. The result of applying this formula is that richer states receive less assistance from the federal government than do poorer states. Importantly, Medicaid is an entitlement, meaning that people have a legally protected right to financial assistance if they qualify for it. So, for those who meet the enrollment criteria set forth by the state, federal funds essentially are guaranteed and unlimited. States generally are prohibited from any form of cost sharing, enrollment caps, or waiting lists.1

Medicaid requires comprehensive medical care for its beneficiaries and in that regard is far more robust than most private insurance plans. This includes Early and Periodic Screening, Diagnosis, and Treatment (EPSDT), long-term care, rehabilitation services, physical therapy, mental health, dental care, vision care, and durable medical equipment, among others.1 Despite accounting for 53% of enrollees, children and young adults (younger than 21 years) account for only 29% of Medicaid payments.2 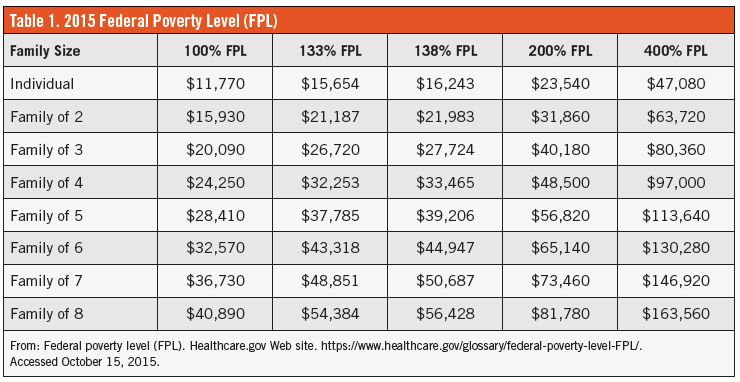 CHIP was passed as part of the Balanced Budget Act of 1997. It formed Title XXI of the SSA and was designed for children whose family did not qualify for Medicaid because its income exceeded limits, but whose family could not afford private coverage or did not have it available to them.3 CHIP initially was designed to cover children in families with an income of 200% of the FPL, but the law gave states great leeway. Thus health care providers should inquire about their own state’s arrangement in order to understand the opportunities and out-of-pocket implications for their patients’ families.

As of June 2013, 5.7 million children were covered by CHIP. Like Medicaid, CHIP is a joint venture of the federal government and state governments. However, unlike Medicaid, CHIP funds are capped at the national level, and each state is provided its funds by block allotment. Because of the finite amount of money available, CHIP is not an entitlement, and not everyone who qualifies for it will become a beneficiary. States may impose caps on enrollment and use waiting lists to control spending and keep costs down. Moreover, the federal match is higher in CHIP than in Medicaid, so the federal government shoulders more of the financial responsibility, about 70% in CHIP compared with 57% for Medicaid.1 CHIP also differs from Medicaid in that it must be reauthorized regularly or the program ceases (Table 2). Congress recently passed the Medicare Access and CHIP Reauthorization Act of 2015, which renewed CHIP for an additional 2 years. 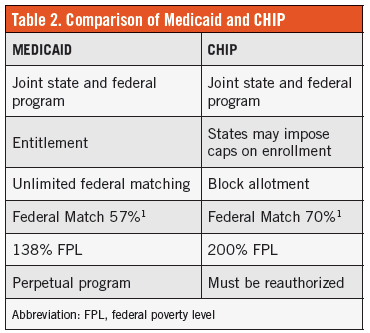 Private insurance can be either an employer-sponsored plan provided to a child’s parent or an individually acquired plan purchased directly from an insurance company. Employer-sponsored coverage of children has declined steadily over the last several decades, from approximately 80% in 1980 to a recent low of 55% in 2012,4 during which time increasing numbers of children have changed to public plans. There is debate about whether this association is a result of the expansion of public programs and employers’ election of this new, less-expensive insurance option, or whether it illustrates the loss of employer-sponsored plans and a subsequent migration to public payer programs by necessity.

Under the changes legislated by the ACA, all private child health insurance plans now must cover oral and vision services, like their Medicaid counterparts, and new insurance plans no longer can charge deductibles or require cost-sharing for preventive medicine or wellness benefits.4,5 This is significant, because the ACA also expanded private insurance coverage with the establishment of health care exchanges for children in families that do not qualify for either public programs but that otherwise cannot afford private coverage. Families earning less than 400% of the FPL are eligible for federal subsidies with the recent U.S. Supreme Court ruling in King v Burwell guaranteeing that these subsidies are available in all states, not only in states that operate their own exchanges. Another way in which the ACA is expanding private coverage is by allowing children to remain on their parents’ insurance plans up to the age of 26 and by preventing insurers from excluding from coverage children with preexisting conditions.5

A sizable minority of children aged under the age of 18 do not have health insurance coverage despite the mechanisms discussed above. In fact, almost 6 million children in the United States remained uninsured.6 The portion of children who continue to fall through the cracks of the insurance safety net are of particular concern to policymakers and health care providers. These are the children who are most likely to have delays in care and health problems that rise to the level of hospitalization as opposed to outpatient management. A proportion of this population consists of undocumented children who, without citizenship, are unable to benefit from public programs that seek to expand coverage opportunities for children.

Together, Medicaid and CHIP had reduced the rate of uninsured children in the United States to an unprecedented 7% by 2012.1 It was hoped that the ACA would reduce that rate even further. The new law required all states to cover children up to age 19 to 138% of the FPL in Medicaid, and it tried to extend the private insurance market to more children.1 The ACA has attempted to expand the insurance opportunities for children, but some concerning aspects of the law remain. The ACA discontinued the federal disproportionate-share payments to hospitals, because it assumed that all states would expand adult Medicaid coverage. Because the Supreme Court ruled that tying all federal Medicaid funding to this expansion was undue coercion, not all states have elected to do so. The result is that “states that choose not to participate in Medicaid expansion may risk the viability of some safety net hospitals.”2 This affects many hospitals that provide a high percentage of indigent care, many of which support children on public assistance.

Despite the new rule that children can remain on their parents’ insurance up to the age of 26 years, the rule does not apply to grandparents. This is particularly problematic for teenage parents whose own parents legally provide for their grandchildren. The other glaring problem with the child provisions in the ACA is the determination of federal subsidies for private plans purchased through the marketplaces. Subsidies are provided only for persons who do not have “affordable” workplace alternatives. The determination of affordability is based solely on the ability to afford self-coverage and not the more expensive family coverage plans. This “‘family glitch’ deprives families of help … and potentially leav[es] millions of children without access to affordable insurance.”4

Child health financing is full of promise as increasing numbers of U.S. children obtain coverage. Through public programs, millions of children are able to afford the care they receive, and private carriers continue to expand the products and services they support. The ACA has placed additional emphasis on the coverage of children, but pediatricians also should recognize the law’s limitations. It is important for pediatric hospitalists in particular to understand the different programs and financing mechanisms in order to understand the financial burdens of their patients and to become effective advocates for them.

John A. Kohler Sr., MD, is a neonatal-perinatal medicine fellow in the Department of Pediatrics at Duke University Medical Center in Durham, North Carolina.

The author thanks Bryan Fine, MD, for support and assistance in the preparation of this article.