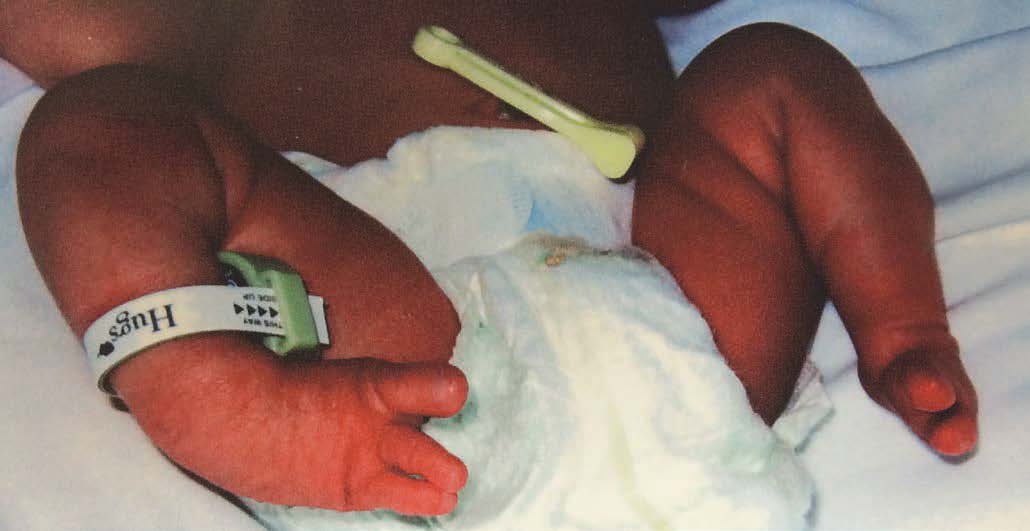 After delivery at full term and under aseptic and stable conditions, a newborn girl was noted to have significantly deformed lower limbs below her knees. Her left limb was much shorter than her right one, and both ankles were in severe equinovarus position. With 5 toes in a totally disorganized fashion and with significant polysyndactyly, the left foot appeared more deformed the right foot.

Her vital signs were stable, and she transitioned to regular nursery care easily. She was a product on nonconsanguineous marriage; the mother denied the use of any teratogenic drugs during pregnancy. There was no significant family history.

Fibular hemimelia is the most common deficiency of the long bones. The primary feature of the condition is fibular abnormality ranging from mild shortening to complete absence. In the most severe form, the fibula is absent, the distal third of the tibia is bowed anteriorly, and the foot is in equinovalgus position with absence of one or more lateral rays.1

Presentations can vary widely, ranging from what appears to be merely an absent fifth toe in a newborn, or a minimal difference in limb lengths that may go unnoticed throughout life, to severe fibular deformities that are immediately apparent.2 In one study of the arterial patterns of patients with hemimelia, the presence of dysplastic lower limbs and absent fibula was noted to be associated with the absence of the peroneal artery.3

It has been postulated that fibular hemimelia results from interference with limb bud development during the fourth to seventh week of fetal life.2 During fetal life, the fibular field of the limb bud controls the development of the proximal femur, explaining the frequent association of femoral abnormalities.2

Coventry and Johnson4 initially described fibular hemimelia in 1952 as being related to aplasia or hypoplasia of the fibula and developed a classification system: In type 1, only one limb is affected, with partial absence of the fibula and no bowed tibia or foot deformity. The defect is visible only on radiologic examination. Type 2 features unilateral or bilateral small or miniature fibula, anteromedial bowing of the tibia, and the absence of lateral rays of the foot. Moderate to marked limb shortening is present. Type 3 features unilateral or bilateral absence of the fibula, along with hemivertebrae. 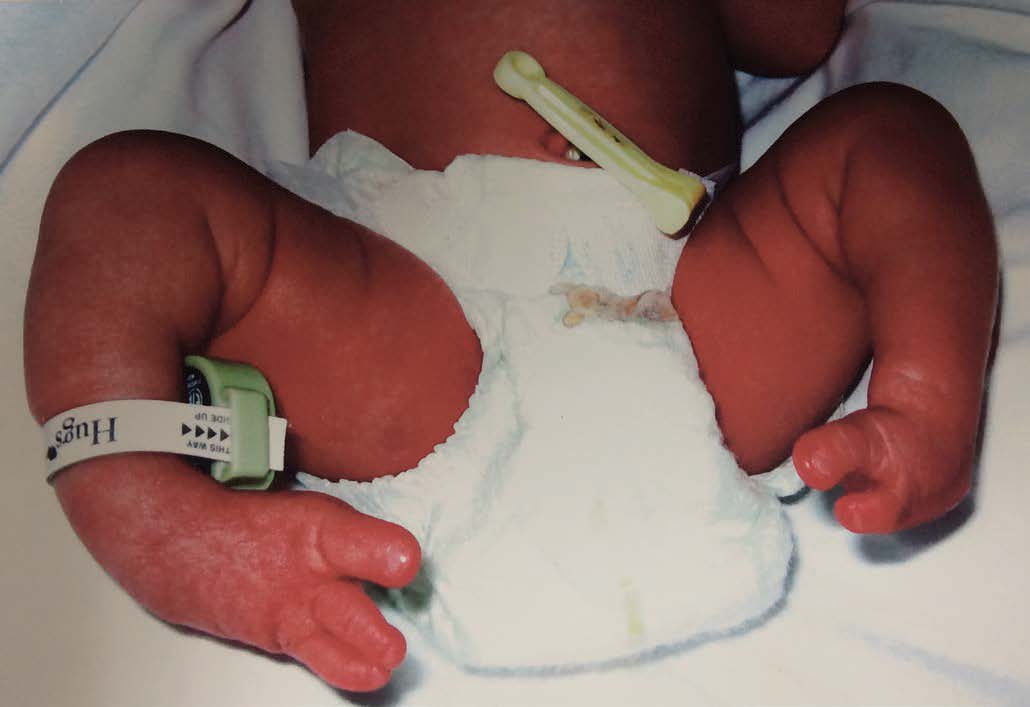 Using the Achterman and Kalamchi classification, our patient had type II fibular hemimelia, with complete absence of the fibula.

Treatment must be individualized based on the severity of the deformity and on the presence or absence of associated deformities. The goal of treatment is to increase the patient’s functional status while improving the cosmetic aspect of the deformity. Ideally, limb lengths should be equalized while providing a plantigrade foot for ambulation. This is not always possible in patients with severe deformity, in whom amputation is inevitable.6

In patients fulfilling the criteria for amputation, a Syme amputation (disarticulation of the ankle with removal of the malleoli of the tibia and fibula) is performed. Elongation is performed in patients with type IA or IB fibular hemimelia, with a functional foot with more than 3 rays, leg shortening less than 5 cm at birth, and leg shortening less than 10 cm at 9 years of life.7