Fibroepithelial Polyp of the Nipple

A 41-year-old woman presented to a dermatology clinic after having been referred by her primary care physician for evaluation of a slowly growing, asymptomatic lesion on her left nipple. The patient stated that the lesion had first appeared when she was 16 years old and had remained stable in size for many years. However, over the past 3 years, she reported that the mass had slowly enlarged. The lesion periodically became mechanically irritated and inflamed, a condition that would self-resolve in 1 to 2 days. She denied associated bleeding, discharge, or pain.

On physical examination, a 2.2-cm, soft, skin-colored, exophytic, polypoid nodule was present on the superior aspect of the left nipple. The lesion was nontender and was attached to the nipple by a 5-mm stalk. Local anesthesia was provided by lidocaine with epinephrine injection, and shave biopsy was performed. A full-thickness defect was seen, so the base of the lesion was closed with 4-0 silk sutures.

The specimen was submitted for pathology testing with the preoperative diagnosis of neurofibroma. However, the pathology report revealed the lesion to be a fibroepithelial polyp (FEP).

Discussion. Benign tumors of the nipple such as FEP (also known as acrochordon, skin tag, and soft fibroma) present a diagnostic challenge due to the rarity of growths arising in this area. For example, only 7 cases of FEP of the nipple have been reported in the literature.1-6 Moreover, the list of differential diagnoses for benign nipple lesions is vast and includes adnexal polyp, supernumerary nipple (if located on the areola), neurofibroma, adenoma, papilloma, pedunculated seborrheic keratosis, wart, leiomyoma, milia, and epidermal cyst.7 A number of these entities, such as adenoma, neurofibroma, papilloma, and FEP, can be grossly similar to each other and require histologic examination for definitive diagnosis.

Typical histologic features of FEPs are a hyperplastic epidermis surrounding a core of fibrovascular tissue with dense collagen fibers.3 Moreover, certain entities such as nipple adenoma, while benign, require complete excision to prevent recurrence.8 Based on a recent literature review7 but not on epidemiologic data, benign tumors of the nipple are believed to be much more common than malignant tumors. Nevertheless, it is important for primary care providers to recognize and diagnose benign nipple lesions so as to reassure patients and institute appropriate management.

Features that make a nipple malignancy more likely are overlying epidermal changes, abnormal discharge from the nipple, inflammation, pruritus, pain, nipple inversion, and bleeding.7,8 A patient’s age also can be an important diagnostic clue, since the incidence of benign breast lesions increases in the teenage years and peaks in the 30s and 40s.7,8 In contrast, the incidence of malignant breast lesions continues to increase with age. Benign lesions also tend to have a longer time course, as seen in our patient’s case, while malignant lesions usually arise in a shorter time course.

When faced with a patient with a benign-appearing nipple lesion, the recommended steps include a complete history; clinical examination of the nipples, breasts, and axillae; consideration of diagnostic imaging (eg, ultrasonography, magnetic resonance imaging), and excisional biopsy.7

Management of FEP of the nipple is with simple excision. The specific technique of excision will depend on whether the lesion is pedunculated or flush with the skin. Pedunculated lesions can be treated with snip excision, while lesions that are not pedunculated can be treated with shave excision. While FEPs are completely benign, mechanical irritation is common, and twisting of the stalk can lead to blister formation.6 The benefits of excision include improved cosmesis, reduction of mechanical irritation, and reassurance of the patient. 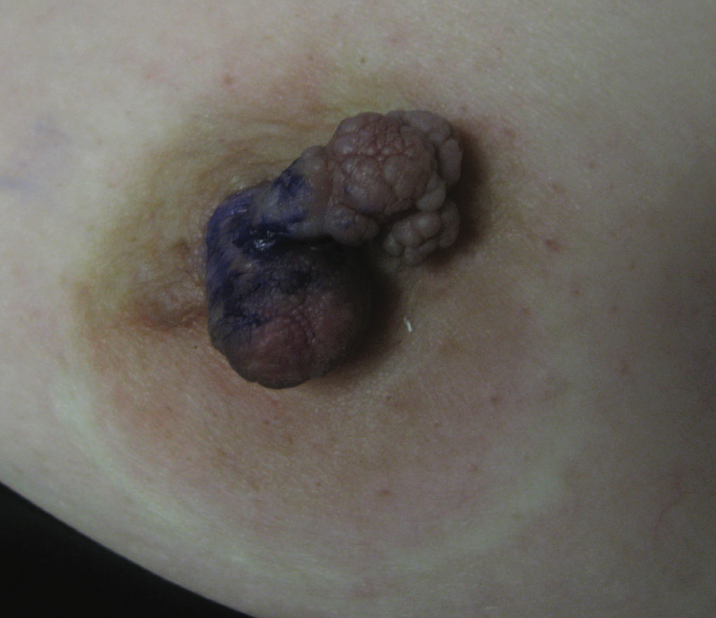 Figure 1: A 2.2-cm, soft, skin-colored, exophytic, polypoid nodule on the superior aspect of the left nipple. The inferior pole of the pedunculated lesion has been marked with blue ink prior to excision.

Outcome of the case. No further treatments were required for this patient, since surgical excision is the definitive treatment of FEPs. No long-term follow-up visits were needed, and she has not had a recurrence.