Fever, Rash, and Pancytopenia in an 11-Year-Old Boy: What’s the Cause?

An 11-year-old boy was referred to our hospital with 2-week history of fever, pancytopenia, and rash. The rash had developed on his face one month prior to presentation, and the child had been started on benzoyl peroxide for suspected acne. Despite this treatment, the rash continued to progress and involved the ears, shoulders, back, and forearms. He was prescribed oral acyclovir because of concern for eczema herpeticum. The boy then developed fevers, generalized myalgia, fatigue, and knee pain.

Physical examination revealed a number of erythematous papules with ulceration, scaling, and crusting over the cheeks and ears bilaterally. He also had erythematous papules and patches scattered over his shoulders, forearms, and upper back. He had swelling with effusion of the right knee joint and a painless ulcer on his hard palate.

The results of laboratory evaluation revealed hemolytic anemia (indicated by a hemoglobin level of 10.3 g/dL), leukopenia (700 cells/mm3), and thrombocytopenia (96,000 cells/mm3). Urinalysis results were positive for proteinuria. An antinuclear antibody (ANA) test was positive with a titer of 1:160. Antiphospholipid antibody panel results were positive, and his renal biopsy indicated mesangial proliferative lupus nephritis.

What is the cause of this boy’s fever, rash, and pancytopenia?

The patient’s presentation was consistent with systemic lupus erythematosus (SLE). SLE is a rheumatic disease characterized by autoantibodies directed against self-antigens and immune dysregulation, resulting in multiorgan-system disease. 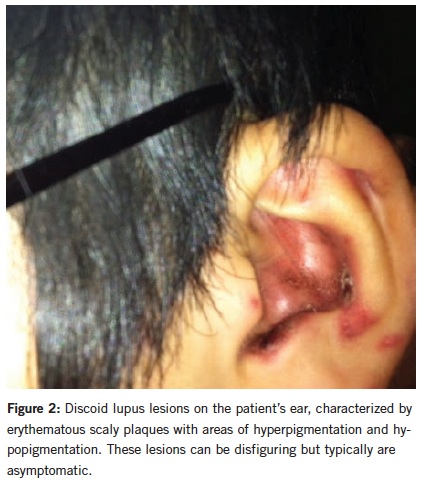 The clinical diagnosis of SLE is based on the American College of Rheumatology criteria, which include the following: malar rash; discoid rash; pleuritis or pericarditis; oral ulcers; arthritis; a positive ANA titer; photosensitivity; proteinuria or evidence of nephritis; hemolytic anemia, thrombocytopenia, leukopenia; positive anti–double-stranded DNA, anti-Smith, or antiphospholipid antibody/lupus anticoagulant test results; and seizure or psychosis. Of the 11 listed criteria, 4 are sufficient for classification.

Our patient was treated with intravenous methylprednisolone sodium succinate followed by oral prednisone, mycophenolate mofetil, hydroxychloroquine, and aspirin, after which he improved significantly. 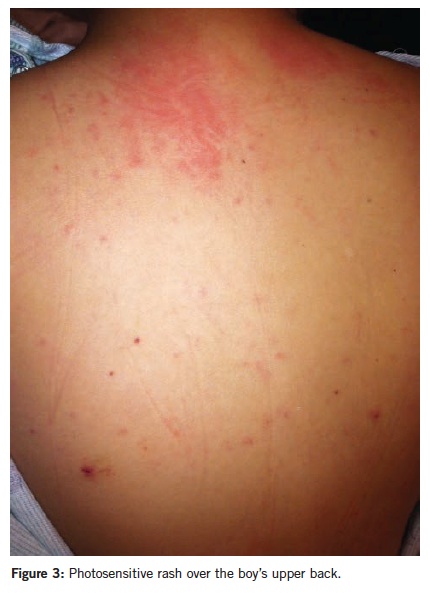 Dr Sukumaran and Dr Vijayan are in the Division of Immunology, Rheumatology, and Infectious Diseases in the Department of Pediatrics at the University of Florida in Gainesville.

Kirk Barber, MD, FRCPC––Series Editor: Dr Barber is a consultant dermatologist at Alberta Children’s Hospital and clinical associate professor of medicine and community health sciences at the University of Calgary in Alberta.