Fever and Vesicular Rash: Which Virus?

A 16-month-old girl presented to the emergency department with a 3-day history of fever and a rash. The rash had started as erythematous papules in the diaper area and then had spread to her arms, hands, legs, feet, and face. Her parents reported that she had not been scratching at the rash and that her maximum rectal temperature had been 38.2°C. Recently at day care, the girl had been exposed to other children with an acute febrile rash.

The girl’s immunizations were up to date, including the varicella vaccine at age 12 months. At presentation, she was playful and in no distress. Her temperature was 38°C rectally, and her heart rate was 120 beats per minute. She had a generalized, erythematous, vesicular rash that was most prominent and confluent on her lower abdomen and buttocks. Crusted vesicles were present at the base of her nares. Her conjunctivae were normal, and no lesions were noted in the oropharynx or on the lips. Physical examination findings were otherwise unremarkable. 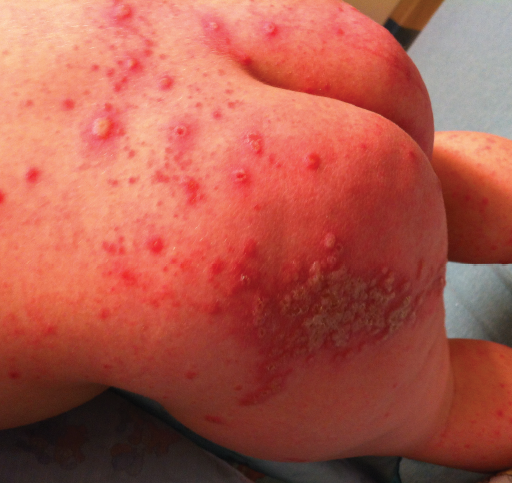 Enterovirus was detected by polymerase chain reaction (PCR) assay of a vesicle fluid sample. We were not able to cultivate virus in cell culture, however. Many group A coxsackieviruses grow poorly or not at all in vitro.1 Although the PCR product was not sent to the Centers for Disease Control and Prevention for partial sequencing of the VP1 gene, we nevertheless were suspicious that her rash was caused by coxsackievirus A6, which at the time had been reportedly causing outbreaks of severe hand-foot-and-mouth disease (HFMD) among young children in child-care centers.2

Acetaminophen and ibuprofen were prescribed for the fever and for symptomatic relief. Her rash resolved in 2 weeks with no residual scarring. A few weeks later, she shed her fingernails and toenails.

The differential diagnosis of a generalized, vesicular rash in a febrile child includes chickenpox (varicella), disseminated zoster, eczema herpeticum, and herpetiform exanthems associated with coxsackieviruses and echoviruses.3 The rash of chickenpox is intensely pruritic and may be more concentrated centrally on the trunk and proximal extremities.4 Our patient’s rash was not itchy, and she had received 1 dose of the varicella vaccine, which is approximately 85% effective in preventing infection.5 Disseminated zoster most often develops in children with congenital T lymphocyte defects or in children with AIDS.4 These children frequently have visceral involvement with pneumonia and hepatitis. Our patient did not have a history of serious infections, and physical examination findings were concerning only for the rash. Persons with eczema who are infected with herpes simplex virus may develop eczema herpeticum with vesicular lesions concentrated in the areas of eczema.6 Our patient, however, did not have eczema.

Coxsackieviruses and echoviruses cause a variety of exanthems, which may be classified as maculopapular, petechial, or vesicular.7 Coxsackievirus A16 is the most common cause of the distinctive vesicular rash of HFMD. Classically, HFMD affects young children and occurs during the warm months in the United States.8 Children with HFMD have fevers from 38°C to 39°C that last 1 to 2 days and have mildly painful vesicles on the tongue and buccal mucosa that eventually ulcerate.7 Approximately 75% of children with HFMD have vesicular lesions on the extensor surfaces of the hands and feet and sometimes on the buttocks or genitalia. Coxsackievirus A9 and echovirus 11 have been reported to cause more generalized herpetiform eruptions that occur in crops.9,10 Unlike those of chickenpox, the vesicles of HFMD resolve by absorption of fluid and do not form crusts.11

In recent years, coxsackievirus A6 has been reported to cause a variant of HFMD with atypical features.12-14 Outbreaks were reported in several states in the winter of 2012,2,15 which might have been related to unusually mild temperatures in parts of the United States that year. During this outbreak, vesicles were reported in approximately 70% of patients.2 Perioral and perirectal papular rashes that often impetiginized with secondary crusting also were noted.15 In general, the rash was more extensive and hospitalization was more common than with typical HFMD.2 Onychomadesis (loss of nails) may occur 1 to 2 months after the initial presentation.12,14 Our patient’s illness had many of these features, including crusted vesicles at the base of her nares, a cluster of vesicles on her right buttocks that resembled zoster, and late desquamation of her nails.

Enteroviral infections should be considered in the differential diagnosis in patients who present with fever and a generalized vesicular rash. The patient’s immunization status should be reviewed, and he or she should be questioned about any contact with persons with similar symptoms. PCR of a sample of the vesicle fluid is a rapid and sensitive test to distinguish enteroviral infection from varicella and herpes simplex infections when a patient’s history, epidemiologic clues, and physical examination findings do not suggest a specific etiology.