Fecaloma in a Young Boy

A 4-year-old boy with chronic constipation presented to the pediatric emergency department with abdominal pain and no bowel movement for 4 days. The patient has been given polyethylene glycol intermittently to aid in bowel movements. The parents of the patient reported that the child was otherwise healthy, and they denied that he had any nausea, vomiting, or fever.

On physical examination, the patient’s lower abdomen appeared distended with some tenderness localized to the lower abdomen. A firm mass was palpable over the right lower and hypogastric quadrants with well-defined margins and hyperactive bowel sounds. There was no rebound tenderness, guarding, or rigidity. Obturator and psoas signs were negative and there was no hepatosplenomegaly. The remainder of the physical examination results were unremarkable. 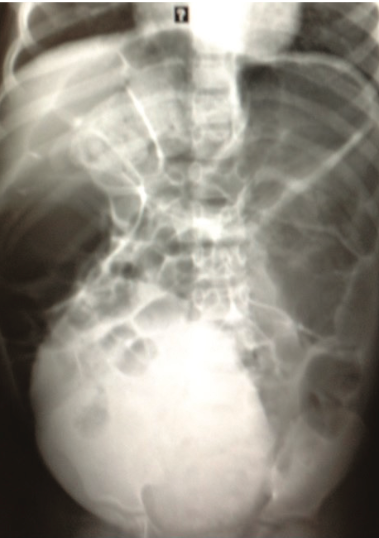 Fecaloma results from the accumulation of fecal material and can include intestinal debris and deposits of calcium soaps.5 Fecal matter accumulates in the intestine, then stagnates and increases in volume until the intestine becomes deformed and acquires characteristics similar to those of a tumor.6 Complications include colonic obstruction, perforation, sciatica, ureter obstruction, secondary hydronephrosis, and deep vein thrombosis.7

Patients with fecalomas can be managed conservatively with laxatives, enemas, and digital evacuation. When these measures fail, surgical intervention is often required.7,8 However, Lee and Kim9 reported a case of a fecaloma that was successfully removed by endoscopic fragmentation with Coca-Cola injection instead of surgery.n

Nisha Polavarapu, MD, and Noah Kondamudi, MD, MBA, are from the department of pediatrics and emergency medicine at Rutgers New Jersey Medical School in Newark.