DISCLAIMER:
None of the authors have any conflict of interest, financial or otherwise, to disclose.
The opinions expressed are solely those of the individual authors and do not necessarily reflect those of the Government of the United States, the Department of Defense, or the US Army.

A 31 year-old White man presented to the internal medicine clinic after extensive workup for infertility over the previous 7 years, to include evaluation by endocrinology and urology resulting in the diagnosis of azoospermia by 2 separate semen analyses. The patient denied any significant medical history, developmental delays, trauma, or substance abuse. On specific questioning, he endorsed very mild, intermittent numbness and tingling in the digits of upper and lower extremities, and a rash on his groin (Figures 1-3). 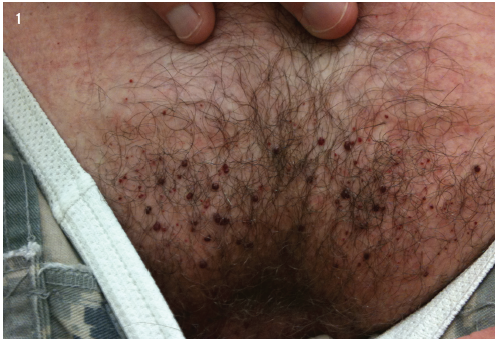 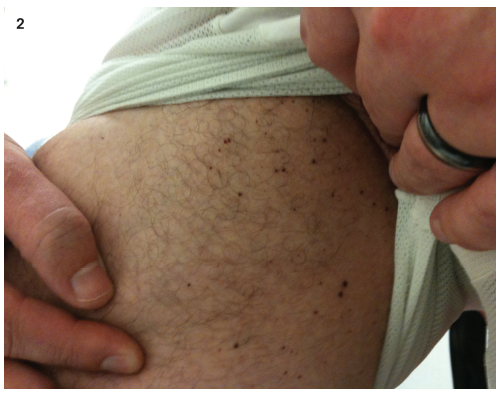 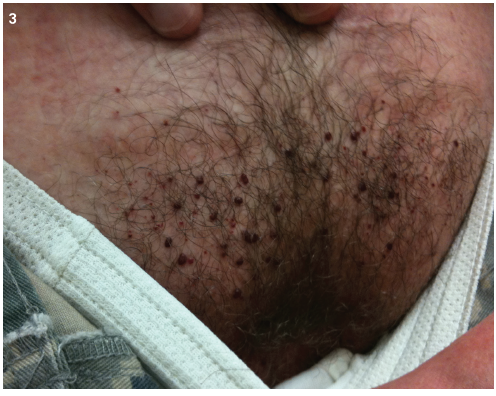 Figures 1-3. Angiokeratomas of the groin and inner thigh.

Physical examination. Results revealed normal cardiac and pulmonary auscultation, and normal external genitalia.  Gross ophthalmologic and dermatologic examinations were remarkable for corneal opacities in a whorl-like pattern and diffuse, dark-red papules over the surface of the lower abdomen and groin.

Diagnostic testing. No significant hormonal, chromosomal, or structural abnormalities were identified.1 Serum creatinine, urinalysis, and an echocardiogram showed no evidence of renal or cardiac involvement. Findings on testicular biopsy showed normal spermatogenesis with thickening of the seminiferous tubules.

Patient outcome. The diagnosis of Fabry disease was confirmed by low serum α-galactosidase A enzyme level. DNA sequencing of the GLA gene found a G>C substitution at exon 1, c.132 (G>C), a rare mutation associated with a dominant inheritance pattern.2 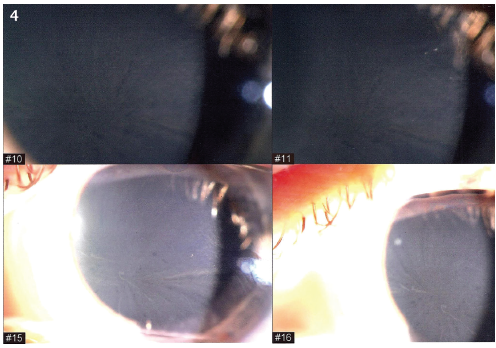 Figure 4. Cornea verticillata in the eye.

Discussion. Fabry disease is a lysosomal storage disease which results from an X-linked recessive defect in the GAL gene leading to a deficiency of α-galactosidase A with subsequent accumulation of globotriaosylceramide (Gb3).3 Clinically, the disease may present with dermatologic, neurologic, renal, and cardiovascular manifestations, however, several publications have suggested an association with infertility in affected males. The proposed mechanism for this association is Gb3 accumulation in the Leydig cells and seminiferous tubules of the testes.4

While involvement of the reproductive system has been described as a pathologic finding in Fabry disease on autopsy5, it is thought to occur very late in the disease course and is an exceedingly rare clinical association. One very small cohort study failed to find any associated hormonal abnormalities or infertility in males or females affected with Fabry.6 However, there have been several reported cases of decreased male fertility, including two instances of azoospermia associated with the disease.4,7

We are unaware of any case reported in the literature in which infertility and azoospermia were the presenting complaints, which led to the diagnosis of Fabry disease in a patient with no significant involvement of any other internal organ system. The findings in this case may suggest earlier involvement of the reproductive system than was previously thought. More research is needed to determine whether this involvement is present at a sub-clinical level in a significant number of Fabry patients. The case also represents a unique opportunity to gain a new perspective on the effect of enzyme replacement therapy, which has already shown promising results in preventing and treating other complications of this poorly understood disease.8