External Jugular Vein Thrombosis in an Adolescent With Lemierre Syndrome

A 17-year-old girl presented to the emergency department with bilateral ear pain, worsening dysphagia, and throat pain of about 7 days’ duration. She also had fever.

Physical examination revealed a temperature of 39.5ºC (103.1ºF), blood pressure of 95/49 mm Hg, heart rate of 104 beats per minute, respiration rate of 20 breaths per minute, and oxygen saturation of 97% on room air. She had a muffled, high-pitched voice. Head and neck examination revealed pain and decreased range of motion of the neck with 3+ enlarged right tonsil and normal left tonsil without uvular deviation. The remaining examination findings were normal.

Initial laboratory results showed an elevated white blood cell count of 22,700/µL; a hemoglobin level of 11.7 g/dL, hematocrit of 32.6%; and platelet count of 66,000/µL. Electrolyte and initial liver enzyme levels were normal. The patient received 1 g IV ceftriaxone and was transferred to our center for further management. 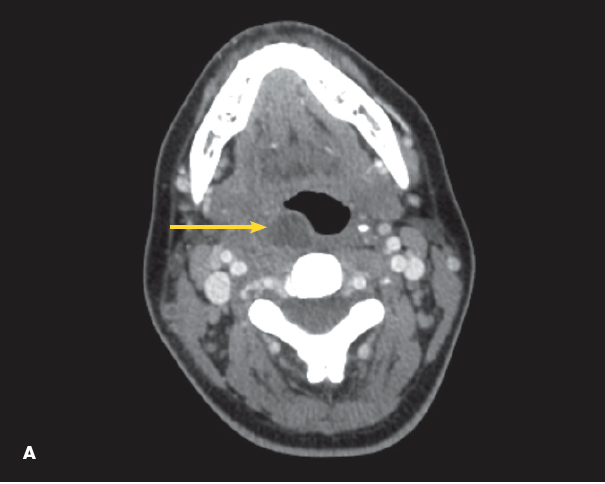 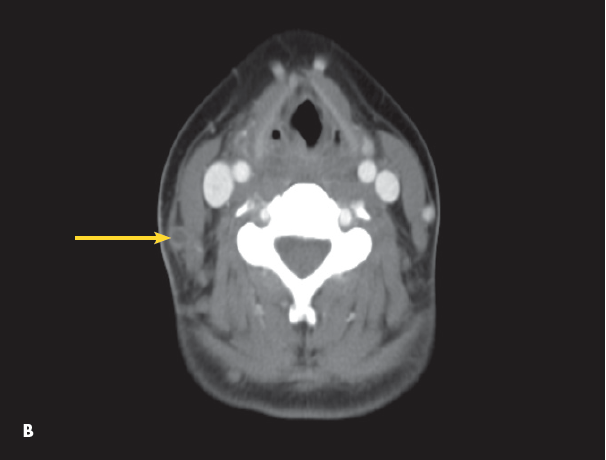 Figure. A CT scan of the neck with contrast showed a right parapharyngeal abscess (A, arrow) and thrombosis of the right external jugular vein (B, arrow).

After drainage of the right parapharyngeal abscess, respiratory distress with hypoxia developed. A CT scan of the thorax revealed septic emboli to the lungs. Serial chest radiographs showed bilateral opacities and pleural effusions more prominent on the left side and left lower lobe pneumonia. Ultrasound-guided thoracocentesis was performed and 660 mL of nonclotting, serosanguinous fluid was drained. The patient required transfusion with 2 units of platelets and 1 unit of packed red blood cells during the course.

Because of increasing hepatic enzyme levels, the patient’s antibiotic therapy was switched to ampicillin/sulbactam. She was hospitalized for 19 days and discharged home to continue treatment through a peripherally inserted central catheter for 6 weeks. She received anticoagulation with LMWH for 3 months.

At 3-month follow-up, circulating anticoagulant and lupus anticoagulant were no longer detectable; factor VIII activity was persistently elevated at 230% (from 350%) but normalized after 9 months. Chest radiograph findings at treatment completion were normal, and a second CT scan of the neck with contrast showed resolution of the right parapharyngeal abscess and patent bilateral IJVs. The right EJV appeared smaller in caliber but patent.

Lemierre syndrome, also known as postanginal septicemia or necrobacillosis, classically consists of oropharyngeal infection with bacteremia and suppurative thrombophlebitis of the cervical veins complicated by metastatic septic emboli.1 Andre Lemierre first characterized the disease in 1936 in a series of 20 cases.1,2 The mortality rate at that time was 90%.

The usual etiologic agent, Fusobacterium necrophorum, is a normal inhabitant of the oral cavity, female genital tract, and GI tract.3 Other organisms, including Bacteroides species, Peptostreptococcus species, group B and C streptococci, Streptococcus oralis, Staphylococcus epidermidis, Enterococcus species, Proteus mirabilis, Eikenella corrodens, Lactobacillus species, and Candida species, have been reported to cause a Lemierre-like syndrome, and the infection may be polymicrobial.3-5

When pretreatment with antibiotics is given before a blood culture is obtained, as in this case, the blood culture may be negative. Serious thrombotic complications are associated with this syndrome and may involve nearly all body systems, but commonly the IJV.6 EJV thrombosis is a rare complication of Lemierre syndrome.1,7-10

Thrombosis in Lemierre syndrome and Lemierre-like syndromes is likely to be a multifactorial process that may result in chronic complications.6 An underlying prothrombotic tendency may be caused by genetic mutations (ie, factor V Leiden mutation) or by increased lipoprotein or factor VIII activity and antiphospholipid antibody production.1,11 This is consistent with the results in this case, including elevated factor VIII activity and detectable anticardiolipin and lupus anticoagulant antibodies. The D dimer level was only slightly elevated. This is in contrast to other thrombotic disorders in which values much greater than 1.0 mg/L represent elevated thrombolysis

In addition to inherent host factors, another proposed mechanism of thrombosis in patients with Lemierre syndrome is vascular inflammation associated with infection adjacent to the jugular veins. Fusobacterium is known to induce endothelial damage and cause platelet aggregation factor effects,5,7 which may increase thrombosis risk.

Thrombosis of the jugular veins may be secondary thrombophlebitis of the tonsillar veins from underlying pharyngeal infection, causing thrombus propagation to the IJV—and potentially to the EJV—or cause perivenous inflammation.1,4 EJV thrombosis may represent an extension or progression of the inciting infectious process with associated venous stasis and thrombophlebitis occurring in anatomical close proximity to the more commonly involved IJV via connecting venous vasculature. 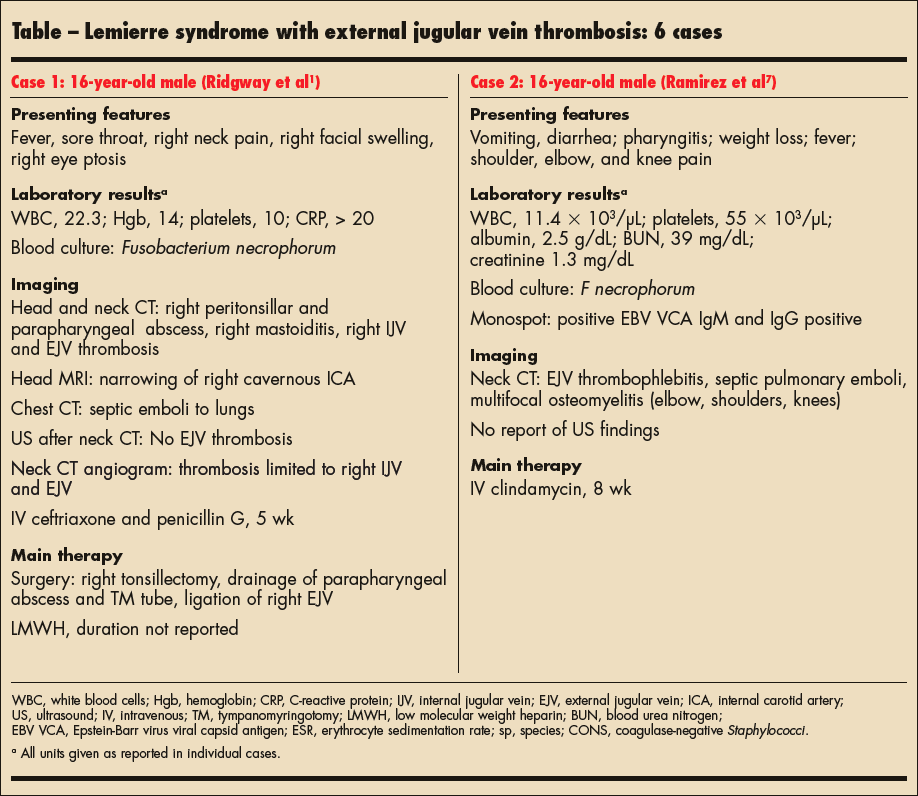 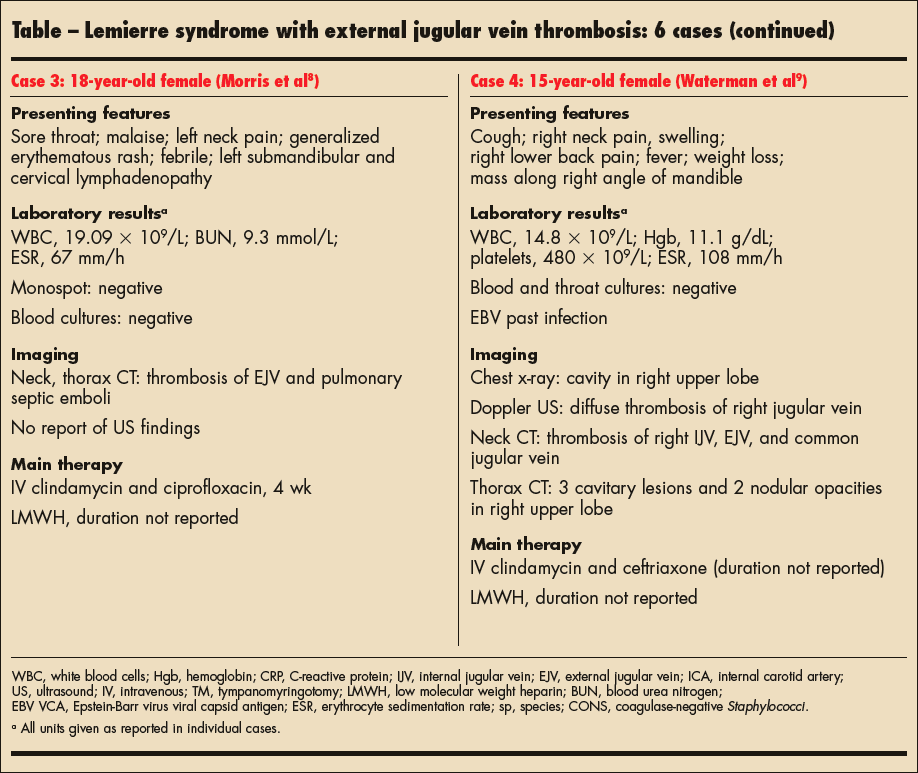 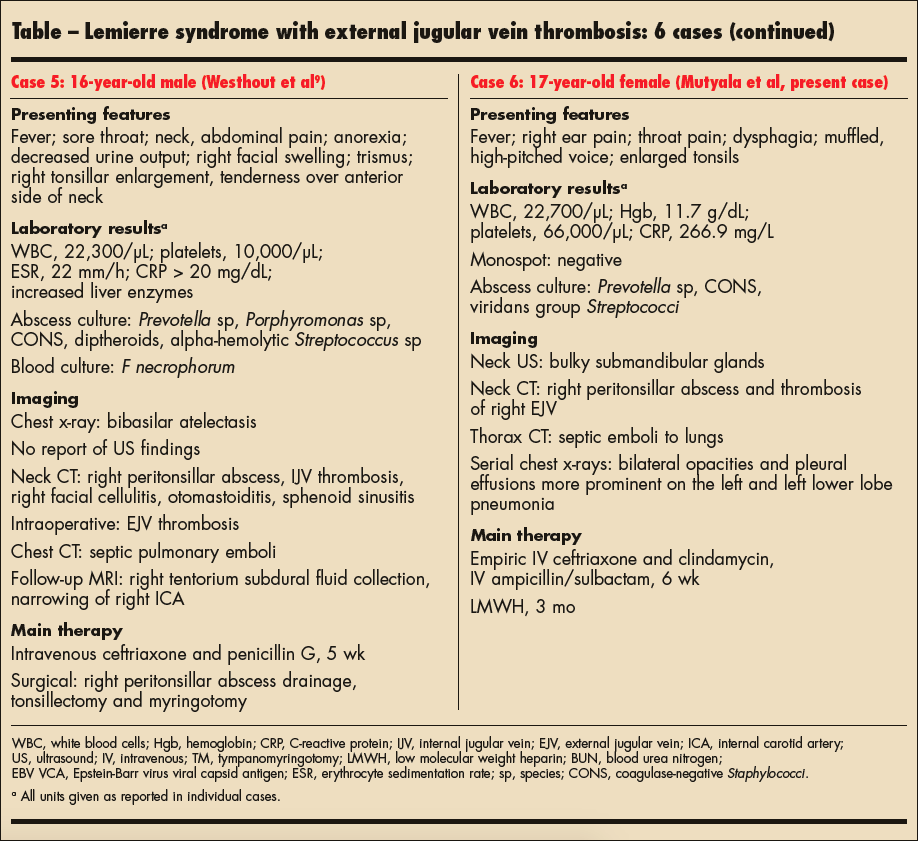 All 6 cases had evidence of septic pulmonary emboli on chest imaging. Four of the 6 patients, including our patient, received anticoagulation therapy, namely with LMWH, with varying degrees of return of patency.1,8,9 All 6 patients were treated with prolonged intravenous antibiotics and had apparent recovery at therapy completion.

Anticoagulation in Lemierre syndrome is controversial.4,6 Anticoagulation may help rapidly dissolve septic emboli and thrombi and may potentially limit the duration of bacteremia and propagation of further embolic events leading to less chronic vascular occlusion.6,7 However, consideration must be given to the risk of bleeding in the setting of thrombocytopenia (such as in our patient), and particularly after septic brain emboli. Although it took 9 months for factor VIII activity to normalize in our patient, the right EJV thrombus resolved after only 3 months of anticoagulation therapy.