Exercise for Patients With Diabetic Peripheral Neuropathy: Getting off on the Right Foot

Author:
John Whyte, MD, MPH
Former medical advisor at the US Department of Health and Human Services in Washington, DC, and director of the Secretary’s Council on Private Sector Initiatives. He is currently the chief medical expert and vice president, health and medical education, at Discovery Channel in Silver Spring, Maryland.

Citation:
Whyte J. Exercise for patients with diabetic peripheral neuropathy: Getting off on the right foot. Consultant. 2013;53(8):594-600.

ABSTRACT: For patients with diabetes, peripheral neuropathy is one of the most debilitating complications. Patients experience losses in sensation, balance, and walking ability, and they are at greater risk for foot ulceration and falls. Fortunately, patients can combat—and even prevent—diabetic peripheral neuropathy by following a regular exercise routine. Aerobic exercises, such as running or swimming, strength training exercises, functional training, and tai chi have all been shown to improve symptoms, whether by decreasing pain and neuropathic symptoms or by increasing function and nerve conduction. In addition, exercise improves glucose control and combats other complications related to diabetes, such as obesity and hypertension, thus making it a cornerstone of any diabetic patient’s treatment.

Peripheral neuropathy is a serious complication of diabetes that affects nearly 50% of diabetic patients.1 It is the most common form of neuropathy, and it can present in numerous ways: symmetric or asymmetric, autonomic or peripheral, sensory or somatic.2 Patients can suffer from burning, stabbing, or tingling sensations, eventually progressing to muscle weakness and painless numbness.1 Nerve damage is believed to be caused by a combination of metabolic and vascular factors resulting in nerve fiber loss.1 Total costs associated with diabetic peripheral neuropathy in the United States reach $10.9 billion per year.3

Patients with diabetes face many challenges in their care: in addition to monitoring their blood glucose and adhering to multiple medications, they are also expected to maintain a careful diet and exercise regularly. This can be difficult, and adherence to exercise programs by diabetic patients can be as low as 10%.4 Furthermore, for those patients who have peripheral neuropathy related to their diabetes, keeping up with an exercise regimen is even more challenging because they are vulnerable to pain, ulceration, amputation, and falls.5

Despite these difficulties, exercise contributes to improved glucose control—which slows or stops the progression of diabetic neuropathy—among other benefits.6 Although current treatments for diabetic neuropathy have not been proven to reverse pathogenesis and progression and are thus aimed largely at pain control,6 it is still worthwhile to explore the benefits that exercise has to offer and promote exercise to patients as a viable therapeutic option.

Short- and long-term benefits. Lifestyle interventions, including exercise, are the first line in diabetes treatment. Acutely, exercise reduces blood glucose levels via uptake of glucose into active muscles. Exercise also stimulates glucose transporter type 4 (GLUT4) translocation, enhancing glucose uptake into muscle cells and compensating for impaired insulin sensitivity associated with diabetes.7 Although both aerobic and resistance exercise offer benefits to the patient with diabetes, a combination of the two may be more effective in controlling blood glucose.7 Exercise also enhances insulin action for 2 to 72 hours.7

In addition to short-term improvements in glucose control and insulin action, exercise over the long term reduces low-density lipoprotein cholesterol levels and systolic blood pressure in diabetic patients; it also ameliorates symptoms of depression and improves health-related quality of life.7 Given its effects on blood glucose regulation—and the role that tight glycemic control plays in preventing diabetic neuropathy—exercise should be considered a mainstay of treatment for this complication of diabetes.

Prevention of neuropathy. The best way to treat diabetic neuropathy is to prevent it from developing in the first place. This is crucial because 10% to 18% of patients already exhibit neuropathic findings on nerve conduction studies at the time diabetes is diagnosed, which suggests that nerve damage occurs early in the development of the disease.8 In practical terms, this means it is doubly important to start patients on an exercise program at the time of diagnosis—not only to aid in glucose control but also to prevent the progression of this dire complication that may already have begun developing.

In a comparison of diabetic patients without baseline signs or symptoms of neuropathy, those who spent as few as 4 hours per week performing mild-intensity aerobic exercise had a significantly lower likelihood of developing motor and sensory neuropathy compared with diabetic patients who did not exercise.9Specifically, the type of exercise performed in the study was brisk walking (Table 1), which is simple enough to be done by any patient without prior training or special equipment. However, any form of aerobic exercise can modify or prevent the development of neuropathy. This occurs in the absence of changes to body mass index and waist circumference, which suggests that neural health benefits can be achieved at lower exercise intensity and without the dietary control needed for weight loss. The mechanisms underlying neuroprotection in the exercise group are unclear, but theories involving increased endoneurial blood flow, increased nitric oxide synthesis, and improved Na+/K+-ATPase activity with exercise attempt to provide an explanation.9 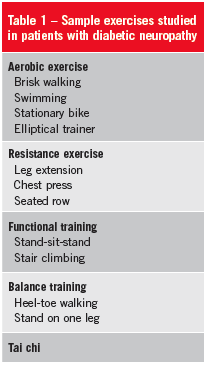 Management of symptoms. Unfortunately, prevention is not possible in all patients. However, exercise can also help patients manage symptoms after they have already begun. Research demonstrates that physical exercise, such as running on a treadmill for 30 to 60 minutes daily, is associated with an increase in heat shock protein 72.10 This protein is released in response to exercise and is associated with improved tolerance to stressors.11 It is believed that increased levels of this protein allow for better health of the nerves in the feet of patients with diabetic neuropathy.10

Patients who performed a combination of aerobic and strength training exercise 3 or 4 days per week achieved significant reductions in pain and neuropathic symptoms after 10 weeks.12 Aerobic exercise included treadmill, stationary bike, or elliptical trainer for 30 to 50 minutes; strength training included weight machines targeting many different muscle groups for 10 to 20 repetitions per exercise. Further evidence of the response of peripheral nerves to exercise is provided by biopsy measurements of nerve fiber branching, which increased after a 10-week exercise program.12 This indicates that exercise induces physical changes to nerve structure as a means of altering disease progression and improving symptoms.

Improvements in function. In addition to pain, there are other serious functional problems that result from diabetic neuropathy. Many patients walk more slowly and less confidently and have poorer balance, weaker leg muscles, and shorter ranges of motion in the lower limbs.13

Patients who underwent an exercise program that targeted these problems achieved significant success. After exercising for 60 minutes twice a week for 12 weeks, these patients improved in all measures.13 Their regimen was composed of functional training—everyday tasks that can be simulated in an exercise program. For example, to work on endurance, patients repeatedly sat down and stood back up or climbed stairs. To work on balance, patients walked heel-to-toe or stood on one leg.

A 6-week program of stretching, balance, and strengthening exercise focused on the lower limbs also helped patients achieve functional improvements.14 These patients demonstrated faster foot reaction times to visual stimuli, improved leg strength, less sway, and a reduced risk of fall.14Exercises focusing on stability, such as toe raises and heel raises, also had a positive effect on balance after just 3 weeks.15 Patients with diabetic neuropathy who performed these exercises improved their balance and functional reach performance, even though these benefits were not seen in age-matched controls.15 Though simple, functional exercises are remarkably effective and can be done by anyone with little or no equipment required.

Alternatively, there is evidence that supports tai chi as an effective form of exercise for improving balance and diabetic neuropathy symptoms.16 This is probably because tai chi incorporates balance and proprioception, which are compromised in patients with neuropathy.

Studies that examined the effects of tai chi in patients with diabetic neuropathy demonstrated significant increases in quality of life and improvements in glucose control, balance, and neuropathic symptoms. Patients in these studies performed tai chi 2 or 3 times per week for 12 weeks.16,17 Nerve conduction velocities improved in the diabetic patients; however, no nerve conduction improvements were seen in non-diabetic adults.17 Another study also showed that neuropathic patients who perform tai chi or yoga have improved peripheral nerve conduction velocities.18

Next Page: How to Address Patient Concerns

HOW TO ADDRESS PATIENT CONCERNS

Despite these benefits, patients who suffer from severe foot pain, numbness, or other foot complaints may remain hesitant about exercising. Although previous guidelines advised against weight-bearing physical activity to reduce the risk of ulceration, moderate walking does not increase this risk.7,19Patients without acute ulcers can safely partake in moderate-intensity exercise and should abstain from weight-bearing physical activity only if a foot injury or open sore is present.7

In a recent study, patients who followed a 10-week program of aerobic and resistance exercise experienced significant decreases in pain and neuropathic symptoms and increases in cutaneous innervation; these results demonstrate that exercise can solve the very problems that may keep patients from exercising in the first place.12 Furthermore, researchers sought to evaluate the risk of ulceration by measuring peak plantar pressures in the foot during exercise and found that most weight-bearing exercises do not exert significantly higher pressure on the feet than level walking and thus are safe to perform.20Non–weight-bearing exercises, such as stationary cycling and seated plantar flexion, exert less pressure on the feet and are also safe alternatives. Non–weight-bearing exercises may be especially helpful for patients with open foot sores or those unable to tolerate their own weight.

Concerns about poor balance and falls with exercise can also be ameliorated by data showing that exercise improves balance and reduces the risk of falls.13-15 Address patient fears on an individual basis and tailor exercise interventions accordingly to promote comfort and compliance. In accordance with guidelines,7 patients should seek instruction and supervision from a fitness professional when beginning an exercise program; this ensures safety and may assuage fears. Finally, review routine foot care with patients at each visit and advise them to inspect their feet regularly to detect ulcers, especially after beginning an exercise program.

To assist clinicians with exercise prescription, guidelines have been established by the American College of Sports Medicine and the American Diabetes Association that apply generally to patients with diabetes (Table 2).7 These guidelines are also applicable to patients who have neuropathy. 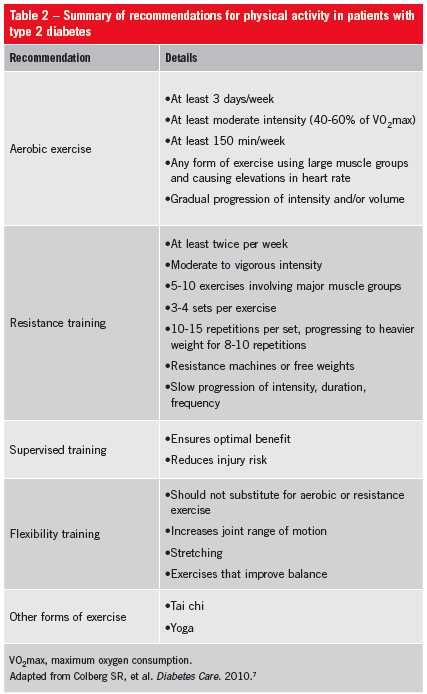 Aerobic exercise should be performed at least 3 days per week at a moderate to vigorous intensity corresponding to 40% to 60% of maximum oxygen consumption; in most patients, brisk walking is adequate. Because exercise intensity is more highly correlated with blood glucose control than exercise volume, intensity should be emphasized when constructing an exercise program.7 Aerobic exercise should be performed for at least 150 minutes spread throughout the week in bouts no shorter than 10 minutes at a time. Any form of aerobic exercise that involves large muscle groups and causes elevation in heart rate is recommended.

Resistance training should accompany aerobic training and should be performed at least 2 days per week at a moderate to vigorous intensity. A minimum of 5 to 10 exercises targeting major muscle groups should be performed in each session, with 3 or 4 sets of 10 to 15 repetitions performed per exercise.7 Patients should work to progress to heavier weights over time.

Patients should also seek instruction and supervision by a qualified professional when beginning an exercise program. This is particularly important for patients with diabetic neuropathy, because they are at risk for falls. Flexibility training and other modes of exercise that promote balance training, such as yoga or tai chi, should also be undertaken to help reduce the risk of falls; however, this should not replace aerobic or resistance exercise but rather be done in conjunction with them.7 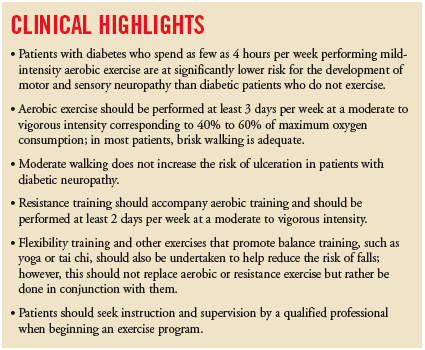