ABSTRACT: Ewing sarcoma is a rare and aggressive childhood cancer that generally is diagnosed in adolescents. Ewing sarcoma typically presents with pain, often of several weeks’ duration, and a palpable mass in the affected bone or soft tissue. Diagnostic tests include radiographs, computed tomography or magnetic resonance imaging, and biopsy. Treatment can include chemotherapy, radiation therapy, and surgery. While the prognosis has improved over time, further studies are needed to improve long-term survival, particularly of persons with metastatic disease.

An 18-year-old young woman presented to an oncologic orthopedist after having been referred by her primary care practitioner for a 9-month history of right shoulder pain. She described the pain as intermittent and worse with exertion initially, but she said it steadily had become more consistent. Approximately 2 months previously, she had noticed a lump on her right posterior shoulder that had increased in size in the weeks before her presentation. Her primary care practitioner had obtained a shoulder radiograph, which demonstrated an aggressive lytic lesion in the right scapula (Figure 1). A magnetic resonance imaging (MRI) scan 1 week later showed a large, aggressive bone lesion involving the scapula, glenoid cavity, coracoid process, and acromion process (Figure 2). Areas of cortical destruction were noted, and the mass had invaded the infraspinatus, supraspinatus, and subscapularis muscles. 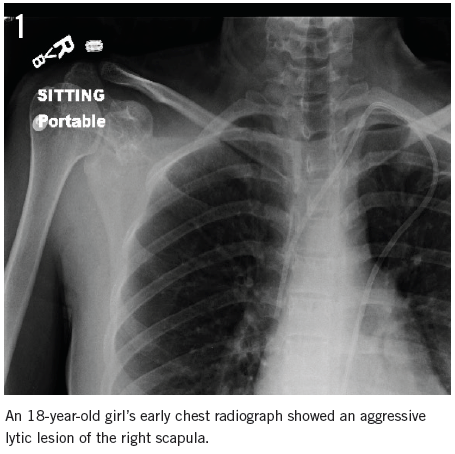 The oncologic orthopedist performed fine-needle aspiration of the tumor. Pathology test results demonstrated morphologic and molecular findings consistent with Ewing sarcoma, including the presence of the Ewing sarcoma RNA-binding protein 1 gene (EWSR1). Results of a complete metastatic workup were negative for other sites of involvement.

After having received the diagnosis of Ewing sarcoma, the patient consented to enrollment in the Children’s Oncology Group (COG) trial AEWS1031 (Combination Chemotherapy in Treating Patients with Non-Metastatic Extracranial Ewing Sarcoma) and was randomly assigned to regimen B, the experimental arm. She received neoadjuvant chemotherapy with alternating cycles of vincristine, topotecan, and cyclophosphamide; vincristine, doxorubicin, and cyclophosphamide; and ifosfamide and etoposide with intensified timing. 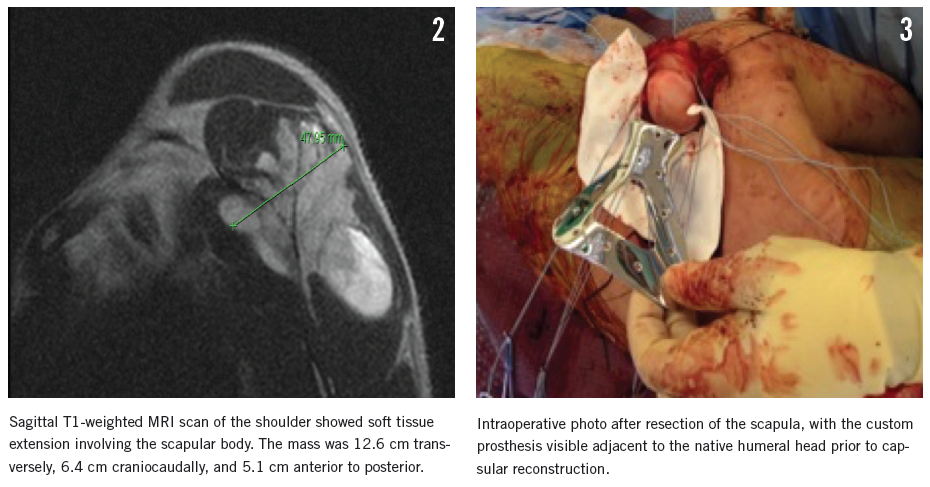 After 3 months and 6 cycles of chemotherapy, the girl underwent surgical resection of her entire scapula with scapular reconstruction and hemiarthroplasty (Figures 3 and 4). No gross tumor was encountered, and pathology results showed no residual viable tumor and negative margins. After resection, she completed 11 cycles of consolidation chemotherapy; end-of-therapy scans showed no local recurrence or distant metastases.

It has been 11 months since the patient received the Ewing sarcoma diagnosis. Her range of motion is slowly progressing during occupational therapy visits, and her follow-up radiographs have demonstrated excellent alignment of her prosthetic scapula (Figure 5). 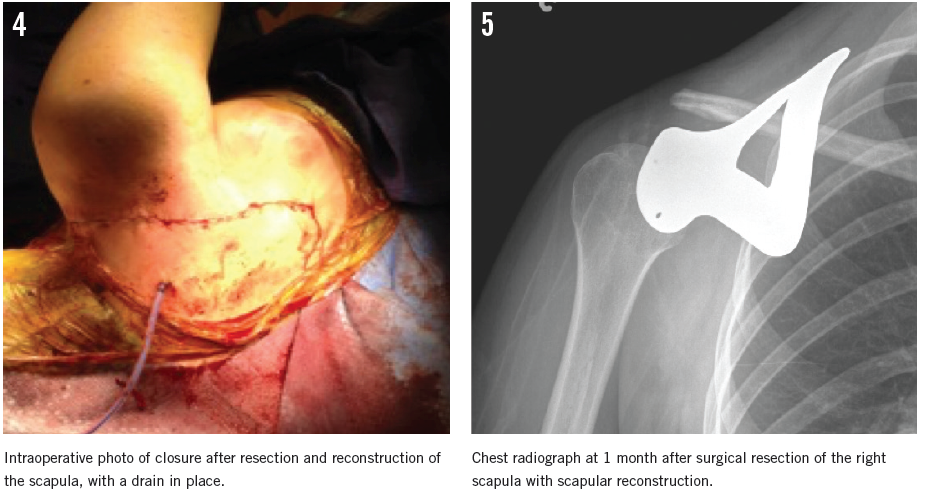 James Ewing first described the condition that now bears his name in 1921.1 Ewing sarcoma is the second most common malignant bone tumor in children, after osteosarcoma.2-4 Peak incidence is in the second decade of life, with approximately 80% of patients being younger than 20. Ewing sarcoma has a slight male predominance with a ratio of 1.6 to 1.1 Its incidence is 2.93 per million people in the white population, and it is very rare in African and Asian populations.2,4,5 The shoulder region is the third most common site for bone and soft tissue tumors, which occur frequently in the proximal humerus, scapula, and clavicle.6

While Ewing sarcoma accounts for only 3% to 10% of all bone tumors, with the flat bones of the pelvis and long bones being the most frequent site, it is an aggressive tumor that may quickly metastasize.1,5,7,8 Nearly one-fourth of patients have detectable metastases at diagnosis; the lungs are the most common site, followed by bone and bone marrow.9 The 5-year survival rate for localized Ewing sarcoma is approximately 75%, with a much worse prognosis for persons with metastatic disease.10

The Ewing sarcoma family of tumors includes Ewing sarcoma, peripheral primitive neuroectodermal tumors, Askin tumors, and neuroepitheliomas.8 Histologically, these are small, round, blue-cell tumors that appear commonly in bone and less frequently in soft tissue (approximately 25%).8,9 It is necessary to differentiate Ewing sarcoma from other small, round blue-cell tumors of childhood such as non-Hodgkin lymphoma, rhabdomyosarcoma, retinoblastoma, and neuroblastoma.2,3

The origin of Ewing sarcoma has been the subject of debate, with endothelial, mesodermal, epithelial, neural, and mesenchymal cells all having been hypothesized as the origin; the most recent research supports mesenchymal cells as the cause of tumor proliferation.8 A Ewing tumor typically consists of undifferentiated cells that often have insufficient cytoplasm, that are round or oval, that have hyperchromatic nuclei, and that test positive for glycogen.2 Ewing tumors carry a characteristic chromosomal translocation of the EWSR1 gene on chromosome 22, with the most common partner being the FLI1 gene on chromosome 11.8 Further description of the tumor can be elicited from cell-surface staining for the protein product of the CD99 gene. Although this gene may be present in normal tissue and in other tumors, the degree and level of expression are higher in Ewing tumors. The protein product reacts with the cytoplasmic membrane of the Ewing sarcoma cell, causing the honeycomb pattern sometimes referred to as the Ewing stain.2

The most common presenting symptoms are tumor-related, including localized pain and a mass in the area of tumor involvement. It is easy to misdiagnose this pain as that of an overuse injury in an active child, particularly before a mass is palpable, and this can delay the diagnosis.8,9 Our patient had pain several weeks before the diagnosis, and further workup was not initiated until a mass was noted.

A 2001 review of 93 Ewing sarcoma cases over 37 years found that approximately 5% of patients presented with a pathologic fracture, all of which occurred in long, weight-bearing bones.11

Systemic signs and symptoms can include fever, malaise, weight loss, increased erythrocyte sedimentation rate, anemia, leukocytosis, and increased serum lactate dehydrogenase (LDH).1-3 Elevated LDH has been associated with decreased survival and may be a predictor of metastatic disease.3 Tumors involving the spine and sacrum may present with neurologic changes, including bowel or bladder function problems.3 The rapidly growing tumors can be difficult to detect in the femur, pelvis, chest wall, and spine.8

Initial diagnostic evaluations typically begin with plain radiographs of the painful area, which classically show an “onionskin” periostitis resulting from a destructive lesion on the diaphysis of long bones.1,8,12

Following plain films, an MRI scan should be performed before the bleeding and edema from a biopsy have occurred.9 For extremity tumors, the MRI should include at least one joint above and below the tumor to evaluate for skip lesions.

A complete assessment for metastatic disease should be performed, including computed tomography (CT) scans of the chest to assess for pulmonary involvement, and a whole body bone scan or a positron emission tomography (PET) scan to screen for other bony lesions. Bone marrow biopsy also is recommended to complete staging. Recent studies have shown that MRI or PET scans are preferred over CT scans for staging and diagnosis.8

It is highly recommended that the diagnostic biopsy be performed by an orthopedic surgeon with expertise and experience in the management of bone tumors, preferably the same surgeon who will perform the local control surgery; this enables expert tracking of the biopsy and can help to preserve reconstructive options.9

Results of a complete blood count and laboratory tests may reveal anemia, leukocytosis, and a moderate increase in inflammatory markers, which make it necessary to rule out infectious causes of symptoms such as osteomyelitis.

Because of the aggressive nature of the Ewing sarcoma family of tumors, a multidisciplinary approach to treatment is necessary, including a multidrug chemotherapy regimen, and local control consisting of surgery, radiation, or a combination of the two.8 When adequate tissue margins can be obtained, complete surgical resection is the local control option of choice, since it is associated with a lower risk of recurrence and avoids the risks associated with radiation therapy.2,13

There are several options for surgical resection, including limb salvage, amputation, and rotationplasty. In most cases, a limb salvage procedure for resection is preferred over amputation; when performed by an experienced surgeon, no significant difference exists in survival rates, and the patient is able to keep the affected limb. For patients with tumors involving the axial skeleton or those with large tumors, primary radiation can be considered for local control.8

In the United States, chemotherapy for Ewing sarcoma consists of a multidrug regimen that includes alternating courses of ifosfamide and etoposide (IE), and vincristine, doxorubicin, and cyclophosphamide (VDC). A recent study from the COG evaluated the role of intensified timing of this regimen and confirmed that alternating VDC and IE every 2 weeks is the most effective cycle and is the current standard of care in North America.9

Our patient was enrolled in a COG study, AEWS1031, and was randomly assigned to the investigational arm, receiving the VDC and IE regimen, plus topotecan. For local control, she underwent shoulder reconstruction, which has been reported to provide better functional and cosmetic outcomes compared with amputation. Reconstruction preserves hand, wrist, and elbow function and provides partial abduction and external rotation while improving cosmesis.14

A 2007 study examined the functional and oncologic results in 25 patients following scapulectomy for various tumors.6 Patients’ progress was followed for an average of 66.7 months after surgery, and although all patients had a loss of contour of the shoulder from cosmetic perspective, they retained normal hand and wrist function. Restriction of shoulder abduction was the major functional limitation. Nineteen of the patients were disease-free at the time of their last follow-up. Importantly, patients reported being functionally and emotionally satisfied with the results of their procedures, and they learned to compensate for the reduced abduction with their other arm.6

Tumor size and stage are important prognostic factors for overall survival. A review of 46 patients treated from 1981 to 2009 found that the 5-year survival for Ewing sarcoma ranged from 57% to 77%.13 Axial and pelvic primary tumors have the lowest survival rate of 18% to 51%, while survival rates for localized extremity tumors have increased to 73% to 84%.13 Patients with metastases outside the lungs at diagnosis seldom survive.

Survival after relapse is poor, with only approximately 10% of patients surviving long-term.9 A 2010 study examining the survival rates of Ewing sarcoma found that 75% of patients who were alive without recurrence 5 years after diagnosis also were living 25 years after diagnosis.10 In this study, 60% of deaths were attributable to recurrence or progression of the primary disease; however, 40% were attributed to secondary malignancies and cardiac disease related to treatment. Infertility was found to be common among both male and female survivors, and women were 35% less likely than their siblings to become pregnant. The authors noted that despite chronic health problems, functional disparities, and secondary malignancies, Ewing sarcoma survivors had good mental health, demonstrating a remarkable ability to cope.10

While advances in chemotherapy and surgery have improved Ewing sarcoma survival rates, further investigation into the biology and management of this aggressive tumor is necessary to continue to improve survival, particularly for persons with metastatic or recurrent disease. Further studies to better understand the molecular biology of Ewing sarcoma may help in the development of targeted therapy to improve survival rates.8

Because Ewing sarcoma is such a rare disease, advances may only be possible with international trials and collaborative research. An improved understanding of Ewing sarcoma family of tumors likely will lead to enhanced diagnostic and staging technologies.9 Because of the significant risk of late effects of treatment, improved long-term follow-up care in late-effects clinics is critical for these patients. Large, randomized trials of survivors should continue to explore long-term sequelae and improve treatment of the primary tumors.10

Jennifer L. Weiner, MS, CPNP-AC/PC, is a nurse practitioner in the Department of Orthopaedics at Nationwide Children’s Hospital in Columbus, Ohio.

Pamela L. Horn, MS, CNP, RNFA, ONP-C, is a nurse practitioner in the Department of Orthopaedics at Nationwide Children’s Hospital in Columbus, Ohio.

Nicholas D. Yeager, MD, is a physician in the Division of Pediatric Hematology and Oncology at Nationwide Children’s Hospital in Columbus, Ohio.