A full-term male infant, born via normal spontaneous vaginal delivery, presented at 17 hours of life with bilateral purulent conjunctivitis. Findings from the initial physical examination shortly after birth, including examination of the eyes, had been unremarkable. The newborn had received all routine vaccines and medications shortly after birth, including erythromycin ophthalmic ointment. 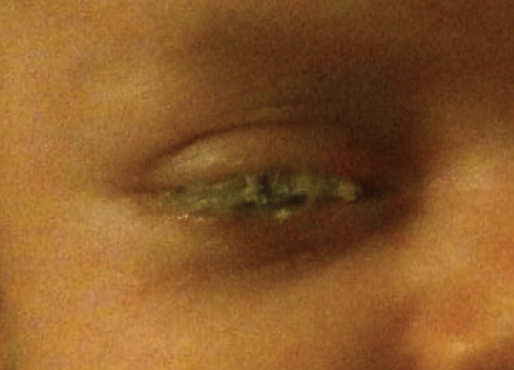 All maternal prenatal laboratory test results had been normal, including negative test results for gonorrhea and chlamydia 6 months before delivery. The mother reported that she had had only one partner during the pregnancy, and they had not used condoms during intercourse. She denied having had any vaginal discharge, pain, or pruritus during the pregnancy. The pregnancy had been notable for fetal triple test results that revealed a 1 in 200 risk for Down syndrome, and a maternal Helicobacter pylori infection that had been treated successfully without complication.

At 16 to 17 hours of life, the infant’s anterior eye examination results were remarkable for bilateral 2+ conjunctival injection, upper and lower eyelid edema and erythema, a palpebral conjunctival follicular reaction, and copious purulent discharge (greater in the right eye), raising concern for bacterial conjunctivitis secondary to gonococcal infection. Bilateral red reflexes were present. He remained afebrile with normal vital signs. The rest of the physical examination findings were normal and unchanged from the initial examination following birth. The patient was transferred from the nursery to the pediatrics floor for further care.

Eye discharge cultures and a complete sepsis workup including a complete blood count (CBC), blood culture, and cerebrospinal fluid (CSF) studies were done. CBC results revealed a white blood cell count 20,000/µL, a hemoglobin of 20.6 g/dL, a hematocrit of 61.9%, and a platelet count of 189 × 103/µL.

While awaiting culture and test results, the patient was given one dose of intravenous cefotaxime to treat a presumed gonococcal infection and was started on erythromycin ophthalmic ointment to cover for chlamydia. The patient’s eye examination results subsequently improved significantly.

Eventually the results of the sepsis workup, including CSF studies and blood cultures, proved negative. Eye discharge cultures results came back positive for Escherichia coli as the cause of the patient’s conjunctivitis. Even though the cefotaxime that initially was administered on suspicion of gonococcal infection also provides coverage for E coli, the patient instead was discharged home on a regimen of moxifloxacin ophthalmic drops four times a day in both eyes, as per the ophthalmology team’s recommendations, to ensure complete eradication of the E coli.

Prophylaxis has decreased the morbidity of ophthalmia neonatorum to very low levels in industrialized countries; however, it still is a significant cause of ocular morbidity, blindness, and even death in medically underserved countries. Its incidence is high in areas with high rates of sexually transmitted diseases, ranging from 0.1% in highly developed countries to 10% in areas such as East Africa.2 Other potential causes of ophthalmia neonatorum include infection with Staphylococcus aureus, Staphylococcus epidermidis, Streptococcus pneumoniae, Moraxella catarrhalis, and herpes simplex virus.3 Some authors have reported infection with other bacteria, including Pseudomonas species and E coli, as a cause of conjunctivitis in the newborn.4,5 Any of these organisms may be transmitted horizontally after birth or through direct contamination from contact with hospital staff or caregivers.1

N gonorrhoeae infections typically occur within 48 hours after birth.1 Infection with this organism tends to be more severe, since these bacteria have the ability to penetrate the layers of the cornea. Gonococcal ophthalmia presents clinically with diffuse eyelid edema, profound chemosis, and copious purulent discharge.

In contrast to the timeframe for N gonorrhoeae infections, chlamydial conjunctivitis occurs later in life, typically developing 5 to 14 days after birth. Infants with this infection typically present initially with unilateral or bilateral watery discharge that may progress to mucopurulent discharge. Other signs of infection with C trachomatis on eye examination include eyelid edema, papillary conjunctivitis, and pseudomembrane formation.6 The routine administration of prophylactic erythromycin ophthalmic ointment after delivery has dramatically reduced the risk of developing neonatal conjunctivitis caused by N gonorrhoeae and C trachomatis.7,8 However, this antibiotic regimen does not provide coverage for other less common causes of conjunctivitis in the newborn.