A 41-year-old construction worker from Honduras presented to his family physician with a 1-month history of hyperpigmentation on his face and neck, associated with mild pruritus. He denied a previous history of a similar eruption or preceding erythema, he had no significant past medical history, or medication use prior to the onset of this eruption. He was otherwise asymptomatic.

Physical examination revealed multiple hyperpigmented, well defined, irregularly shaped, brown-gray macules and patches on the man’s lateral neck and upper extremities, including sun-exposed and non–sun-exposed areas. No involvement of the oral mucosa or nails was noted. 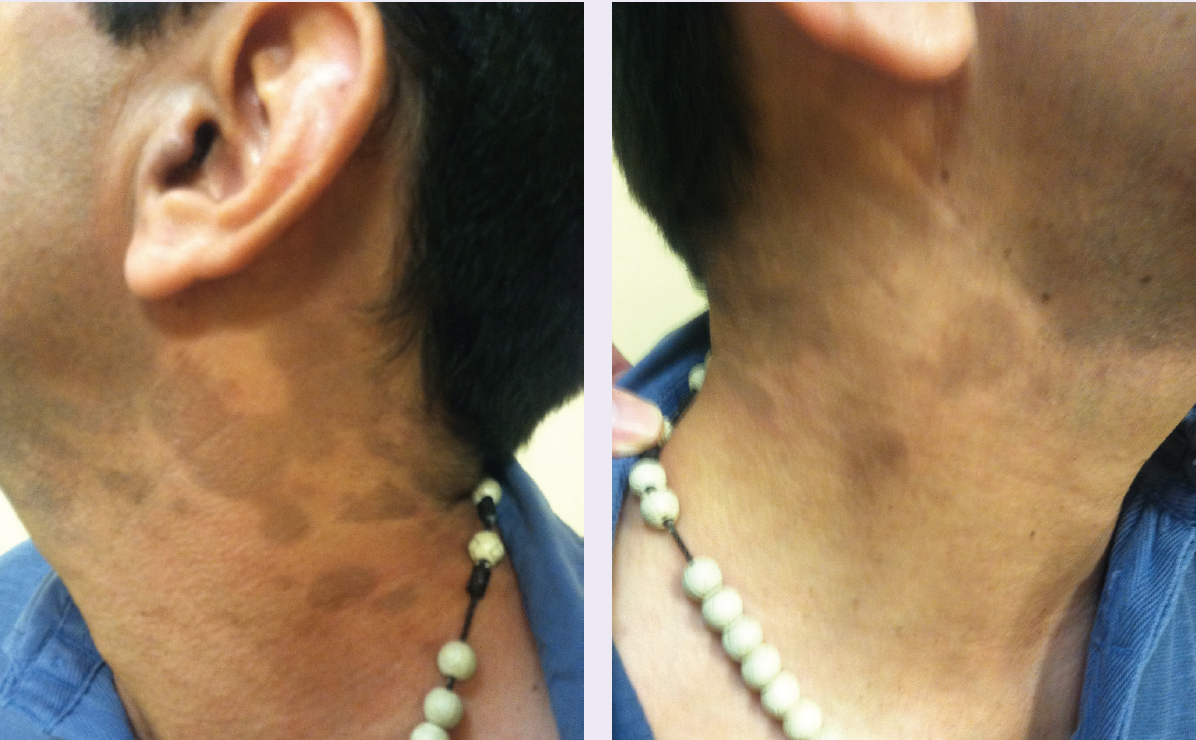 Initial empiric treatment with clotrimazole cream, 1%, did not result in improvement. Subsequent therapy with topical corticosteroids and hydroquinone, 4%, failed to improve the eruption. Results of laboratory studies, including a complete blood cell count, iron studies, and a hemoglobin A1C level, were unremarkable. A 3-mm punch biopsy was performed and revealed papillary dermal perivascular lymphocytic infiltrate with melanophages. No active lichenoid infiltrate or spores or hyphae were identified in the stratum corneum. Histologic findings were consistent with postinflammatory hyperpigmentation.

Epidemiology and pathophysiology. EDP is a rare, idiopathic, chronic, benign skin condition that is observed more commonly in persons with darker Fitzpatrick skin phototypes, specifically persons from Latin America and Asia. It has no age or sex predilection and also has been reported in white patients. First described in El Salvador in 1957, patients initially were labeled los cenicientos, or “ashy ones.” Mild pruritus is a common feature, although many patients with the condition are asymptomatic.1-4

Differential diagnosis. EDP can be easily confused with tinea versicolor, which should respond well to topical antifungal treatment. Melasma is a common acquired hyperpigmentation disorder that occurs exclusively on sun-exposed areas, mostly on the face and occasionally on the neck and forearms. Systemic causes of hyperpigmentation, such as Addison disease, insulin resistance, and hemochromatosis can be easily ruled out with a thorough history and physical examination and focused laboratory testing.

An additional differential diagnosis is postinflammatory hyperpigmentation from a prior eruption.1-3

EDP can be difficult to distinguish from lichen planus pigmentosus (LPP), to which it is closely linked, and debate continues about the specific classification of these conditions.5-8 LPP is characterized by hyperpigmented, dark brown macules that often appear in exposed areas and flexural folds. Its course is characterized by exacerbations and remissions, occasionally accompanied by pruritus. LPP may have other cutaneous lesions typical of lichen planus and may involve mucosal surfaces, whereas EDP does not.1,5

Diagnosis. The diagnosis is based on the combined clinical and histopathologic features. Patients with EDP typically present with subacute or chronic, asymptomatic, symmetric, gray-blue macules that tend to involve the proximal extremities and the trunk without relation to sun exposure. It is important to note that the oral mucosa, hands, feet, and scalp are spared.1-3,5

Histology of active and early lesions, if sampled at the peripheral border, may demonstrate vacuolar degeneration of the basal cell layer, dermal perivascular mononuclear cell infiltrate, and increased epidermal melanin and dermal melanophages. Dermal melanophages and hemosiderin may be seen in isolation if active inflammation is not present.1-5

Treatment. There is no consistently effective treatment. The use of various therapies, including topical and systemic corticosteroids, ultraviolet light, antimalarial agents, antibiotics, griseofulvin, isoniazid, and dapsone, has been reported without clear evidence of benefit.1-5,9 Some limited data from very small studies suggest benefit from treatment with clofazimine.10

Outcome of the case. The patient was informed about the benign and typically chronic nature of this condition and the lack of treatment options. To date, his condition has neither progressed nor resolved.