Episodes of Abdominal Pain in a Young Boy: What’s the Cause?

A 35-month-old boy presented to the emergency department (ED) with a chief concern of intermittent abdominal pain, which he had had for approximately 2 months. The patient’s mother stated that the boy’s episodes of pain lasted for only a few minutes and sometimes awoke him from sleep. The mother denied fever, vomiting, or other complaints. 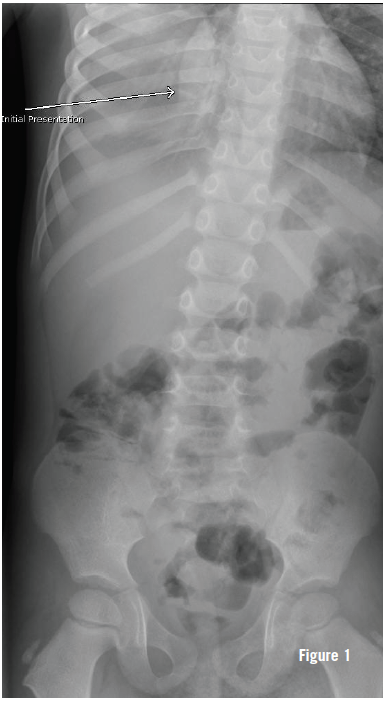 The boy had been born vaginally at term without complications. He had no significant past medical history, and at the time he had never had surgery. Physical examination findings were unremarkable. Vital signs were as follows: blood pressure, 98/66 mm Hg; pulse, 102 beats per minute; respiratory rate, 20 breaths per minute; oxygen saturation, 99% on room air; and temperature, 37.2°C. A quick reading of the single abdominal flat plate radiograph taken at the time showed constipation and gas. The patient was discharged home on an over-the-counter polyethylene glycol laxative, ½ capful (8.5 g) of powder per day, reconstituted in water, as needed. The report of the radiologist’s interpretation of the film was not seen in the emergency department before the patient’s discharge.

Over the next 3 weeks, the boy continued to have painful episodes and eventually developed a high fever. His mother had noted that her son had been crying more and sleeping less than normal during that time, and he appeared to have been breathing faster than normal and had developed a mild cough.

The patient was seen 23 days after the initial ED visit by his primary care physician, who noted minimal retractions, tachypnea (respiratory rate of 48 breaths per minute), and an oxygen saturation of 95% on room air. Results of in-office chest radiography (Figure 1) led to the patient being admitted immediately to a nearby emergency department.

How do you read this image?

The chest radiograph (Figures 1-3) showed opacification of the right hemithorax, with aeration of the right upper and anterior right lower lung, and a slight mediastinal shift to the left. At this time, the patient was directly admitted.

On physical examination at admission, his temperature was 37.6°C, pulse was 114 beats per minute, respiratory rate was 28 breaths per minute, oxygen saturation was 97% on room air, and blood pressure was 100/68 mm Hg. Lung examination showed good air entry over the left fields, which were clear; but breath sounds were significantly decreased in the right lung fields, which were relatively dull to percussion. 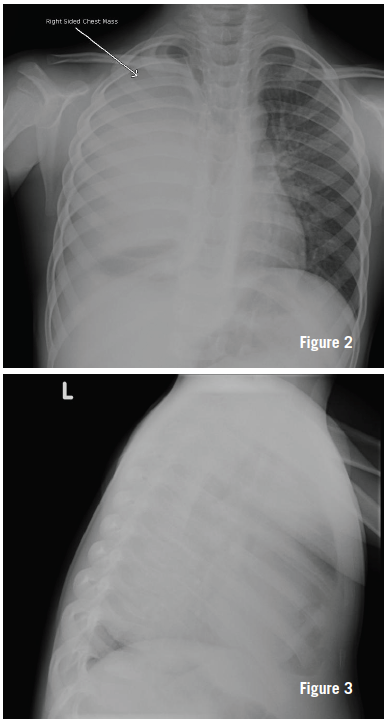 The patient was started on a regimen of cefuroxime, 150 mg/kg/day, divided every 8 hours, for empiric treatment of pneumonia; however, neoplasm was considered to be a strong possibility given the absence of an elevated WBC count and a serum osmolality suggestive of syndrome of inappropriate antidiuretic hormone secretion.

Computed tomography (CT) scans taken the next day showed a right pleural-based mass measuring 10.4 × 8.0 × 12.2 cm (Figure 4). The right lung showed significant lung volume loss and compression. No bony invasion or adenopathy was noted. There was a slight mediastinal shift. At this time, CT-guided biopsy was performed, the results of which later demonstrated spindle cell neoplasia but were insufficient for a definitive diagnosis. Core biopsy then was performed, the results of which demonstrated morphology consistent with type III pleuropulmonary blastoma (PPB).

The patient underwent cardiac function screening for prior to chemotherapy initiation, as well as metastatic screening with CT of the abdomen and pelvis, magnetic resonance imaging (MRI) of the brain, and a bone scan. An interval size increase of the mass was noted on the abdominal CT scans, but no metastatic disease was identified. MRI scans of the brain showed suspicious lesions in the right parietal lobe and the right temporal lobe, representing either pulsation artifacts or metastases. The bone scan did not identify evidence of metastatic bone disease. The patient was discharged with plans for outpatient placement of a Hickman catheter or port catheter before initiation of chemotherapy. 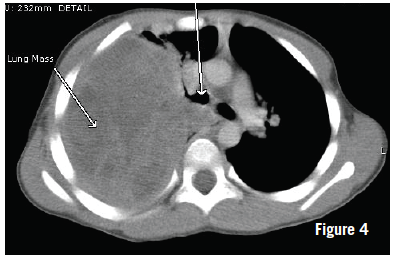 At last review, the boy had been enrolled in the International Pleuropulmonary Blastoma Registry. He had been scheduled for Hickman catheter placement and was to begin his first round of chemotherapy using the International PPB Registry’s recommended type II and III PPB protocol (vincristine, actinomycin D, doxorubicin, and ifosfamide with mesna) along with ondansetron, diphenhydramine plus metoclopramide, and/or dexamethasone as needed.

PPB is a rare and aggressive primary lung neoplasm that occurs primarily in children under the age of 5 years.1 It is a dysontogenetic neoplasm arising from the embryonic mesenchyme; it is based in the pleura, the pulmonary parenchyma, or both, hence the origin of its name.1-3

PPB is categorized into 3 different types, each representing a transition in the pathology as well as a decline in prognosis and an increase in the age of presentation.1-7 PPB is characterized by a unique series of pathologic changes, progressing from an entirely cystic neoplasm (type I) to an aggressive cystic and solid neoplasm (type II) and, eventually, an entirely solid (type III) neoplasm.1

Type I PPB is more often identified in infants, with a median age at diagnosis of 10 months and with some cases being identified in utero.1 Treatment of these neoplasms is with surgical resection along with the International PPB Registry’s recommended adjuvant chemotherapy regimen. The prognosis for type I PPB is good, with a reported 80% to 85% overall survival rate; however, this rate dramatically declines as the neoplasm begins to evolve solid components and becomes a type II or type III PPB.

Type II PPB presents later in life than type I PPB, with a median age at diagnosis of 34 months. It may present in patients who have had previous surgical cyst removal. Type III PPB has a median age at diagnosis of 44 months.1 The prognosis for patients with type II and type III PPB is 45% to 50%.6,8 The International PPB Registry recommends neoadjuvant chemotherapy, possibly along with surgical resection and radiation therapy, in the treatment of children with types II and III PPB.1,6 Common sites of metastasis include the brain, bone, lymph nodes, liver, pancreas, kidney, and adrenal glands.2,5

A patient with PPB may present with dyspnea, cough, wheezing, pleural effusion, pneumothorax, anorexia, malaise, respiratory distress, and/or abdominal pain.4,7 PPB often is found incidentally in association with a cystic mass in the lung parenchyma.

Because type I PPB is clinically and radiographically indistinguishable from a benign congenital lung cyst such as a congenital cystic adenomatoid malformation, or from congenital lobar emphysema, its initial evaluation may be misleading.1 Follow-up radiographs or CT scans may help delineate the diagnosis. To further complicate the diagnosis, even biopsy results can be misleading and yield false-negatives, since tumor cells may be localized and difficult to identify without thorough examination of the specimens.

Illnesses of the lungs are widely recognized to be associated with abdominal pain, but they are more often associated with a concurrent respiratory complaint or fever. In a clinicopathologic study of 50 PPB cases, Priest and colleagues found that 42% of patients had respiratory distress, 32% had fever, 26% had chest or abdominal pain, 26% had cough, 12% had anorexia, and 10% had malaise at the time of diagnosis.8 While the mechanism of abdominal pain in PPB is not known, it likely stems from irritation of the diaphragm created by the neoplasm. Moreover, PPB occurs predominantly in children under the age of 5 years, and an accurate description of their complaints may be limited by their inability to verbalize the presence or quality of pain and can be confounded by parents’ misinterpreted perception of the child’s symptoms.

In addition to those who present with abdominal pain, children who present with wheezing, persistent cough, hemoptysis, or recurrent pneumonia also should be considered as potentially having a lung neoplasm. Although the level of suspicion justifiably should remain low, since only 0.2% of malignant tumors in children arise from the trachea, bronchi, and lungs combined,3 it is important to keep the possibility on the list of differential diagnoses, particularly in young children. PPB and other lung neoplasms often are misdiagnosed as a respiratory tract infection, reactive airway disease, or spontaneous pneumothorax.

A personal or family history of other childhood malignancies should increase the index of suspicion for PPB in a child with suggestive symptoms, since as many as 25% of patients with PPB or their siblings have other coexisting dysplastic or neoplastic conditions.7

Abdominal pain is a common presenting symptom in the ED. As our case demonstrates, it is important to maintain a degree of suspicion of a lung condition in a child with abdominal pain and to read all radiographic images fully and carefully. PPB should be in the differential diagnosis in cases of radiographic evidence of a pulmonary mass in a small child.