As the new school year approaches, parents not only have to prepare their 4- to 6-year-old for reading, writing, and arithmetic but they must also ensure adequate vaccination of their child before the start of kindergarten. Beginning at the prenatal and newborn visits, the pediatrician paves the way for assurance that a child is ready for school from the standpoint of vaccine coverage.

As advocates and implementers of the vaccine program, pediatric caregivers are obligated to keep up-to-date with the ever-changing vaccine recommendations and requirements for the elementary school- aged child. 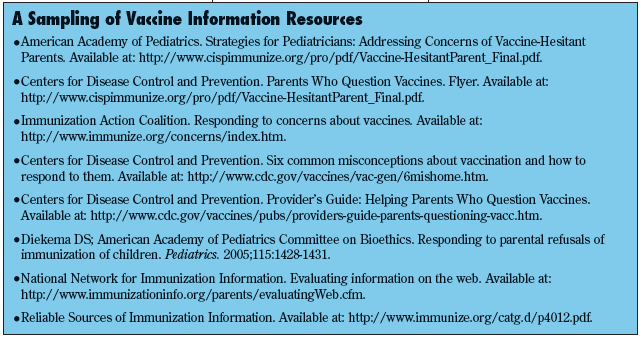 The penalty for the undervaccinated child is exclusion from entry into public school. The authority responsible for enforcing this penalty varies from state to state.2 However, the child's physician is typically the responsible party for administering and providing proof of proper immunization. Every state in the United States requires immunizations for elementary school entry, unless a child qualifies for a medical or other exemption.

The pediatrician needs to be aware of the specific contraindications for each of the vaccines in case called on to acknowledge and approve of a medical exemption.3 Forty-eight states allow for religious exemptions and 20 allow for philosophical exemptions. Major US health organizations support an aggressive vaccine schedule for all eligible children, and those vaccines required for school entry vary from state to state.

Lists of necessary vaccines for individual states are available from the state's department of health or from various Web sites, such as the National Network for Immunization Information.4 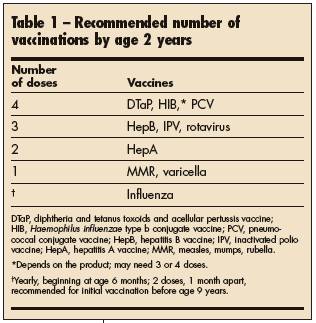 Ideally, all eligible infants and toddlers should receive all recommended immunizations (Table 1) at scheduled well visits so that when the time for entry into elementary school arrives, only 4 vaccines will be needed (Table 2). At the pre-kindergarten visit, the otherwise healthy child who has received all recommended vaccines in the first 2 years of life will need:

The last 2 vaccines can be given as the combination vaccine MMRV (ProQuad, manufactured by Merck & Co, Inc) if it is available after the current shortage is resolved.

The requirements for the second doses of varicella vaccine and MMR are relatively new. 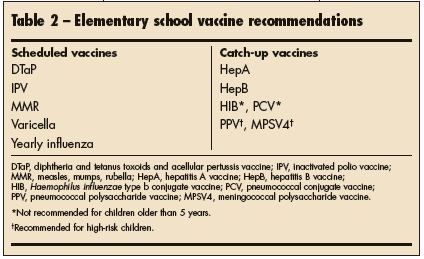 The recommendation for a second MMR dose given at least 1 month after the first came about as a response to outbreaks of measles that continued to occur among unvaccinated preschool-aged children and vaccinated adolescents.8 In 1998, the CDC recommended that the second dose be given at ages 4 to 6 years.9

Promotion of the second dose of MMR has had a beneficial impact on disease rates. Kolasa and colleagues8 reported from 2001 data that the high second-dose measles vaccine coverage in US schoolchildren resulted in a very low incidence of measles in this population. A 2006 outbreak of more than 2500 cases of mumps in 11 states further emphasized the importance of the second dose of MMR vaccine.10

The pre-kindergarten visit is an ideal time to begin, continue, or complete the hepatitis A and B series--if this has not already been done. Not all states require the hepatitis vaccinations. For example, West Virginia currently has no requirements for hepatitis B vaccination, whereas Rhode Island requires 3 doses of this vaccine before kindergarten and grade 7.4

Although the AAP has approved recommendations for universal immunization with hepatitis A vaccine for all children aged 12 to 23 months,11 only a few states (ie, New Mexico, Texas, Alaska) require it for entry into elementary school. Since the hepatitis A vaccine was licensed in the United States in 1995, recommendations regarding who should receive it have expanded. Initially, only high-risk persons--such as those who use illicit drugs or have chronic liver disease, or men having sex with men--were targeted. Coverage was then expanded to any child older than 2 years living in areas with high hepatitis A rates.

In 2005, the hepatitis A vaccine was approved for use in children as young as 12 months, and in 2006 the CDC recommended the routine use of hepatitis A in all children aged 12 months or older.12 As is true with the hepatitis B vaccine, the hepatitis A series should not be restarted if there is a large gap between doses. Only the required number of vaccines needs to be administered to complete the series.13

Catch-up vaccinations during this time frame may also include completion of the HIB (Haemophilus influenzae type b conjugate) vaccine or PCV7 (pneumococcal conjugate vaccine), although neither is generally recommended for children older than 5 years. PPV (pneumococcal polysaccharide vaccine) and MPSV4 (meningococcal polysaccharide vaccine) should be administered to the 4- to 6-year-old high-risk child if not done previously. High-risk children include those with terminal complement deficiencies or asplenia.5 Infection with HIV also probably increases a child's risk of meningococcal and invasive pneumococcal disease. Revaccination with MPSV4 for children who remain at high risk should be considered now if first vaccinated before age 4 years and if 2 to 3 years have passed since initial vaccination. The CDC reports that antibody levels triggered by MPSV4 decline rapidly after 2 to 3 years.14

Yearly influenza vaccination is recommended for all children 6 to 59 months of age and should be promoted in older children to prevent spread of this common respiratory infection.15

Children under age 9 years who are receiving influenza vaccine for the first time would need 2 doses 4 weeks apart. Thereafter, only 1 dose is needed annually. *