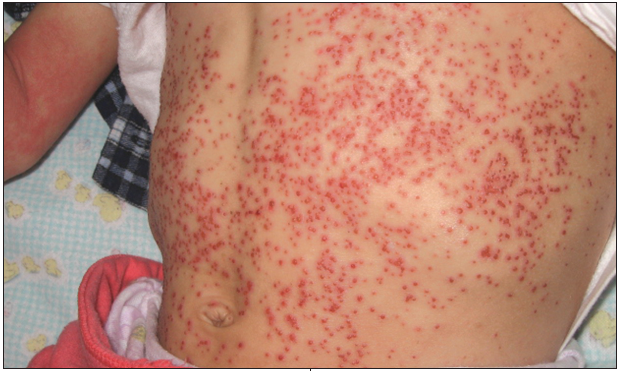 A 4-year-old girl presented with a sore throat, dysphagia, fever (temperature up to 40°C [104°F]), and a pruritic vesicular rash. On the first day of the illness, 4 days earlier, she was evaluated by her pediatrician who prescribed azithromycin( for a presumed upper respiratory tract infection. About 2 days later, a papular rash developed on the abdomen and perioral skin; the fever had persisted, and the child's oral intake had decreased. The next day, the rash continued to spread, and the patient refused to take anything orally, including fluids. The mother thought that the rash was a hypersensitivity reaction to the antibiotic.

The child's temperature was 39.1°C (102.3°F); heart rate, 120 beats per minute; respiration rate, 24 breaths per minute; and blood pressure, 110/41 mm Hg. She had deep sunken eyes, thick nasal and ear skin, and a prominent forehead. Yellowish crusting lesions were noted on the perioral skin; a diffuse vesicular rash was observed on the oral and oropharyngeal mucosa, the trunk, and lower extremities. There was mild neck lymphadenopathy. Lung, abdominal, and cardiac findings were normal. The musculoskeletal examination revealed hyperextensibility of the knee and elbow joints.

The white blood cell count was 6500/µL, with 61% neutrophils, 4% bands, 0% eosinophils, and 35% lymphocytes; hemoglobin level was 13 g/dL; and platelet count was 201 3 103/µL. A chest radiograph and liver function test results were normal. A polymerase chain reaction assay of specimens from a nasal swab was positive for herpes simplex virus (HSV) type 1. The serum IgE level measured 83,500 IU/mL on 3 separate occasions.

The child's history of poorly controlled eczema, the current presentation of eczema herpeticum and secondary impetigo caused by methicillin-sensitive Staphylococcus aureus (confirmed by culture of a perioral skin swab), the elevated IgE level, and characteristic facial features (ie, the prominent forehead, deep-set eyes, thick ears) are all consistent with hyperimmunoglobulin E (hyper-IgE) syndrome. The eczema herpeticum was believed to be the first manifestation of the disease in this patient. Other manifestations may occur later in the child's life. Distinguishing hyper-IgE syndrome from atopic dermatitis remains difficult, however, because in the latter, the IgE level in affected patients may be as high as 10,000 IU/mL.1

Hyper-IgE syndrome is a rare immunodeficiency disorder characterized by the clinical triad of recurrent staphylococcal abscesses, recurrent cyst-forming pneumonia, and an elevated serum IgE level of greater than 2000 IU/mL; eczema herpeticum has been reported with this syndrome.2 Other manifestations include osteopenia and pathological fractures (in 57% of patients),3 hyperextensible joints, scoliosis, cra-niosynostosis, and retained primary teeth. The genetic basis of this disease is still poorly understood. A trial of monoclonal anti-IgE antibody to treat this disease is currently under investigation.

Eczema herpeticum is potentially life-threatening.4 Complications include herpetic keratitis and disseminated HSV infection with visceral involvement. A high total serum IgE level and early age at onset of eczema are thought to be risk factors for eczema herpeticum.5 The first signs of the infection occur 5 to 10 days after exposure to the virus and typically appear as multiple itchy blisters and vesicles on skin previously affected by eczema. As the disease progresses, the lesions may bleed and become crusted and painful; the rash can cover the whole body. The clinical diagnosis can be confirmed by polymerase chain reaction assay, viral culture, Tzanck test, immunofluorescence tests, or serology.6 Therapy for eczema herpeticum is most effective when started early. Hospitalization is often required because of the extensive mucosal membrane involvement and the need for intravenous hydration.

This patient was treated with intravenous acyclovir (1500 mg/m2) and cefazolin (100 mg/kg) every 24 hours for 5 days. Within 3 days, her symptoms began to resolve and she was able to tolerate oral intake. She continued to take oral acyclovir (1200 mg/d) for 5 more days. At follow-up about a week later, she had almost completely recovered. The child was also given betamethasone( valerate 1%, for eczema exacerbations, and hydroxyzine( (2 mg/kg/d) to help control symptoms associated with hyper-IgE syndrome. *