As a result of rapid market growth with novel oral anticoagulants (NOACs), it can be challenging for healthcare providers to stay current with these agents. Compared to warfarin, the NOACs have significant advantages; most notably, reduced monitoring, fixed dosing, faster onset and offset, and fewer drug interactions.1 While drug interactions are less frequent with the NOACs, clinicians must be cognizant of their existence. The novelty and unfamiliarity of these agents can possibly lead to dangerous drug interactions being overlooked and subsequent patient harm. This review will highlight clinically significant drug interactions amongst the NOACs—dabigatran, rivaroxaban, and apixaban—to provide strategies for managing these interactions (Tables 1-3).

Dabigatran etexilate is a prodrug which becomes active via hydrolysis following oral absorption and is primarily renally eliminated. It is a substrate of the p-glycoprotein transport system (P-gp).2-4 Due to the involvement of P-gp, dabigatran is susceptible to drug interactions with both inhibitors and inducers of this system. In the presence of moderate or severe renal dysfunction, patients taking dabigatran are at increased risk for drug interactions and require closer examination of concomitant medications (Table 1).4,5 In addition to metabolism interactions, medications with antiplatelet and antithrombotic effects can lead to potentiation of dabigatran anticoagulation.

Following rivaroxaban administration, one-third is eliminated via the kidneys unchanged and the remaining as inactive metabolites after hepatic transformation. Hepatic metabolism occurs primarily via the cytochrome P-450 system (CYP) and includes both the 3A4 and 2J2 families of enzymes. Due to the involvement of CYP3A4, plasma concentrations of rivaroxaban can become elevated or reduced in the presence of strong inhibitors or inducers.1,6,7

In addition to CYP involvement, rivaroxaban elimination is dependent on P-gp resulting in fluctuating levels of anticoagulation when administered with medications impacting the P-gp system. Changes in plasma concentrations are most pronounced when rivaroxaban is administered with medications that affect both CYP3A4 and P-gp, which can result in increased or decreased anticoagulation depending on the interacting agent.

Due to renal excretion, patients with moderate to severe renal dysfunction are at an increased risk for significant drug interactions while taking rivaroxaban (Table 2).5,7 Lastly, there is the potential for pharmacodynamic interactions when administered with concomitant antiplatelet and antithrombotic agents. 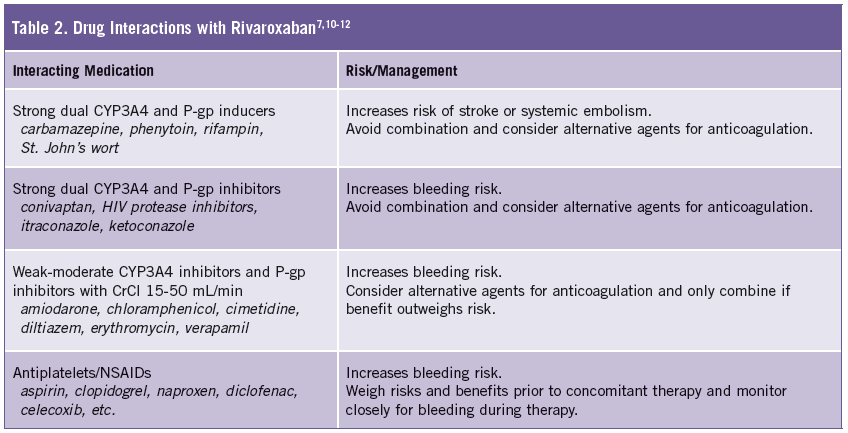 Similar to rivaroxaban, apixaban is a substrate for both CYP3A4 and P-gp—making it susceptible to numerous drug-drug interactions, particularly with agents that affect both pathways.1,8,9 Apixaban has less renal excretion than rivaroxaban, therefore moderate renal dysfunction does not significantly increase the risk of drug interactions (Table 3).8

Like the previous two agents, the use of apixaban with other medications effecting antiplatelet and antithrombotic function may lead to additive bleeding effects. ■

The author shares their thoughts on the article in an interview with Pooja Shah:

Medication
Medication
Heat-related Myocardial Infarction May be Associated With Cardiovascular Medications
Previous research has suggested that heat exposure may increase the risk of acute myocardial infarction. In this study, researchers examined the impact of certain medication usage on the relationship...
Insulin Management
Insulin Management
High Insulin Doses in People With Type 1 Diabetes Linked to Cancer Risk
A higher incidence of certain cancers has been previously reported among individuals with type 1 diabetes. In this study, researchers examined daily insulin dosages as a potential risk factor for cancer...
Viral Disease
Viral Disease
Monkeypox Declared a Global Outbreak With Defined Symptoms
Researchers aimed to establish common symptoms associated with monkeypox virus infection to assist in minimizing the spread of the infection, and bringing awareness to clinicians and the public.
Health Care Disparities
Health Care Disparities
Racial, Ethnic Disparities in ICU Oxygen Supplementation
Researchers determine the racial and ethnic differences in patients that receive supplemental oxygen in the intensive care unit.
Orthopedic Surgery
Orthopedic Surgery
Total Knee Arthroplasty Without Tourniquet Does Not Increase Risks
The researchers evaluated the postoperative clinical outcomes and complications of TKA with and without the use of a tourniquet during surgery.