Dog Bite in an Unimmunized Boy

An 11-month-old boy, with no significant past medical history other than delayed vaccinations, presented to the emergency department with a dog bite to the head. His parents reported that the family dog had become agitated for an unknown reason and had bitten the boy on the head. 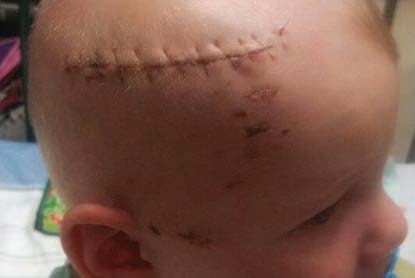 The parents reported that the boy had received his first hepatitis B vaccine at birth but had had no vaccinations since then. Considering that he had sustained a dog bite with dural compromise and had a history of delayed vaccination, the patient received the Haemophilus influenzae type b vaccine, the pneumococcal conjugate vaccine, tetanus immunoglobulin, and the combination diphtheria and tetanus toxoids and acellular pertussis (DTaP), hepatitis B, and inactivated poliovirus vaccine.

The patient continued to have intermittent fevers approximately every other day in the general pediatric unit, although final blood and urine cultures were negative for bacterial growth. Lumbar puncture was performed, and cerebrospinal fluid analysis showed a glucose level of 53 mg/dL, a protein level of 13 mg/dL, and no WBCs or red blood cells; Gram staining of CSF showed no WBCs or bacteria. Final CSF culture results were negative.

Dog bites in children usually occur when the child is less than 5 years of age, and they typically involve the head and neck.1 Bites on the head can cause serious injury to central nervous system structures.2 Most dog bite infections consist of multiple microorganisms, both aerobes and anaerobes, with Pasteurella species the leading pathogen, followed by streptococci, staphylococci, corynebacteria, and Capnocytophaga canimorsus. Fusobacterium, Bacteroides, Propionibacterium, and Peptostreptococcus species also are quite common culprits.3

In areas of the world where rabies is endemic due to a lack of dog immunization, rabies postexposure prophylaxis is necessary. In the United States, however, cases of dog-transmitted rabies are extremely rare.

Because of wound contamination from canine mouth flora, a child with dog bite wounds should receive tetanus toxoid prophylaxis if he or she does not have prior tetanus vaccination, or if the last vaccination was longer than 10 years previously. Tetanus immunoglobulin can offer immediate protection before the tetanus toxoid mounts an adequate protective antibody response.

In bites from animals with confirmed rabies infection, rabies immunoglobulin should be infiltrated around the bite sites if anatomically feasible. Deaths have occurred after improper infiltration of rabies immunoglobulin into bite sites, especially on the head and face.4 For bites with a high risk of infection because of inadequate cleansing, or bites to the face, hand, or foot, antibiotic prophylaxis must be given, although its effectiveness is not well documented.5,6 Antibiotics with broad-spectrum coverage against common canine mouth aerobes and anaerobes should be used. Many authorities prefer amoxicillin-clavulanate for outpatient therapy and ticarcillin-clavulanate for inpatient therapy of dog bite wounds.7

Pediatricians frequently face the dilemma of treating a child who has not been immunized for medical, religious or other personal reasons, or because of parents’ unfounded perceptions about the risk of vaccines. It may be difficult to persuade parents that immunizations are in the best interest of their child. Pediatricians must educate families about the risks and benefits of immunizations; with proper guidance, many families will opt to have their children immunized.

The American Academy of Pediatrics strongly encourages pediatricians to continue to care for families of unvaccinated children; liability concerns can be addressed with strong documentation of risk-and-benefit discussions with parents in the outpatient setting.8 In the acute care setting, these same principles may not apply, however. In our case, the DTaP immunization and tetanus immunoglobulin were necessary to prevent serious illness, and the decision to vaccinate the child may be viewed as acute treatment as opposed to preventive care.9 Had the family continued to refuse vaccination, it would have been reasonable to involve child protective services, since the risk of serious harm would constitute medical neglect and would outweigh the parents’ personal preference not to vaccinate.