Dog Bite in a Penicillin-Allergic Patient

The patient, a 14-year-old boy, comes to see you the same day he was bitten by a dog. In the examination room, you find him seated comfortably in the chair with his right hand and arm bandaged.

The patient had been walking with his mother near his house when a large dog ran out and jumped on him. The patient held up his right arm in defense and was knocked to the ground as the dog sunk its teeth into his arm. After a quick scuffle, the dog ran off. The patient ran home; his mother quickly wrapped his arm with gauze and called your office.

The patient and his mother are fairly certain they recognized the dog, who lives in the neighborhood. The dog has barked at them before on walks but never approached them before. The mother has not notified anyone of the event but gives you information about the dog and location of the attack.

The patient is otherwise healthy and has no significant medical history. He takes no daily medications. His mother thinks he may be allergic to penicillin. You flip through his chart and find documentation to confirm this. His last tetanus shot was 2 years ago.

The patient is afebrile. There is no evidence of other injuries, except for a large, gaping wound over his wrist. The wound is almost semicircular, and extends from halfway down the fourth and fifth metacarpals on the back of his hand to the ulnar styloid. No underlying tendons or bone are visible, and you do not see any puncture wounds.

The patient can move all of his fingers well despite some pain. You test for sensation with the blunt end of a needle along his third, fourth and fifth fingers, which the patient can feel. You press over the nails of the same fingers and his capillary refill is brisk.

WHAT WOULD YOU DO NOW?

A. Send the patient to the local emergency department for evaluation by a hand surgeon.

B. Obtain radiographs of his hand and wrist to rule out foreign body or fracture.

C. Irrigate the wound and close it primarily. Send the patient home without antibiotics.

D. Bandage the wound and send the patient home with information about the signs and symptoms of infection.

THE CONSULTANTS' CHOICE: Option B

Radiographs are indicated for patients whose hands have been bitten by an animal. The same is true for children who have been bitten on the scalp or face. If you are concerned about underlying structural injury or joint-space involvement, x-ray films may reveal occult fractures and/or foreign bodies.

In this patient's case, there is no need to involve a hand surgeon, since there is no concern about underlying tendon or bony compromise. His hand is neurovascularly intact distal to the wound. You may need to call a hand surgeon or orthopedist if an occult fracture is seen on x-ray films, however.

The radiologist calls you to report that there is no evidence of fractures or foreign bodies in the patient's radiographs. You then anesthetize the site, irrigate the wound, and debride the devitalized tissue.

WHAT WOULD YOU DO NOW?

A. Cover the wound with a dressing, send the patient home with an antibiotic prescription, and contact local public health officials about the need for rabies prophylaxis.

B. Cover the wound with a dressing, administer an initial dose of rabies vaccine, and send the patient home with an antibiotic. Schedule a follow-up for administration of additional doses of vaccine.

C. Primarily close the wound and send the patient home with antibiotics but without rabies prophylaxis.

D. Primarily close the wound and send the patient home without antibiotics or rabies prophylaxis.

THE CONSULTANTS' CHOICE: Option A

Of an estimated 4 million Americans who are bitten each year, only 500,000 seek medical attention. Most bites are inflicted by dogs and cats. Children between 5 and 14 years old are most commonly affected.

Most bites occur on the upper extremities as the patient attempts to ward off the attacking animal. Dogs typically cause gaping wounds as they pull off tissue, whereas cats tend to inflict puncture wounds. Dogs have strong jaws that can cause crush injuries to the skin and underlying structures. 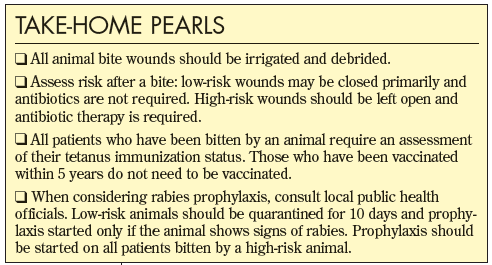 Several factors must be considered regarding the management of animal bites, including the need for rabies and tetanus prophylaxis, wound closure, and prophylactic antibiotics.

Treatment begins with an evaluation of the depth of the wound, the amount of devitalized tissue, and any signs of infection. After anesthetizing the site, obtain surgical wound edges and debride devitalized tissue. The wound should be irrigated copiously with high-pressure saline. A thorough examination is warranted, especially in children, to rule out other sites of injury.

Radiographs are indicated whenever you suspect occult fracture, retained foreign body, or injury to a joint space. A child who has sustained bite wounds to the skull and/or face also needs a radiographic evaluation.

Primary closure of bite wounds depends on the wound's location, type (eg, gaping, crushing, or puncture), time to presentation, and adequate cleansing. In general, all puncture wounds and all hand wounds should be left open, since both are associated with an increased risk of infection. Sites such as the face and scalp that have good blood supply may be closed primarily. Any wounds that are difficult to irrigate (eg, puncture wounds) or that already show signs of infection should be left open. Similarly, large lacerations, which are easy to irrigate, may be closed primarily.

The use of antibiotics is controversial. However, antibiotics should be prescribed in all high-risk situations: this includes dog bites to hands, puncture wounds, and all cat bites. Amoxicillin(/clavulanate is first-line treatment for dog, cat, and human bites. 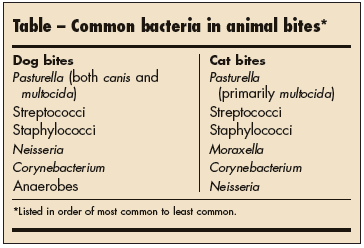 If the patient is to be followed as an outpatient, give a single dose of ampicillin(/sulbactam parenterally (1.5 g) along with a 3- to 5-day course of oral amoxicillin/clavulanate (875/125 mg bid). For penicillin-allergic adults, cefuroxime( (500 mg bid) or clindamycin (300 mg q4h) plus ciprofloxacin( (500 mg bid) is recommended. For penicillin-allergic children, cefuroxime (30 mg/kg/d divided bid) or clindamycin (8 to 25 mg/kg/d divided tid or qid) plus trimethoprim(/sulfamethoxazole (8 to 12 mg/kg/d divided bid) is recommended.

All patients with an animal bite need close follow-up within 24 to 48 hours to evaluate the site for signs of infection.

Bacteria most often associated with animal bites are listed in the Table. The most common complications of animal bites are infection and cellulitis. Patients who are asplenic and who are bitten by an animal are vulnerable to sepsis secondary to infection with the Gram-negative aerobe, Capnocytophaga canimorsus, although this is rare. Prophylaxis with penicillin is recommended in this setting.