Distal Petechiae After Tourniquet Use

A 10-month-old girl with a history of failure to thrive, hypotonia, hip dysplasia, and developmental delay was admitted to the pediatrics department with ecchymosis of the left arm after having had a tourniquet applied. 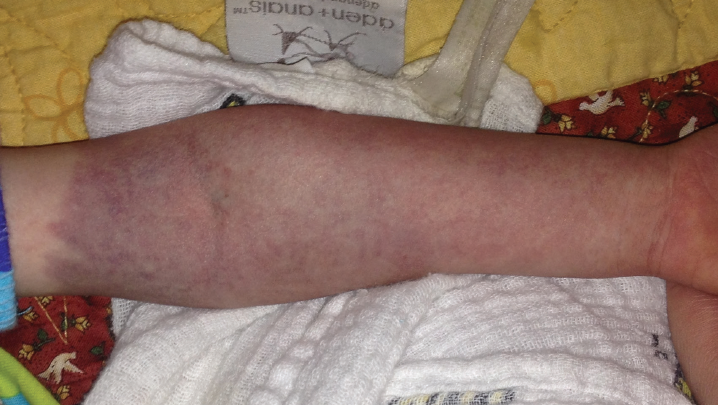 Earlier that day, the patient had been seen by a geneticist at an outpatient genetics clinic. During that visit, nursing staff had placed an appropriately sized blood pressure cuff on her left arm above the elbow, with no pain expressed by the patient. Her blood pressure was noted as being in the normal range, and the cuff was removed.

A light blue line (presumed to have been bruising) was noted at the site of the cuff after removal.

She then was sent to a laboratory for blood work, where she had a tourniquet applied at the same site. Upon removal of the tourniquet, she had developed a sharply demarcated petechial rash on the left arm, below the site of the tourniquet, extending to the hand.

What is this sign, and what does it usually indicate?

The demarcated bruising and distal petechiae seen after tourniquet use are known as the Rumpel-Leede sign or phenomenon, caused by acute dermal capillary rupture.

After the development of the petechiae in the genetics clinic and again at the laboratory, the geneticist reevaluated the patient and noted equal distal pulses and referred the patient to the emergency department for further evaluation, leading to admission for observation.

Laboratory test results demonstrated a normal prothrombin time of 9.7 seconds, a normal partial thromboplastin time of 25 seconds, and a platelet count of 247 × 103/µL. The vitamin C level also was within normal limits. 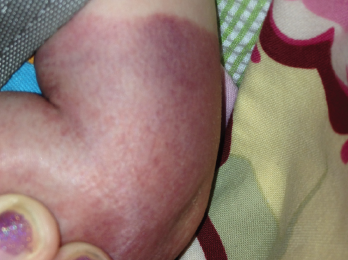 Upper extremity duplex ultrasonography showed no evidence of deep venous thrombosis. Additional laboratory test results demonstrated the presence of one copy of plasminogen activator inhibitor-1 (SERPINE-1, also called PAI-1) 4G and 5G gene alleles, as well as one copy of the variant human platelet antigen 1 (HPSE) allele, which confer an increased risk of thromboembolism. However, the patient had no thrombi during the course of her illness.

The patient’s history, physical examination findings after blood pressure cuff and tourniquet use, and laboratory test findings were consistent with a diagnosis of capillary fragility syndrome. After overnight observation, the patient was discharged home with instructions for primary care physician follow-up the next day. The petechiae resolved completely over the next 7 days.

Scant literature exists noting the Rumpel-Leede sign as an indicator of capillary fragility in the pediatric population. There have been published reports of adults developing a Rumpel-Leede sign in the presence of erythema multiforme,1 idiopathic thrombocytopenia,2 dengue fever,3 and other coagulopathies. Our patient was otherwise well and had only localized symptoms where pressure was applied externally, making a diagnosis of any of these systemic diseases unlikely.

The only noted reports of capillary leak when hematologic studies have shown normal clotting factors, platelet aggregation, and bleeding time are in patients diagnosed with Ehlers-Danlos syndrome,4 a connective tissue disorder for which our patient had not been tested previously.

Dr Campbell is a resident and Drs DeLeon and Williams are assistant clinical professors, all in the Department of Pediatrics at the University of Oklahoma Health Sciences Center in Oklahoma City.

KIRK BARBER, MD, FRCPC––Series Editor: Dr Barber is a consultant dermatologist at Alberta Children’s Hospital and clinical associate professor of medicine and community health sciences at the University of Calgary in Alberta.