Dishing Up the Right Amount of Food

Encouraging children to serve themselves as a part of family-style meals is thought to confer numerous developmental benefits, including social and motor skills and autonomy. The practice is widely endorsed by professional and government groups, including the American Academy of Pediatrics (AAP), which encourages that young children learn appropriate portion size by feeding themselves from appropriately sized plates, bowls, and cups.1 Among adults, dishware size has been shown to influence self-served portion sizes and caloric intake, but whether the same is true in children had not been examined in a naturalistic setting until DiSantis and colleagues’ recent study.2 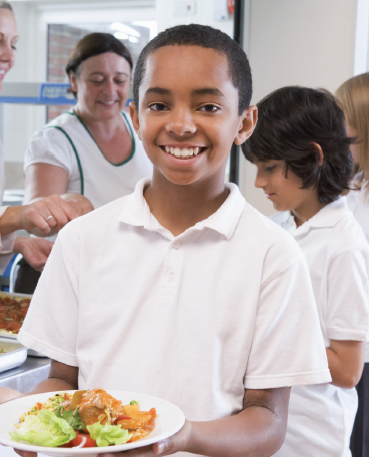 The researchers evaluated the effects of dishware size on young children’s self-served portion sizes and energy intakes at school lunch. They hypothesized that children would serve themselves larger portions and consume more energy when larger dishware was provided. Their evaluation included amorphous portions (eg, pasta) and unit portions (eg, chicken nuggets), given that the portion size of amorphous foods is more difficult to estimate. A secondary aim was to identify the characteristics of children who responded to larger dishes by serving themselves more food. They also assessed the role of characteristics known to affect children’s dietary intake and obesity risk, such as gender, weight, and household food security.

The study was conducted in 2010 in 2 first-grade classrooms at a private, urban, predominantly African American elementary school in Philadelphia, Pennsylvania. A within-subjects experimental design with randomization at the level of the classroom was used. Children served themselves using child- or adult-sized dishware, the latter of which had 100% more plate surface area or bowl volume. Two trials of each dishware type and entrée type (amorphous or unit) were held during 8 lunches.

Primary outcomes were children’s self-served portions of each food and total energy served. Energy intake at the meal was a secondary outcome. Servings were measured on a digital scale with a remote readout. After a timed 15-minute meal, weights were recorded for each food using the same scales. Energy intake was calculated based on nutritional information provided by the school’s food service vendor.

Limitations to the study included that randomization occurred at the classroom level; therefore, the effects of the classroom and the effects of dish size could not be separated. Furthermore, that the children served themselves in the experiment was a departure from their usual procedure. Although the study did not assess children’s serving behaviors at home, the within-subjects design, in which children served as their own controls, minimized the influence of this potential source of random bias. The extent to which these findings generalize children of other ages, ethnicities, and socioeconomic backgrounds requires further inquiry.

The fact that adult-sized dishware led to larger self-served lunch portions in young children provides new evidence of the influence of environmental eating cues on the appetite of children.

This study suggests that larger dishware leads to larger self-served portions, in turn leading to greater caloric intake. As such, dish size may be an important part of behavioral interventions and clinical recommendations aimed at reducing intakes of energy-dense foods and promoting healthy appetites in children.