ABSTRACT: Dilated cardiomyopathy (DCM) is a common complication of Duchenne muscular dystrophy (DMD), but it usually does not present with clinically significant symptoms until the later stages of the disease. DCM in children can present in a similar fashion to DCM in adults, including chest pain, palpitations, dyspnea, dizziness, and syncope. However, pediatric DCM can manifest atypically as pulmonary symptoms or gastrointestinal symptoms. We present a case of severe DCM in a 15-year-old boy with DMD who presented clinically with gastrointestinal symptoms.

Duchenne muscular dystrophy (DMD) is the most common inherited muscle disease affecting children.1,2 It is an X-linked recessive disorder with an incidence of 1 in 3,300 live male births.3

DMD is caused by mutations in the gene coding for the dystrophin protein on the short arm of the X chromosome at band 21 (Xp21).1 This protein is a member of the dystrophin-glycoprotein complex, an essential component of the muscle membrane that provides a link between the muscle fiber cytoskeleton and the extracellular matrix. Without the dystrophin-glycoprotein complex, muscle cells undergo stretch-induced damage and necrosis.1,4 These muscle fibers ultimately are replaced with adipose and connective tissue, causing a pseudohypertrophy and atrophy of muscles.4

An individual with DMD typically presents clinically before the age of 5 years.2,4 The first identifiable symptom most often is a delay in achieving motor milestones. Affected boys also may present with an abnormal gait, difficulty rising from the floor, and problems with stair negotiation.

After diagnosis, progressive proximal weakness ensues. Hip and shoulder girdle muscles most often are the first to be affected, with distal muscle weakness following soon after. Ambulation typically is lost between the ages of 7 and 12, although this consequence may be delayed to 10 to 15 years of age with prednisone treatment.2 Persons with DMD typically die in their teens or 20s secondary to the condition’s cardiopulmonary complications.1,2,4

The diagnosis of DMD is made using the patient’s history, clinical signs, physical examination findings, and laboratory test and imaging results. On average, a clinical diagnosis is made 2 years after clinical signs first appear.1,2 Elevated serum creatine kinase (CK) levels at birth are a key diagnostic marker; however, this marker is lost with age, since serum CK levels decrease as muscle mass is lost. Electromyography is important to establish a myopathic cause and exclude neurogenic causes of a child’s weakness.

The gold standard for diagnosing DMD is genetic testing of the dystrophin gene to determine the defect.1 Genetic analysis may reveal deletions, duplications, or sequence variations. A muscle biopsy also can be useful to show the cell morphology and can confirm the diagnosis.1

Advancements in neuromuscular and respiratory care have improved the life expectancy of patients with DMD.5 As a result, cardiac dysfunction now is an increasing cause of morbidity and mortality in the patient population with DMD. Up to 20% of all DMD-related deaths are a result of DCM.4,5 Patients with DMD and DCM often report a history of chest pain, palpitations, dyspnea, dizziness, and syncope.1,2,5 Additionally, they may present with an inferolaterally displaced point of maximal impact, jugular venous distention, a systolic ejection murmur, and S3 or S4 heart sounds. Echocardiography is the gold standard for diagnosis of DCM.5,6

Atypical presentations of cardiomyopathy also can occur in persons with DMD and at times may be the only indication of cardiac dysfunction. Atypical gastrointestinal (GI) symptoms of cardiac disease include nausea, heartburn, anorexia, abdominal pain or fullness, and weight loss.5,7

We present a case of a boy with DMD who appeared with minor, nonspecific GI complaints that revealed an underlying severe cardiomyopathy.

At the age of 4, a boy was referred for treatment after having presented to his primary care physician with concern about urine discoloration and pseudohypertrophy of the calves. At the time, laboratory tests revealed an elevation of serum CK to 46,000 IU/L (reference range, 10-120 IU/L), which prompted referral for chromosomal analysis.

Initial physical examination findings included easy fatigue, difficulty with stairs, toe walking, an inability to perform a single-leg stance, and an inability to jump. A diagnosis of DMD was confirmed by DNA deletion test.

The boy had been born at term to a gravida 4, para 3 (2 births at term, 1 premature birth, and 1 abortion) mother. He attained developmental milestones normally despite a mild speech delay.

He had been seen annually for the first 4 years after the diagnosis and every 6 months thereafter. He had had no significant medical or surgical history during the course of his illness. His chronologic history and physical examination findings were consistent with the typical presentation of DMD. Results of manual muscle testing had shown a loss of strength in a linear progression from the ages of 4 through 15 years. His upper extremity muscles were stronger than his lower extremity muscles, his proximal muscle groups were weaker than his distal muscle groups, and his extensor muscles were weaker than his flexor muscles.

By age 11, he had become unable to run and had begun falling frequently. He ceased to ambulate at age 12, at which time he began using a wheelchair. He also exhibited a mild degree of cognitive impairment, mostly with computational tasks.

Several diagnostic tests were completed over the course of his illness to evaluate defining disease characteristics. Notably, a polymerase chain reaction chromosomal deletion study was performed at age 4, revealing deletions of exons 17, 19, and 43. At age 5, he was referred to a pediatric neurologist to begin a discussion about the use of corticosteroid therapy with the goal of prolonging ambulation by delaying muscle degeneration and promoting proliferation of myogenic precursor stem cells.8 The patient and his family chose not to pursue corticosteroid therapy after a thorough discussion with the neurologist.

At age 13, pulmonary function testing with spirometry revealed normal values for forced expiratory volume in the first second of expiration (FEV1), forced vital capacity (FVC), and FEV1/FVC ratio, along with normal total lung capacity and vital capacity. At this time, the results of electrocardiography (ECG) also were normal. He had not adhered with prescriptions to obtain scoliosis radiographic series, transthoracic echocardiograms, and pulmonary and cardiology consultations.

At age 15, the boy and his parents presented for routine follow-up and a discussion about motorized mobility. He had had no specific complaints of shortness of breath, chest pain, or other cardiac symptoms. At this time, he had become wheelchair-dependent. On physical examination, he exhibited resting tachycardia (106 beats/min), with no cardiac ectopy on ECG. In addition to the expected level of weakness, he also demonstrated bilateral lower extremity edema. Before leaving after the visit, his parents mentioned in passing that he had had a 2-week history of decreased appetite, heartburn, and mild nausea when leaning forward. The nausea was relieved when he sat upright or leaned back. The parents had been treating these symptoms with over-the-counter antacids. He had had no reported weight loss.

Two weeks later, echocardiography revealed similar findings, and ECG demonstrated sinus tachycardia with premature ventricular contractions, left axis deviation, nonspecific ST and T wave changes, and normal intervals. Clinically, he had a fluctuating appetite and orthopnea requiring oxygen at night. The addition of a β-blocker to his medication regimen also was discussed, but the family elected against it because of the need for close monitoring and frequent office visits, as well as the lack of strongly proven efficacy at the time. The boy remained on hospice care while being treated at home with his family. His symptoms slowly progressed until his death 14 months later. 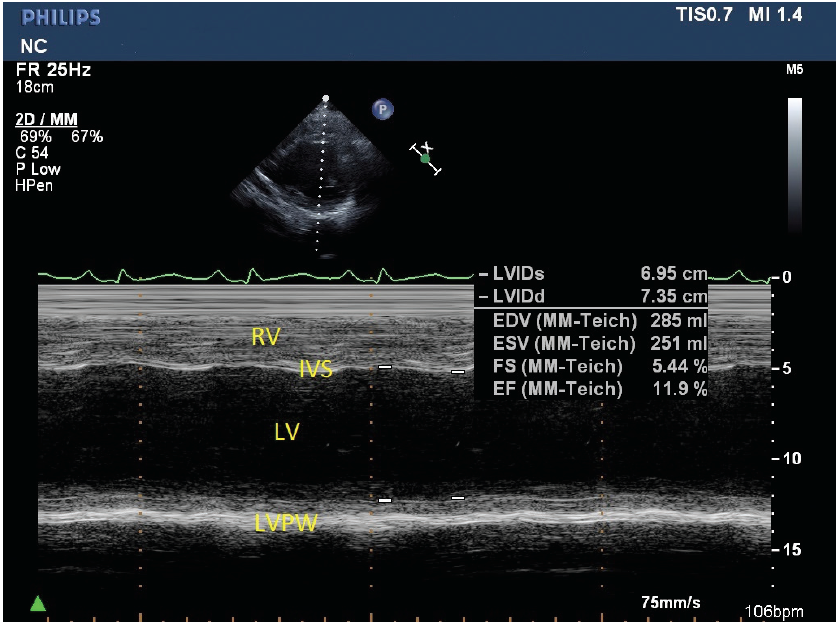 Cardiac symptoms are apparent in many of the hereditary muscular dystrophies—including DMD, in which symptoms appear in 60% to 80% of cases.1,2,9 In several dystrophies, the heart still may be seriously affected despite the absence of clinically significant weakness.1,9 Cardiac muscle involvement and cardiomyopathy severity are independent of skeletal muscle involvement in persons with DMD.5 Dystrophin is localized to the membrane surface of cardiac Purkinje fibers, likely contributing to the increased incidence of ECG and echocardiographic abnormalities in children with DMD.2 Pulmonary hypertension also has been implicated in the cardiopulmonary insufficiency that is observed in cases of DMD.9

Only 30% of DMD patients demonstrate clinically significant cardiac complications, suggesting that DMD-associated myocardial impairment may remain clinically silent until more advanced stages of disease. The late presentation of cardiomyopathy in DMD patients may be related to a lack of exercise stress being placed on the cardiac muscle. Because persons with DMD are increasingly living into their 20s and often 30s, awareness of silent cardiomyopathy is important considering that death from congestive heart failure has been estimated as occurring in up to 40% of persons with DMD.2,9

Jaffe and colleagues2 suggest that morphologic changes of visceral smooth muscles in boys with DMD are related to specific symptoms, particularly gastric hypomotility and acute gastric dilation. Their study found that symptoms of upper GI dysfunction were more prevalent in boys with DMD than in healthy age-matched controls, and that heartburn in particular occurred more frequently in nonambulatory participants than in ambulatory participants.

Patients and their family members often initiate antacid use, dietary modifications, and periprandial positioning adjustments to help alleviate these upper GI symptoms. Postmortem findings have confirmed evidence of reflux esophagitis and involvement of the pharyngeal and hypopharyngeal musculature in the dystrophic process, with smooth muscle exhibiting moderate fibrosis.2

Reports in the literature of GI presentations of DMD-related cardiomyopathy are sparse, although numerous case studies have suggested a strong relationship between these factors. In spite of this, we were able to find no case study discussing the diagnostic parameters of GI manifestations of cardiomyopathy in children with DMD.

Given the typical presentation of DMD, routine ECG and echocardiographic testing should be performed beginning at a young age, even when the person is asymptomatic and without significant muscular weakness. It is recommended that an echocardiogram be obtained every 2 years until age 10, and yearly thereafter.1

The patient described here did not receive a full GI evaluation, but his symptomatic complaint of heartburn was alleviated with pharmacologic management of his severe dilated cardiomyopathy. Research has suggested that the presymptomatic, routine administration of corticosteroids to persons with DMD may be cardioprotective by delaying the onset of and reducing the severity of cardiac involvement.10

In particular, the use of prednisone (75 mg/kg/d) has been recommended for use in individuals with DMD aged 4 to 8 years old. It has been proven to enhance muscle function, prolong time of ambulation, delay the progression of scoliosis, and stabilize pulmonary and cardiac function.2,6 Despite these benefits, prednisone treatment does carry a risk of associated adverse effects, including weight gain, osteoporosis, hyperglycemia, and mood lability, as well as effects that are specifically adverse to cardiac function such as ventricular hypertrophy, lipid abnormalities, and increased blood pressure.6

The association of GI and cardiac symptoms in patients with DMD can help lead to early screening and early detection of cardiomyopathy. A person with DMD with a complaint of heartburn or nausea may be experiencing the clinical onset of early heart failure. The case described here emphasizes the atypical presentation of a significant and life-threatening cardiomyopathy that can develop acutely in persons with DMD. Methods of detection include the clinical history, physical examination, ECG, and echocardiography.

While no cures exist for any of the muscular dystrophies, an emphasis on treatments that delay the onset of symptoms is crucial to enhancing the quality of life of persons with DMD. By closely monitoring the association between GI and cardiac symptoms in patients with DMD, future treatment plans can be targeted at diagnosing and treating cardiomyopathies before they become severely symptomatic.

Roger Rossi, DO, is a physiatrist in the Department of Physical Medicine and Rehabilitation at the JFK Johnson Rehabilitation Institute at Rutgers Robert Wood Johnson Medical School in Edison, New Jersey.

Dawn Deike, DO, is a physical medicine and rehabilitation resident at Albany Medical College in Albany, New York.