ABSTRACT: Digital clubbing is a clinical sign that is often overlooked in its earlier stages but that can serve as an indicator of serious underlying systemic disorders, including pulmonary diseases (particularly lung cancer), cardiovascular abnormalities, diseases of the liver and gastrointestinal tract, and more. This article describes the approaches to identifying and characterizing digital clubbing in the clinical setting (either alone or as a feature of hypertrophic osteoarthropathy), elucidating its pathogenesis, and recognizing its associations with systemic diseases and the significance of those associations.

Digital clubbing is characterized by a bulbous enlargement of the terminal phalanges, resulting in an increase in the anteroposterior and lateral diameter of the nails (Figure 1). The unique appearance of clubbed digits has earned them the moniker of “drumstick fingers” or “watch-glass nails.”1 Digital clubbing was first described by Hippocrates and is regarded as the oldest clinical sign in medicine.1,2 While clubbed digits are mostly asymptomatic and are not pathophysiologic in themselves, the finding of clubbing can be significant because it often is associated with various serious underlying medical conditions, most of which involve the thorax and abdomen, and thus can be an ominous sign.1,3-5 Given these associations, recognizing digital clubbing could lead to better outcomes by encouraging further investigation into a patient’s health. 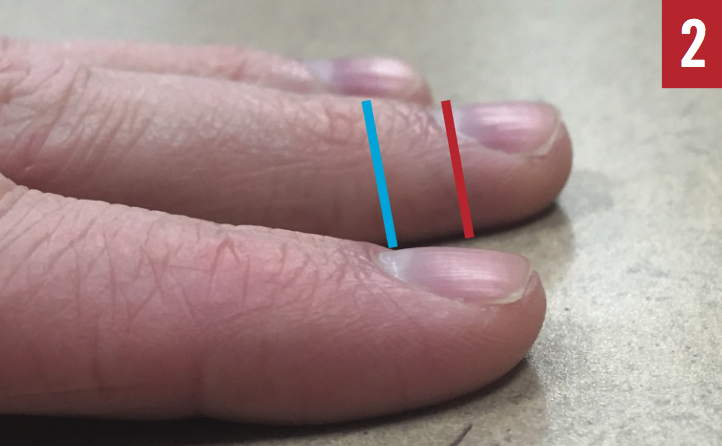 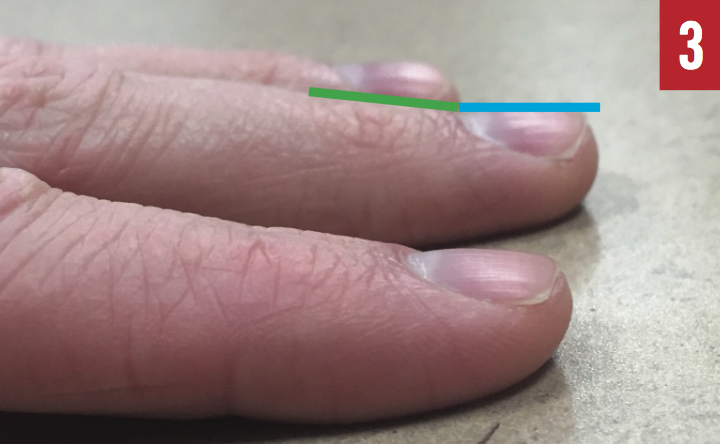 Figure 3: A normal hyponychial angle; an individual with clubbing would demonstrate an angle greater than 192°.

The Schamroth sign is a means of qualitatively assessing digital clubbing. The Schamroth sign is observed when the normally appearing diamond-shaped window that is formed by placing the dorsal surfaces of opposite terminal phalanges together disappears (Figure 4).8 In cases of diagnostic uncertainty, the phalangeal depth ratio may be the most useful test for the clinician to perform at the bedside.7

Clubbing has been demonstrated to occur in stages. The earliest recognizable manifestation of clubbing is softening and increased thickness of the nail bed, which results in a spongy sensation on palpation. The softening is followed by an increase in the hyponychial angle, and this increased angle causes the nail to develop a convexity as it grows. Eventually, the nail appears shiny, and the depth of the distal phalange increases.6 The final stage is characterized by a recognizably clubbed appearance.

The nail bed softening and thickening is a result of edema, which leads to increased vascular and connective tissue in the terminal segment, and collagen at later stages. Lymphocytic infiltrate and capillary dilation in the nail pulp also have been observed and are important in understanding the pathogenesis of the clubbing.4

Several hypotheses have been proposed to explain the pathogenesis of clubbing, the most promising of which are framed in mechanistic and biochemical categories.4

The most supported hypothesis was developed by Dickinson and Martin,9,10 who proposed that particulate matter is the cause of clubbing. This hypothesis stems from the idea that most platelets are produced in the lungs. Megakaryocytes are produced in the bone marrow and are abundant in mixed venous blood but are scarce in arterial blood. Platelets, conversely, are more abundant in arterial blood than in venous blood. These observations led to the proposal that platelets are created in pulmonary capillaries by the physical fragmentation of megakaryocytes.10 The large size of megakaryocytes would not allow the cells to pass through narrow pulmonary capillaries unchanged. A change in pulmonary vasculature, such as a right-to-left shunt, would allow megakaryocytes to pass into the systemic circulation unfragmented. Large particles tend to travel in an axial stream and preferentially land in the tips of the fingers and toes.10 Once stuck in the smaller capillaries, megakaryocytes can secrete platelet-derived growth factor (PDGF), which produces numerous effects—it acts as a growth factor, increases vascular permeability, has a chemotactic effect on monocytes and neutrophils, and is an attractor for smooth-muscle cells and fibroblasts. Thus, concentrations of platelet clumps or megakaryocytes at the fingertips could release locally high concentrations of PDGF, the effects of which could account for most of the pathologic changes observed in clubbing, such as the increased thickness of the nail bed and pulp, the increased amount of vascular connective tissue, and cellular infiltration of pulp tissue.10

The biochemical hypotheses about the pathogenesis of clubbing suggest that other factors, such as vascular endothelial growth factor (VEGF), help facilitate clubbing.2 VEGF is a platelet-derived factor that is induced by hypoxia; thus, peripheral activation of platelets may lead to clubbing.2,4 Studies have demonstrated an increase in levels of VEGF, PDGF, and hypoxia-induced factors in patients with clubbed digits compared with patients without clubbing.11

Understanding the pathogenesis of digital clubbing may help explain its many associations with other diseases. Factors such as local hypoxia, platelet activation, and release of proteins such as VEGF most likely play a contributory role in the pathogenesis of clubbing.3

HOA may present as a primary condition known as pachydermoperiostosis or secondary to a variety of disease processes.6 Primary HOA is an autosomal dominant disorder that presents as clubbing, periostosis, dermatologic manifestations such as thickened skin on the face and scalp, and overproduction of prostaglandin E2.6,11 Primary HOA represents approximately 5% of HOA cases, while the other 95% of cases are related to secondary causes.13 Therefore, it is imperative to differentiate the more common secondary HOA from primary HOA in order to adequately address the underlying disease associated with secondary HOA.14 Studies have reported the clinical importance of HOA as an indicator of malignant disease.15 Secondary HOA should always warrant investigation, since 90% of persons who express the full triad of symptoms have or will develop a malignancy, and more than 80% of adult HOA cases currently have malignancies.4,16

Several clinical reports have noted that a new diagnosis of HOA or the presence of signs of HOA warrants a search for a potential malignancy; if clubbing is observed in the absence of overt pathology, a screening computed tomography scan of the chest may be warranted.3,16

The medical conditions associated with digital clubbing include pulmonary diseases (75%-80% of cases), cardiovascular abnormalities (10%-15% of cases), diseases of the gastrointestinal tract and liver (5%-15% of cases), and other miscellaneous disorders (5%-15% of cases).13 The likelihood ratio of clubbing has been determined for lung cancer (3.9) and for inflammatory bowel disease (2.8 for Crohn disease and 3.7 for ulcerative colitis).7 The appearance of clubbing is generally a poor prognostic sign, meaning that the underlying illness has reached an advanced stage.2

Lung diseases are most commonly associated with clubbing, with clubbing being the most common paraneoplastic manifestation in patients with lung cancer.1 The combination of digital clubbing and a mass detected on chest radiographs is a common presentation in cases of lung cancer.15 Patients with lung cancer who demonstrate clubbing generally have significantly higher levels of VEGF compared with patients who present with lung cancer without clubbing.3,17 This finding supports the biochemical hypothesis of clubbing pathogenesis, where the potential mechanism of clubbing in lung cancer can be from excess lung VEGF gaining access to the systemic circulation.2,16 It has also been speculated that tumors may provide their own right-to-left shunts within the lung, allowing megakaryocytes to pass into the systemic circulation, further driving the development of clubbing though mechanistic pathways.10

Despite that digital clubbing is more associated with lung cancer than any other condition, only 5% to 15% of people with lung cancer demonstrate clubbing.1 Squamous cell carcinoma and adenocarcinoma are the most common cancers associated with clubbing.16 Successful treatment with tumor resection, radiotherapy, and/or chemotherapy has been demonstrated to abolish clubbing.3,10,17,18

Interstitial lung diseases also are frequently associated with digital clubbing, with idiopathic pulmonary fibrosis the most common cause of clubbing among them.1 Other diseases of the lung that may be associated with clubbing include bronchiectasis, lung abscess, fibrous pleural tumors, and mesothelioma.

While the lung serves the most common nidus for the formation of clubbing, dysfunction in other organ systems can produce similar phenotypes. Cyanotic heart disease, infective endocarditis, inflammatory bowel diseases, and hepatobiliary diseases have also been associated with clubbing.1,8 Clubbing associated with the cardiovascular system has been classically associated with cyanotic heart disease and right-to-left shunts.1,10,19 Clubbing with cyanosis is found in certain congenital cardiovascular defects, while clubbing without cyanosis is found in subacute endocarditis.3

The association of clubbing with inflammatory gastrointestinal tract diseases has been described, and it is more commonly noted in Crohn disease than in ulcerative colitis.1 Clubbing is more prevalent during the active bowel inflammatory disease stage. This observation is supported by the higher production of VEGF by mucosa with active disease than by unaffected mucosa.3 Megakaryocytes may also play a significant role in the pathogenesis of clubbing in inflammatory bowel disease due to increased sensitivity of platelets to activation, which could result in increased release of PDGF and subsequently higher concentration of it in the distal phalanges.1

Other inflammatory diseases less commonly have demonstrated an association with clubbing. Chronic infections associated with cystic fibrosis, as well as tuberculosis, subacute bacterial endocarditis, and syphilis are also associated with HOA.16 It could be reasonable to assume that the inflammatory conditions posed by chronic infections lead to vasodilation and a predisposition of platelets to aggregate and release PDGF in the inflamed areas.10

Shailendra K. Saxena, MD, PhD, is a professor in the Department of Family Medicine at Creighton University Medical Center in Omaha, Nebraska.