Did going on vacation cause this intensely pruritic rash?

CASE: This rash developed on the forearms and upper chest of a 13-year-old girl on the second day of a winter vacation in Hawaii. The patient lived in Canada, and this was her first tropical vacation. 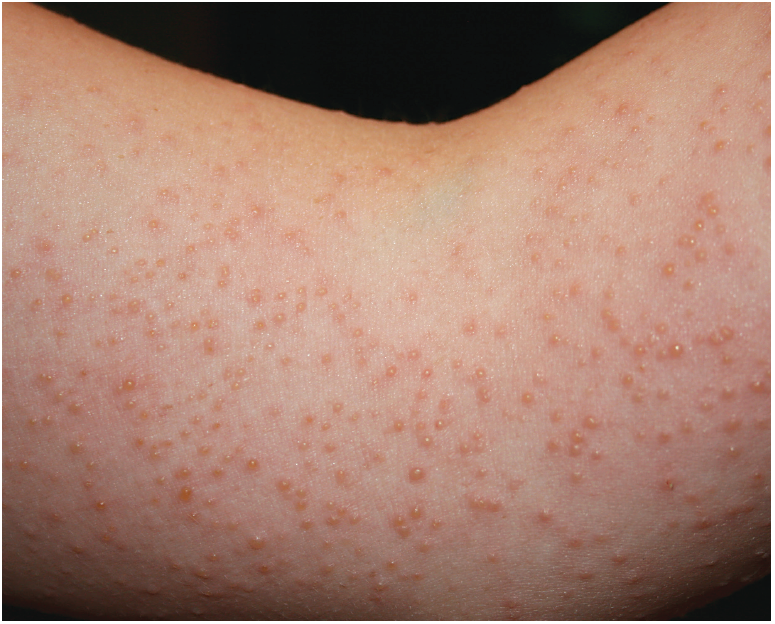 She had headed excitedly for the beach shortly after she arrived; however, in the early morning hours of her second day in Hawaii, she was awakened by the intensely itchy, blistering reaction shown here. The rash persisted for the remainder of the weeklong vacation despite sun avoidance. Her forearms and upper chest were the only parts of her body involved, even though other areas had also been exposed to the sun.

What advice would you give this girl’s parents for their daughter’s next tropical vacation?

ANSWER:
Use a good broad-spectrum sunscreen, and pack a potent topical corticosteroid and a short course of prednisone.

This patient experienced a delayed abnormal response to ultraviolet (UV) light known as polymorphic light eruption (PMLE). PMLE is the most common abnormal reaction to UV light. It classically presents as a papular or papulovesicular eruption on the arms and anterior chest with sparing of the face. One of the morphological hallmarks of PMLE is the severe involvement of some parts of the body with paradoxical sparing of other similarly exposed areas. PMLE is more common in females than in males; the average age at onset is the early 20s. PMLE can affect persons of all races but is more common in those who are fair-skinned. 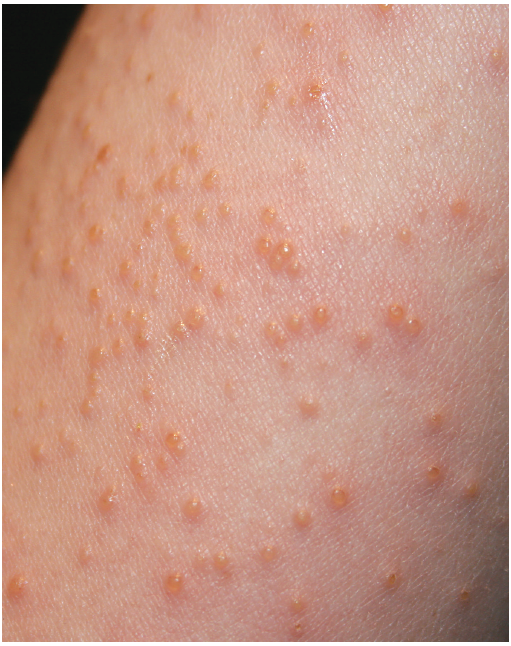 Clinical characteristics of PMLE. The reaction of PMLE usually begins 12 to 24 hours after an initial exposure to light of a suddenly increased intensity; it may be preceded by tingling or itching of the skin. The rash persists for 7 to 10 days and resolves without scarring. The rash may recur with subsequent intense UV light exposure. Each patient seems to have a unique “intensity threshold” at which the reaction is triggered. PMLE is a chronic condition, but after a number of years many patients experience a remission or a change in the threshold at which the reaction occurs.

This girl’s presentation is quite typical. If she were to have another similarly intense exposure to UV light, I would expect her to have a recurrence of the rash. She may not experience PMLE during the summer months at home since the UV light in the northern latitudes where she lives is probably not of sufficient intensity to provoke the reaction. If the rash of PMLE develops in a patient in the spring, it is likely to become less prominent and develop less frequently with repeated light exposure over the course of the summer. This phenomenon is known as “hardening.”

Treatment. Once the reaction has occurred, I initially prescribe potent topical corticosteroids and oral antihistamines. If these agents do not relieve the patient’s symptoms, I believe that systemic corticosteroids are the best choice. Systemic therapy with ß-carotene and antimalarials (eg, hydroxychloroquine) may be tried, but in my experience these medications are rarely helpful.

Prevention. Both UV-A and UV-B wavelengths have been implicated in initiating PMLE; thus, it is essential that susceptible patients use sunscreens with good UV-A and UV-B protection. However, sunscreens are often not sufficient to prevent the reaction. Patients in whom PMLE occurs—and in whom sunscreens and protective clothing have previously failed to prevent the rash—may benefit by preparing themselves for a winter tropical vacation by using an indoor tanning facility to “harden” their skin.

The reaction of PMLE will likely be a recurring event for this girl. The next time her parents plan a family winter vacation to a tropical climate, I would advise them not only to pack a potent topical corticosteroid but also to take a short course of prednisone with them. In certain circumstances, such as when previous reactions have been severe enough to significantly interfere with enjoyment of a vacation, I have pretreated patients with systemic corticosteroids as they are embarking on their vacation.