The following cases review the current diagnostic challenges associated with pediatric tuberculosis (TB) in the United States and the recommended anti-TB treatment protocol. The first case emphasizes the difficulty in diagnosing pulmonary TB in an infant who has a nonspecific presentation and no travel or contact history. The second case serves as a reminder to maintain a high index of suspicion when evaluating a neck mass or abscess and to place TB high on the differential when a young patient presents with cervical lymphadenopathy and a history of recent travel.

Case 1: Pulmonary Tuberculosis in an Infant

A 10-week-old white baby girl with a history of difficulty in breathing presented with stridor, tachypnea, wheezing, and increased work of breathing.

She was born to a 19-year-old mother after an uncomplicated pregnancy and delivery. Results of prenatal testing were normal. The mother first noted abnormal breathing sounds at about age 4 to 6 weeks. At age 9 weeks, the infant was hospitalized for possible sepsis because of persistently elevated temperatures. A chest radiograph showed nonspecific increased bronchovascular markings. A viral syndrome was diagnosed, and the infant was discharged.

The infant’s symptoms gradually worsened. By the time of presentation at 10 weeks, she had decreased feeding because of fatigue and had lost weight. There was no history of fever with chills, night sweats, nausea, or vomiting. She had no sick contacts, drug allergies, or travel history. Her immunizations were up-to-date, and her developmental history was age-appropriate. She lived with her stay-at-home mother and 36-year-old father, who had been released from jail about 11 months earlier after having been incarcerated for 5 years. He was currently unemployed.

The baby was in moderate respiratory distress but smiling. Temperature was 36.7°C (98°F); heart rate, 150 beats per minute; respiration rate, 36 breaths per minute; and blood pressure, 137/55 mm Hg. Weight was 4.68 kg (10.3 lb). Ear, nose, and throat findings were normal. The infant had coarse breath sounds bilaterally (greater on the right than on the left) and increased transmitted upper airway sounds, with audible stridor and wheezing. She also had intercostal and subcostal retractions.Heart, neurological, and abdominal findings were unremarkable.

Results of a complete blood cell count showed lymphocyte predominance. Results of a basic metabolic panel were normal. The C-reactive protein level was 6.7 mg/L; erythrocyte sedimentation rate, 8 mm/h; hemoglobin level, 9.6 g/dL; and hematocrit, 29%. Polymerase chain reaction (PCR) testing was positive for Cytomegalovirus and negative for Toxoplasma, HIV, Epstein-Barr virus, and respiratory syncytial virus. A chest radiograph showed a hyperinflated right lung with a shift of the mediastinal contents into the left hemithorax, suggestive of air trapping and consolidation in the right upper lobe and hilar region (A); there was no thymic shadow. A CT scan of the chest showed diffuse mediastinal and right hilar adenopathy (B); this caused partial compression of the right main-stem bronchus. MRI showed bilateral pleural effusion with hilar lymphadenopathy and mediastinitis. 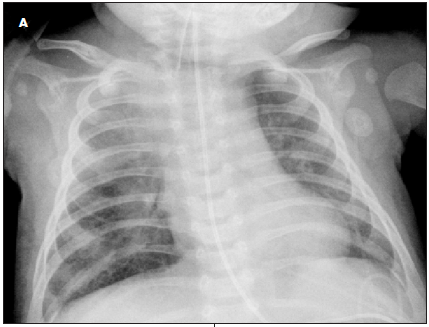 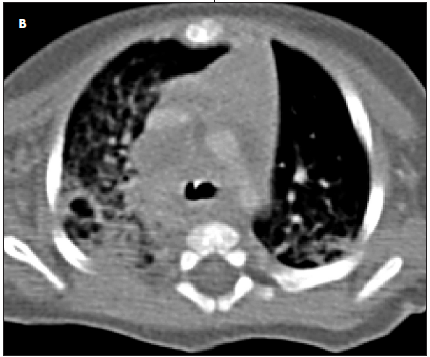 Bronchoscopy was performed with difficulty because of airway compression. Examination of bronchial alveolar lavage fluid by PCR and culture was positive for Mycobacterium tuberculosis. A tuberculin test showed 10-mm induration, which, because of this patient’s young age and developing immune system, could be interpreted as positive. Typically, an induration of 15 mm or more is considered positive in persons with no known risk factors for TB. The father had undergone a tuberculin test before and after his release from jail; the results were negative on both occasions. There was no family history of TB exposure, suggestive symptoms, or positive tuberculin tests. Although the source in this case was not identified, it was thought to be an adult with cavitary pulmonary disease. Poverty, poor housing, urban environments, and overcrowding are all associated with increased risk of TB transmission.

The diagnosis of infant TB is complicated by the lack of a clear response to a tuberculin skin test, the absence of a gold standard diagnostic test,1,2 and the difficulty in collecting respiratory specimens (infants and children produce smaller amounts of sputum, which is usually swallowed rather than expectorated).

Diagnostic testing. Morning gastric washings can be used to isolate M tuberculosis; however, the procedure requires hospitalization and overnight fasting for up to 3 consecutive nights. Consequently, the results rarely confirm the diagnosis. Sputum microscopy—often the only diagnostic test available in areas where TB is endemic—is positive in fewer than 10% to 15% of children with probable TB.3,4 Culture yields are also low: M tuberculosis is detected in less than 30% to 40% of samples.4,5 Thus, alternative strategies for diagnosing TB in children with sputum smear–negative disease have been developed. In areas where TB is not endemic, the following triad has been used in clinical practice (at least 2 criteria must be met for diagnosis)5:

The International Standards for TB Care has recommended this approach.6

Treatment and outcome. This infant was initially treated with intravenous dexamethasone( and racemic epinephrine( nebulization, along with antibiotics. She was then transferred to the pediatric ICU and intubated. After the diagnosis of primary progressive pulmonary TB, anti-TB therapy with isoniazid, rifampin, pyrazinamide(, and ethambutol( was started. Initiating this treatment regimen as soon as possible in an infant with pulmonary TB is especially important because early and proper treatment minimizes the risk of multidrug-resistant TB, which is difficult to treat. The patient was not placed in a negative-pressure room; infants have decreased forced expiratory volume and tidal volume and thus pose a negligible risk of transmission. Liver function was monitored because isoniazid( is associated with a risk of hepatotoxicity in adults. Baseline and follow-up ophthalmological evaluations were also advised because of the risk of retrobulbar neuritis, blurred vision, and visual defects associated with ethambutol use.

The infant responded well to treatment. She gained weight and became more active and playful. When she was feeding well, she was discharged and scheduled to continue with DOTS—“directly observed therapy, short course.” In this 6-month regimen, patients receive isoniazid, rifampin, and pyrazinamide for the first 2 months and isoniazid and rifampin for the remaining 4 months. When drug resistance is possible, initial therapy includes a fourth drug (eg, ethambutol or an aminoglycoside) until drug susceptibility results are available. If after 2 months of therapy a chest radiograph reveals a cavitary lesion or sputum smear remains positive, this regimen is extended to 9 months.

EDITOR'S NOTE: To read a commentary on Case 1 and the authors' response, see Countering Urban Myths About Pediatric Tuberculosis.

For 3 months, a 16-year-old African American boy had 2 enlarging lumps on the left side of his neck. He had no significant medical history and was not taking any medications. Two months earlier, he had been evaluated by his primary care physician, who told him to go to the emergency department after a positive tuberculin skin test result; however, he was nonadherent. A chest radiograph at that time showed no evidence of a pulmonary process. The patient denied cough, weight loss, chills, night sweats, upper respiratory tract symptoms, nausea, vomiting, and diarrhea. Seven months before presentation, he had visited Haiti for 5 days. He denied any exposure to TB. His sibling, whom he had traveled with and currently lived with, also had lumps on his neck.

The teenager appeared healthy and was in no acute distress. He had 2 distinct nontender masses on the left side of the neck: 1 posterolateral mass that was firm and about 3 x 5 cm, and 1 anterior mass that was fluctuant and about 2 x 3 cm. There were no overlying skin changes. 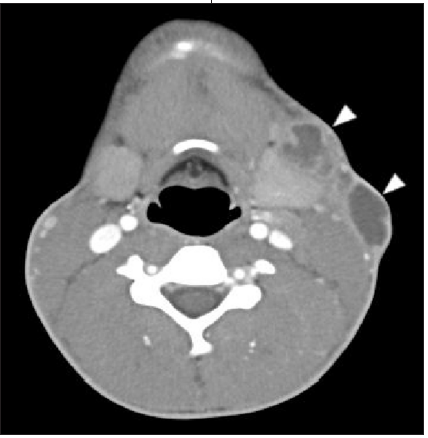 About 15% of TB cases present with extrapulmonary manifestations, of which 60% are scrofula, or cervical tuberculous lymphadenitis.1 For unknown reasons, this condition is most prominent among children, women, and minorities. One study suggested that women and younger persons may be at higher risk for extrapulmonary TB in countries where there is a high burden of TB,2 such as Haiti. Cervical tuberculous lymphadenitis is usually painless, persistent, and unilateral,3 although a case of bilateral supraclavicular lymph node TB has been reported.4

Clinicians must maintain a high index of suspicion when evaluating patients with a neck mass or abscess and include TB in the differential diagnosis of such lesions. This is especially true in immigrants and in patients with HIV infection, among whom there is an increased incidence of TB.2 Cervical lymphadenopathy is strongly associated with TB in patients with HIV infection, presumably because of the immune system’s inability to contain the mycobacteria in a pulmonary Ghon complex.1 About 50% to 67% of patients who have AIDS and TB present with extrapulmonary manifestations, most commonly involving cervical nodes and bone marrow.2 In patients with anergy (immune unresponsiveness), a tuberculin test reaction of 5 mm or more should be considered positive. HIV testing is prudent in any patient with pulmonary or extrapulmonary TB. Results of HIV testing in this patient were negative.

Cervical lymphadenopathy caused by mycobacteria can be either tuberculous or nontuberculous. Because the nontuberculous strains Mycobacterium avium and Mycobacterium scrofulaceum are associated with high levels of resistance to treatment, it is important to differentiate these from M tuberculosis. M scrofulaceum infection can cause cervical adenitis in children; it more commonly results in pulmonary disease in adults, and on rare occasions, it has been reported to cause skin disease.5 In HIV-negative children younger than 12 years, mycobacterial cervical lymphadenopathy is usually caused by a nontuberculous strain, whereas mycobacterial lymphadenitis in patients older than 12 years usually indicates TB.

Diagnostic testing. The finding of a cervical mass in a patient with risk factors for TB necessitates a tuberculin skin test and isolation in a negative-pressure room. Sputum culture is often obtained; however, fine-needle aspiration of the lymph node is more specific for diagnosis. While waiting for these cultures to yield organisms, acid-fast bacillus smear and culture results can be used to guide the choice of medical therapy.

Treatment and outcome. Treatment of extrapulmonary TB may vary. Patients with cervical tuberculous lymphadenitis are given a 4-drug regimen of isoniazid, rifampin, ethambutol, and pyrazinamide or streptomycin(, followed by a 2- drug regimen, once susceptibilities are determined. Therapy is administered for a total of 6 months, or for at least 9 months in patients with CNS or bone and joint involvement. This therapy has proved quite effective, and surgery is rarely required.6

This patient remained in stable condition throughout his 8 days in the hospital. At discharge, he was scheduled to continue his anti-TB regimen and follow up with his primary care physician. The Department of Health and Human Services was notified and monitored the patient from that point. 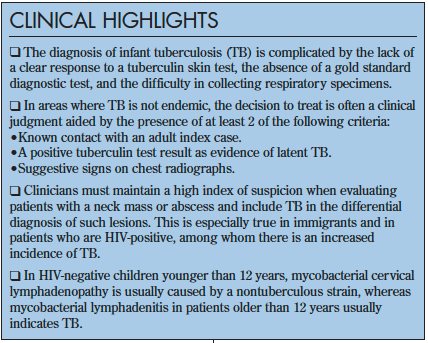