Cardiovascular Issues in the Older Adult

A significant drop in blood pressure when standing up from a seated or lying position is known as orthostatic or postural hypotension. This can occur acutely with severe dehydration or blood loss, which is usually overt. Chronic orthostatic hypotension becomes relatively common with aging and the presence of frailty, but it can present insidiously and atypically. Undiagnosed or poorly treated orthostatic hypotension can contribute significantly to debility and mobility problems. The following cases illustrate how patient function can be adversely affected when orthostatic hypotension is not properly detected and treated.

Mr. H was a 74-year-old man who received a diagnosis of orthostatic hypotension 5 years earlier by a neurologist. At that time, he was started on fludrocortisone and was instructed to use a wedge pillow while sleeping. The patient was functional in activities and instrumental activities of daily living, was active, and was only mildly symptomatic over the following 5 years. Mr. H then underwent urologic surgery for bladder neck stricture that required a period of postoperative bed rest. Shortly after his period of bed rest, he fell and developed a subdural hematoma. The patient spent a total of almost 2 months convalescing in a rehabilitation facility after his urologic surgery due to his subdural hematoma and other medical complications. During his recovery, midodrine was added to his treatment regimen for worsening orthostatic hypotension. Four months after his urologic surgery, the patient still could only stand for 20 seconds at a time, which made rehabilitation problematic, so he was discharged from therapy by his physical therapist. Pyridostigmine was then added to his treatment regimen by his neurologist, but he remained wheelchair-bound due to light-headedness. Two weeks after pyridostigmine was started, Mr. H was admitted to a geriatric evaluation and management unit because of persisting light-headedness. His lying systolic blood pressure was 157 mm Hg, which fell to 88 mm Hg after 3 minutes of standing. On inquiry about his use of the wedge pillow, he stated that he had used it nightly for 5 years to elevate his legs to reduce edema and that he did not know that the pillow was intended to elevate his head. Over the next month, the patient was treated with elevation of the head of his hospital bed to 20 degrees and was continued on midodrine and pyridostigmine. Fludrocortisone was stopped due to worsening edema. He gradually resumed ambulation of household distances, and he especially benefitted from aquatic physical therapy, as the chest-high water prevented hypotension and permitted extended periods of mobility. After 6 weeks, he was discharged from the geriatric evaluation and management unit and was continued on midodrine and pyridostigmine.

Mr. J was a 77-year-old man with diabetic neuropathy, hypertension, and nocturia, who was admitted to the hospital for episodic leg weakness. His medications included furosemide, doxazosin, and nortriptyline. The patient was found to have symptomatic orthostatic hypotension, which improved after the furosemide was stopped. Two years after he was discharged, he returned to the emergency department because of episodes of near-syncope, during which he became quite pale. The emergency department physician’s note stated “no orthostatic blood pressure changes,” but it did not document values or how this finding was obtained. Mr. J was sent home, but he was readmitted 3 weeks later with severe dizziness. Midodrine was added to his treatment regimen, and he was transferred to a geriatric evaluation and management unit. At transfer, the patient’s lying systolic blood pressure was 144 mm Hg, which fell to 75 mm Hg after 3 minutes of standing. Two of his chronic medications, doxazosin and nortriptyline, were stopped and the head of his hospital bed was elevated to 20 degrees. Mr. J’s light-headedness resolved, and within 1 year, the midodrine was stopped without recurrence of his symptoms.

Normally, when the body moves from lying to standing, there is an immediate brief drop in systemic vascular resistance and blood pressure. Vascular resistance increases above baseline level within a few seconds of standing, and blood pressure is normalized within 15 seconds of standing. This transient fall in blood pressure does not increase with age. Indeed, an exaggeration of this transient initial orthostatic hypotension occurs most frequently in otherwise healthy young subjects and can only be detected with equipment to monitor continuous beat-to-beat blood pressures.1 The remainder of this article will discuss typical orthostatic hypotension, which occurs more slowly and increases in prevalence with aging.

With standing, a gradual pooling of blood in the legs and splanchnic bed occurs. The baroreceptor reflex compensates largely through increased systemic vascular resistance. Both aging and chronic hypertension diminish postural compensation through a reduction in baroreceptor sensitivity and arterial compliance.2 As a consequence, supine hypertension is a major risk factor for orthostatic hypotension. In addition, there is an attenuation of alpha-1 vasoconstrictor responsiveness to sympathetic stimulation with aging.3 Bed rest, which often occurs with infirmity, accentuates orthostasis, as 1 week of bed rest causes plasma volume to decrease 300 to 500 mL.4

Symptoms and Diagnosis of Orthostatic Hypotension

Symptoms of orthostatic hypotension are variable in character and timing. Some patients describe light-headedness or near-syncope, and many describe nonspecific symptoms such as paroxysmal severe fatigue, generalized weakness, or the urgent need to sit down after a period of standing. At my institution, we had a 62-year-old patient with diabetes who was recovering from below-the-knee amputation whose systolic blood pressure dropped from 123 mm Hg while lying to 71 mm Hg after standing for 3 minutes. Upon standing, he informed the nurse that he needed to sit down immediately, but he denied feeling light-headed. My institution has had numerous previously undiagnosed patients who were found on prompt measurement to be quite hypotensive after they “gave out” after walking a few minutes between the parallel bars during physical therapy and asked urgently to sit down.

Orthostatic hypotension can cause falling and syncope. An assessment of elderly fallers in a long-term residential care facility found that orthostatic hypotension was the primary cause of falling in nearly 16% of persons in the intervention group and a possible contributing factor in an additional 26% of persons in the intervention group.6 A review of 2106 patients age 65 years or older who were admitted to a teaching hospital after syncope determined that orthostatic hypotension was the cause in 13%, yet postural blood pressure recording was performed in only 38% of subjects.7 This test had the highest yield for determining the etiology of the syncopal episode, whereas cardiac enzyme tests, head computed tomography scans, electroencephalography, and carotid ultrasonography had the lowest yield.

Measurements for orthostatic hypotension are obtained during 3 minutes of quiet standing,8 which is preceded by measurements in the recumbent position. Patients should preferably be lying for 5 minutes before blood pressure is measured. Two-thirds of patients with orthostatic hypotension may go undetected if the maneuver is performed from sitting-to-standing positions.9 Some studies recommend measuring blood pressure after 1 minute as well as 3 minutes of standing, as hypotension was somewhat more common after 1 minute of standing and the 1-minute decline in systolic pressure was more sensitive in predicting risk of subsequent falls.10 Orthostatic hypotension is most prevalent in the morning when a person first arises.11 In addition to within-day variability, there is variable day-to-day reproducibility, so clinicians should perform postural measurements several times in symptomatic patients before excluding the diagnosis of orthostatic hypotension.12

Conditions causing autonomic dysfunction that may be associated with orthostatic hypotension are broken down into those with central nervous system features and those with peripheral nervous system features (Table). Most of these conditions are more prevalent with aging, although pure autonomic failure should be suspected in young or middle-aged patients with orthostasis in the absence of volume depletion. Clinicians should have a high index of suspicion for orthostatic hypotension in patients who have one of these diagnoses if they are falling or feeling profoundly weak. 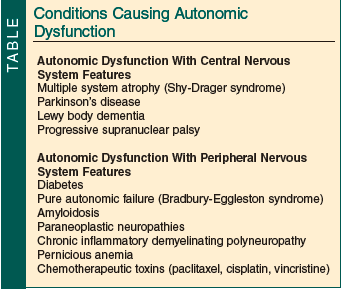 If symptomatic orthostasis persists after discontinuation of exacerbating medications and assurance of volume repletion, the clinician should institute additional measures. It is sometimes advisable to practice permissive hypertension, reducing antihypertensive medications and accepting some supine hypertension in the patient to maintain postural tolerance. Raising the head of the bed 6 inches or to approximately 20 degrees results in improved orthostatic tolerance.19 This decreases nocturnal diuresis and enhances cerebral autoregulation by reducing supine hypertension. A small, short-term study found that waist-high compression hosiery garments with 20 to 30 mm Hg compression reduced orthostatic hypotension and frequently abolished orthostatic dizziness in elderly patients.20 Whether shorter garments are effective is unclear, although another small study of water immersion for patients with orthostatic hypotension demonstrated persistent hypotension with standing immersion to the upper thigh but abolishment of hypotension with standing immersion to the midabdomen.21 These findings are not unexpected, as patients with orthostatic hypotension have pooling of blood in the splanchnic circulation and not just in the legs.

Sometimes nonpharmacologic measures for the treatment of orthostatic hypotension are insufficient. Fludrocortisone treatment for orthostatic hypotension lacks large randomized trials, but in small uncontrolled trials it has been found to prevent postural hypotension.22 It enhances extracellular volume and systemic vascular resistance23 and increases blood vessel sensitivity to catecholamines. Treatment is initiated at 0.1 mg daily and is increased weekly as needed to a maximum of 0.5 mg daily. As a synthetic mineralocorticoid, fludrocortisone causes sodium retention and potassium loss and can cause worsening of heart failure and supine hypertension.

Midodrine is a peripheral alpha-1 agonist that does not cross the blood-brain barrier, so it causes less anxiety and tremor than other alpha agonists such as pseudoephedrine. A randomized controlled trial in which subjects took midodrine for 3 weeks found it to be effective in reducing orthostatic hypotension and associated symptoms.24The main adverse effects of midodrine are pilomotor reactions, urinary retention, and supine hypertension. As a vasopressor, the peak effect occurs after 1 hour, with a duration of action of 4 hours. As a result, this thrice-daily medication is dosed early in the day (eg, at 7:00 AM, 11:00 AM, and 3:00 PM). Patients should strictly avoid the recumbent position during the period of midodrine activity. Treatment is initiated at 2.5 mg 3 times daily, with a maximum dose of 10 mg 3 times daily. It may be given concomitantly with fludrocortisone.

Pyridostigmine is a peripheral acetylcholinesterase inhibitor that has been shown in a short-term, randomized controlled study to reduce the fall in standing blood pressure with no significant increase in supine blood pressure, which corresponded with improvement in symptoms of orthostasis.24 The therapeutic rationale is that the cholinesterase inhibition amplifies the signal at the sympathetic ganglion, increasing the release of norepinephrine by the postganglionic nerves. There is less risk of supine hypertension, as sympathetic activity is low in the supine position. Treatment is initiated at 30 mg twice daily, with a gradual increase to a maximum of 60 mg 3 times daily. Adverse effects include diarrhea, urinary urgency, nausea, and bradycardia.

Other treatments such as erythropoietin, caffeine, and nonsteroidal anti-inflammatory drugs have been studied for orthostatic hypotension, but only in small numbers of patients or in an uncontrolled manner. Caffeine has been studied more extensively for the treatment of postprandial hypotension.

Chronic orthostatic hypotension should be suspected in older patients with hypertension who present with light-headedness, paroxysmal weakness, or syncope. It is essential that orthostatic blood pressure measurements are performed correctly, as prematurely obtaining the standing measurement will cause a significant underestimation of postural fall in blood pressure. If there is a high index of suspicion, the standing measurement should be extended beyond the usual 3 minutes of standing. In patients with large postural drops in blood pressure, it is worthwhile to stop potentially offending medications, but it is inadvisable to broadly stop antihypertensive medications, as chronic control of hypertension reduces orthostatic tendencies. Measures such as raising the head of the bed to 20 degrees and wearing waist-high compression garments have been found to be effective. Persistent symptomatic orthostatic hypotension should be treated cautiously with pharmacologic interventions. Proper attention to detail in the diagnosis and treatment can lead to a reduction in symptoms and improved quality of life.

8. Consensus statement on the definition of orthostatic hypotension, pure autonomic failure, and multiple system atrophy. The Consensus Committee of the American Autonomic Society and the American Academy of Neurology. Neurology. 1996;46(5):1470.