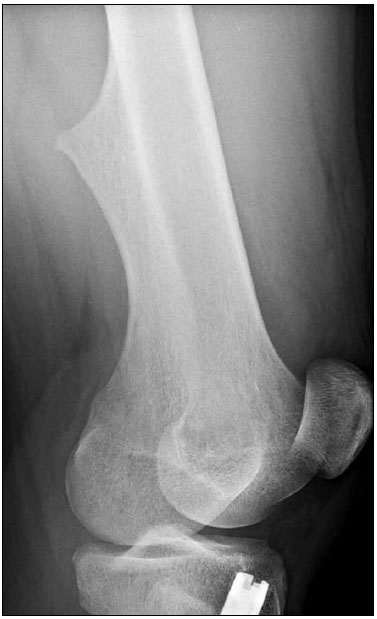 How Do You Read This Image?
An 18-year-old boy presents with pain and swelling of his left thigh that developed suddenly 2 days earlier. He denies any recent trauma to the site, fevers, or weight loss.

On examination, an area of swelling is visible over the lower half of his left thigh. No erythema or other associated skin changes are noted. Distal pulses are palpable. The patient has full range of motion.

Plain radiographs of the knee are shown.

What do the findings show and do they point to the cause of this patient’s symptoms?

Radiology Quiz
How Do You Read This Image?
(Continued) 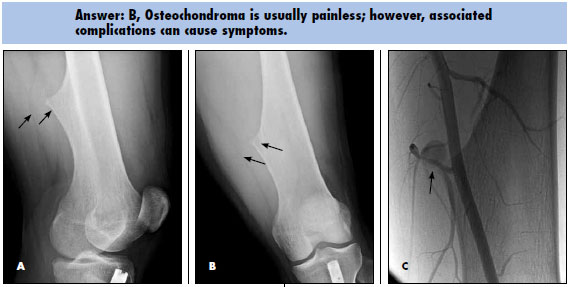 Along with mild soft tissue swelling in the distal thigh, the radiographs show an eccentric cortical outgrowth from the distal femur, directed away from the joint (A and B). The rod and nail present in the proximal tibia is related to a prior fracture.

The image findings are classic for osteochondroma. This cartilage-capped bony projection may arise from the external surface of any bone of cartilaginous origin. However, osteochondromas most commonly occur in the long bones. Similar to the physeal growth plate, an osteochondroma ceases to grow at puberty; cartilage decreases in thickness and undergoes ossification.

Osteochondromas are the most common benign bone tumors in children. Most of these lesions are solitary and nonhereditary. Multiple tumors occur 15% of the time in the context of multiple osteochondromatosis, an autosomal dominant condition. The usual presentation of osteochondroma is a painless, slowly growing mass. However, symptoms may develop as a result of complications depending on the location of the lesion. Such complications include fracture and bursa formation as well as impingement of adjacent nerves, spinal cord, tendons, and vessels. Continuous abrasion of a vessel may lead to a pseudoaneurysm, which is the most common vascular complication.

Among the items in the differential diagnosis, the most important to consider in this case would be parosteal osteosarcoma. Malignant transformation is seen in 1% to 5% of lesions; the higher percentage applies to cases of multiple lesions. The most common malignant tumors associated with osteochondromas are low-grade chondrosarcomas. Pain, growth beyond puberty, and cartilage thickness of greater than 1 cm in adults are indicative of malignancy.