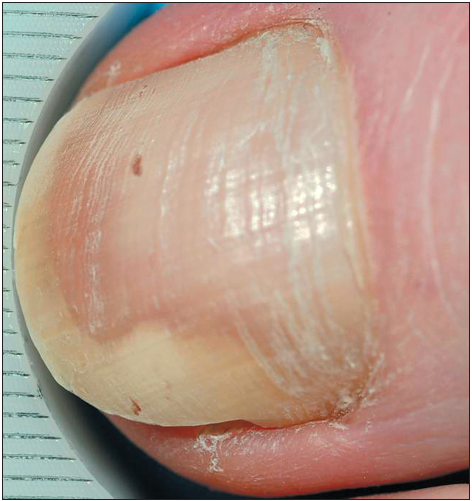 This 13-year-old boy plays basketball for his school team. His mother brings him to your office and asks you about her son's toenail that has changed appearance and now looks like his father's great toenail. The father has psoriasis.

She wonders whether psoriasis is developing in her son and whether he might need to take methotrexate( (as his father does). She is concerned about the potential side effects of the drug.

What do you think?

Case 1: The most common differential diagnostic possibilities here are psoriasis of the nail plate, a dermatophyte infection, or a combination of the two. It is unusual for children to acquire a dermatophyte nail plate infection. In my practice, however, such infections are becoming more common-- particularly in student athletes.

The clinical examination of children with this differential diagnosis should include a search for other manifestations of psoriasis, such as nail changes (pitting) and psoriatic plaques on the scalp, elbows, knees, or in the gluteal crease. Onychomycosis is often associated with tinea pedis; affected children should also be examined for concomitant tinea capitis.

A fungal culture is necessary to diagnose a dermatophyte infection of the nail. Keep in mind that psoriasis may destroy the nail plate enough to allow a secondary dermatophyte infection. The diagnosis must be confirmed by culture of the nail clippings and subungual debris of the affected nail. In more than 90% of cases, the organism is Trichophyton rubrum. The most common morphologic presentation is distal lateral subungual onychomycosis (DLSO). (Other presentations of onychomycosis include superficial, proximal subungual, endonyx, and total dystrophic onychomycosis.1)

Systemic therapy is considered the most effective treatment of onychomycosis. In children with DLSO that does not involve the nail lunula, I start with topical therapy. New topical delivery systems have been developed that provide excellent delivery of inhibitory concentrations of antifungal medication. Children often respond, and there is virtually no chance of systemic toxicity.

I ask the patient or parent to apply ciclopirox( 8% nail lacquer every day for 6 months. If there is no clinical effect, I then introduce the child's parents to the possibility of combination therapy with systemic antifungals. Terbinafine is most commonly used, but both itraconazole( and fluconazole( may be effective. I also consider using the nail lacquer as prophylactic therapy once the infection has cleared.

None of these medications is approved for the treatment of onychomycosis in children. Thus, the risks and benefits of therapy for each patient must be carefully evaluated. 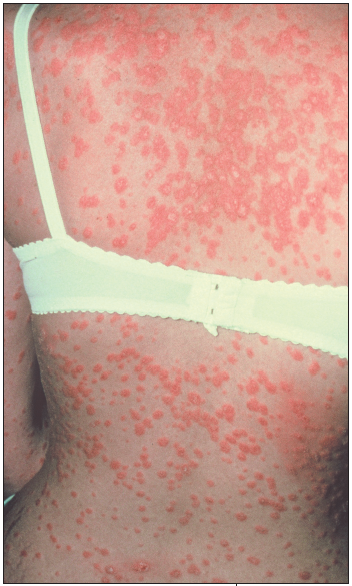 This teenager had a very severe sore throat approximately 2 weeks before her rash suddenly developed. She had been taking penicillin. Her pediatrician thought the rash was a drug reaction and discontinued the therapy. Nevertheless, the rash has persisted for over 4 weeks after the drug was stopped, and the girls' parents are concerned.

Does this look like an allergic reaction to you--or is something else going on?

Case 2: This young girl has a generalized papulosquamous eruption made up of multiple 3- to 7-mm papules that spare the palms and soles. There is a fine white scale over the surface, which, when removed, shows pinpoint bleeding on the papule surface (the Auspitz sign). Her mucous membranes appear normal. The clinical diagnosis is guttate psoriasis.

Guttate psoriasis is often the first presentation of psoriasis in adolescents. There is often no known family history of psoriasis. The eruption classically follows streptococcal pharyngitis but has been reported in association with upper respiratory tract infections and viral flu. The rash does not respond to the treatment of the precipitating infection. 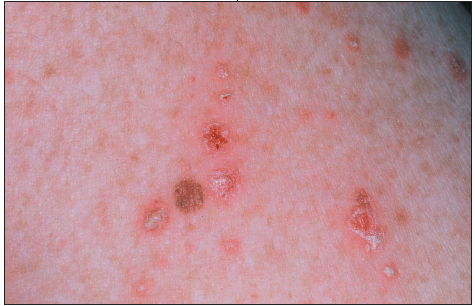 The natural history of guttate psoriasis varies. In some children, the eruption will resolve over months and may recur with the next infectious event. In others, it heralds the first manifestation of a life-long struggle with psoriasis.

The Auspitz sign is a reflection of the histologic appearance of psoriasis. When the scale is removed, the capillary tips are exposed and the trauma of the removal causes pinpoint bleeding. This sign is characteristic of all types of psoriasis.

Therapy must be individualized. I use topical corticosteroids and UV light most often--at least until the natural history of the patient's psoriasis declares itself. Topical vitamin D analogues are also useful, but they may take longer to act. I also ask patients to ensure that they receive prompt therapy for recurrent infections that may trigger their psoriasis.