A 27-year-old US Navy submariner presented with concern for “itching.” His symptoms had begun approximately 3 weeks prior to presentation. He reported that the itching had occurred almost daily and was most noticeable after returning from work and changing out of his often-damp duty uniform. He described itchiness of the bilateral forearms, bilateral thighs, and bilateral ankles. Scratching these areas caused what he called “hives,” which only intensified the pruritus.

History. He had tried a short course of over-the-counter loratadine without significant relief. He denied lesions on the palms, soles, face, or genitalia. He denied the use of any new cleaning detergents, lotions, sprays, or other topical agents. He denied any new occupational exposure to chemicals or solvents. He denied nausea, vomiting, or gastrointestinal tract upset. He denied swelling of the lips or tongue, dyspnea, and dysphagia.

His past medical history was significant for gastroesophageal reflux disease, which had been managed with a proton-pump inhibitor, but was otherwise negative for allergies, asthma, or skin diseases. He had been working on submarines for almost 5 years, including deployments, without similar symptoms.

Physical examination. The patient was a well-appearing man in no acute distress with normal vital signs. Examination findings of the head, eyes, ears, nose, and throat were normal. A skin examination revealed a poorly defined, 3-cm, erythematous patch on the flexor surface of the left forearm. Wheal and flare were noted on the left inner arm superior to the elbow.

A tongue blade was drawn firmly across the distal flexor surface of the left forearm, producing a wheal of greater than 2 mm in width in less than 1 minute (a positive Darier sign) (Figure). He received a clinical diagnosis of dermatographism. 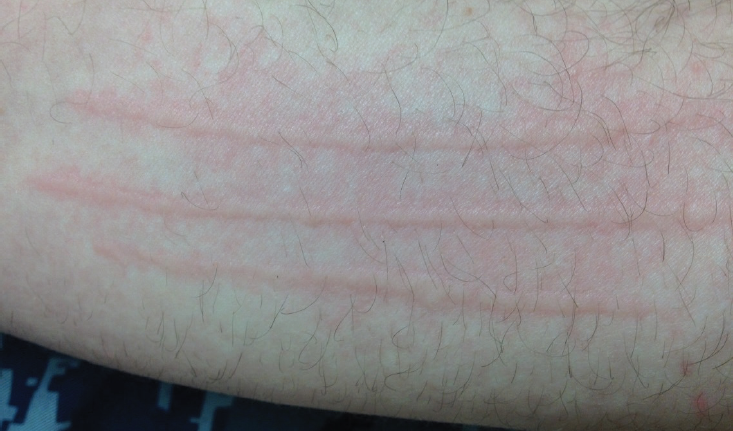 Discussion. Urticarial rashes are common presentations in primary care. The specific causes are wide ranging, but it has been estimated that 20% to 30% of cases of chronic-type urticaria are due to physical urticaria.1 Physical urticaria refers to the phenomenon of pruritic wheal-and-flare skin reactions precipitated by external physical stimuli. Various subtypes of physical urticaria are characterized by the nature of the eliciting stimulus, including dermatographism, vibratory urticaria/angioedema, cold contact urticaria, heat contact urticaria, solar urticaria, aquagenic urticaria, and cholinergic urticaria.2 In each of these diseases, definitive diagnosis usually rests upon provocation tests, some of which might require specialized equipment or specialist referrals. Some tests, however, can be easily performed during the primary care visit with a minimum of equipment.

Dermatographism, or urticaria factitia, has an estimated prevalence of approximately 5% in the general population.2 The condition is characterized by pruritus and whealing of the skin due to shear forces, typically scratching or rubbing. These symptoms can last for 1.5 to 2 hours.2 Although urticaria itself is a mast-cell–driven disease in which histamine and other mediators released from activated mast cells result in vasodilation, sensory nerve activation, and plasma extravasation, the exact pathogenesis of dermatographism remains uncertain.1-3

After a thorough history to rule out other conditions, the diagnosis of dermatographism can be made easily in the clinic by using a firm object such as a tongue blade to stroke the skin, usually of the volar forearm or upper back, which provokes the typical wheal-and-flare response (Darier sign). For optimal results, a special device called a dermatographometer can accurately measure different strengths of shear forces and can aid in monitoring disease progression and assessing therapeutic efficacy.1,2

Conceptually, the treatment of patients with urticaria can be distilled to the identification and avoidance of stimuli, the eradication of any underlying infectious agents, and the pharmacologic treatment of symptoms.3 Complete avoidance of skin exposure to shear forces is likely impossible, so symptomatic treatment is the mainstay of therapy. H1 antihistamines at standard doses are the first-line treatment. Being inverse agonists with preference for the inactive state of the H1 receptor on endothelial cells, these drugs effectively shift the equilibrium toward this inactive state, reducing symptoms.1,3 For refractory cases, other treatments that have shown some efficacy in individual case reports and small studies include omalizumab (used for a patient with an elevated total immunoglobulin E level)4 and narrowband UV-B therapy.5

Outcome of the case. After being educated on the diagnosis and management of his condition, the patient was placed on a daily regimen of cetirizine at a standard dose. He was directed to follow up in 2 to 4 weeks for reassessment. As a result of his occupational demands, he was not seen until approximately 2 months later, at which time he noted that his symptoms were well-controlled on the medication. Self-demonstrated skin provocation did not produce notable whealing after several minutes.