A 31-year-old man with no significant past medical history presented to the dermatology clinic with a pruritic rash affecting his elbows, knees, and trunk that had cropped up intermittently over the past 4 years. The patient denied a history of abdominal pain, bloating, diarrhea, constipation, weight loss, or fatigue.

History. Treatment had been attempted with benzoyl peroxide, topical corticosteroids, doxycycline, and trimethoprim-sulfamethoxazole with little improvement. The patient was not currently taking any medications. He was 188 cm tall and weighed 86.2 kg (body mass index, 24.4 kg/m2).

Physical examination. Skin examination findings were significant for grouped erythematous papules, excoriations, erosions, and crusts distributed over the extensor surfaces of his elbows and knees bilaterally (Figure 1), as well as on the buttocks (Figure 2). The left elbow also demonstrated a discrete area of fragile vesicles (Figure 3). There were no oral abnormalities or abdominal tenderness or distention. 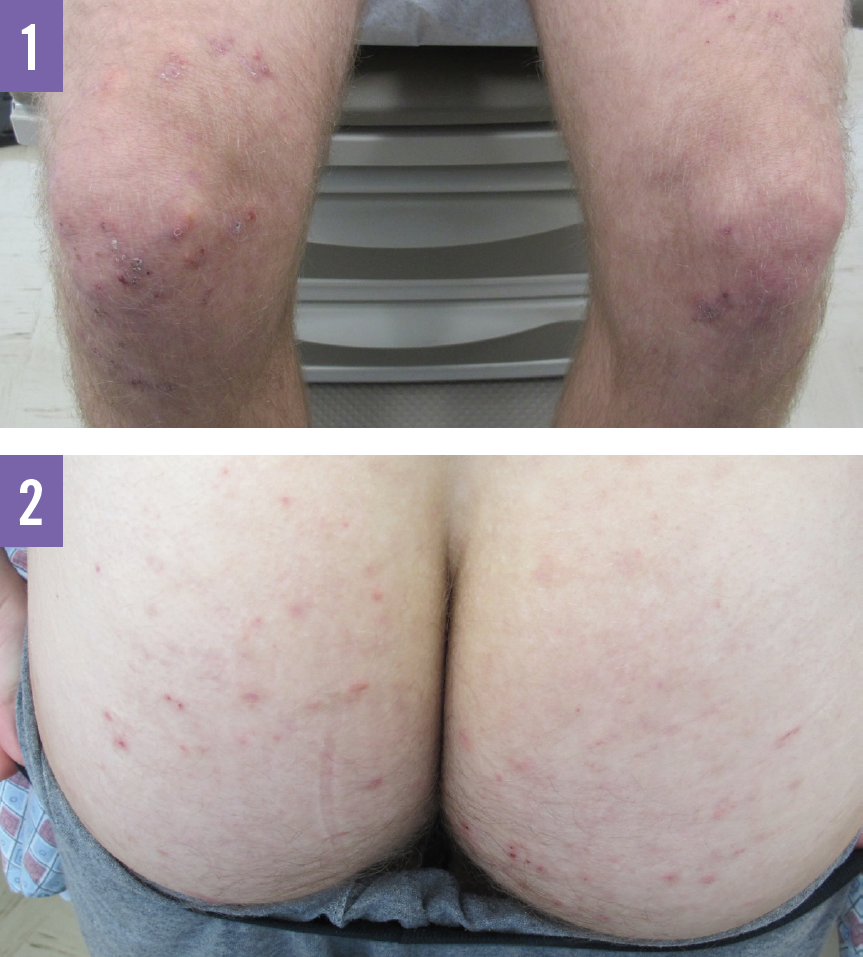 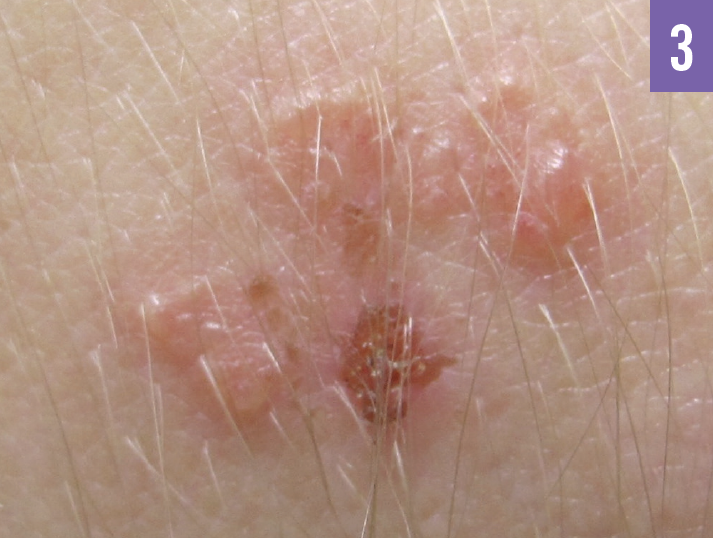 Diagnostic tests. Results of laboratory studies were significant for positive anti-endomysial immunoglobulin A (IgA), elevated titers of antigliadin IgA and immunoglobulin M (IgM), and elevated titers of antitissue transglutaminase IgA. Titers of anti-epidermal transglutaminase antibodies were not obtained. A punch biopsy specimen of perilesional skin of the left elbow treated with hematoxylin-eosin stain showed papillary microabscesses (collections of abundant neutrophils and fibrin at the tips of dermal papillae). On direct immunofluorescence (DIF) microscopy, granular deposits of IgA and fibrinogen were observed in the dermal papillae, consistent with a diagnosis of dermatitis herpetiformis (DH).

Discussion. DH is an uncommon autoimmune cutaneous eruption. In more than 90% of cases, small bowel biopsy specimens demonstrate evidence of gluten-sensitive enteropathy. However, most cases are subclinical.1,2

With an estimated incidence rate ranging from 0.8 to 3.5 cases per 100,000 person-years, the disease most frequently affects individuals of northern European descent, and there is a slight male predominance.3,4 The mean age of disease onset is reported to be in the fourth or fifth decade.4 In addition to gluten ingestion, genetic risk factors exist. The HLA-DQ2 and HLA-DQ8 haplotypes are virtually universally present in patients with DH and are associated with a genetic predisposition to the disease.5

In susceptible individuals, DH develops as a result of a complex immune response involving both intrinsic and extrinsic pathways, which arises from sensitivity to gliadin peptides and tissue transglutaminase. This leads to IgA deposition in the dermis, immune complex formation, and neutrophil chemotaxis, ultimately causing proteolysis and blister formation.6,7

The disease is characterized by intermittent eruptions of grouped, intensely pruritic papules and vesicles (“herpetiforme”) most commonly on the elbows, dorsal forearms, knees, scalp, back, and buttocks bilaterally. Due to the intense pruritus, however, excoriations and erosions may predominate over vesicles. Oral involvement may occur, with development of mucosal erythematous macules, papules, vesicles, and erosions, as well as tooth enamel degradation.8

In the early stages, biopsy specimens may show collections of neutrophils with or without eosinophils, along with fibrin deposits at the tips of dermal papillae. After approximately 2 days, subepidermal vesicles may form at the papillary tips, which later coalesce to form blisters. There may also be a perivascular lymphohistiocytic infiltrate with neutrophils and eosinophils.9

The diagnosis is confirmed with DIF microscopy demonstrating granular deposits of IgA in the papillary dermis.9,10 The diagnosis is supported by the presence of circulating IgA antibodies to epidermal transglutaminase, tissue transglutaminase, and/or endomysium.10 A total IgA level is important when interpreting laboratory and biopsy data, because selective IgA deficiency occurs at a higher frequency in patients with celiac disease. In such cases, measurement of serum immunoglobulin G to tissue transglutaminase and endomysium may be useful.11

Treatment. A tapered dose of dapsone and a strict gluten-free diet are effective treatment options.1,8 Dapsone, an antibiotic most commonly used to treat leprosy and Pneumocystis pneumonia, is also effective in DH, although its mechanism of action is not well understood. It is thought to cause inhibition of myeloperoxidase, thereby leading to an anti-inflammatory and immunomodulatory effect. Dapsone is associated with hemolysis, methemoglobinemia, agranulocytosis, hepatitis, and dapsone hypersensitivity syndrome. Its use is contraindicated in patients with glucose-6-phosphate dehydrogenase (G6PD) deficiency, since it can lead to severe hemolysis. For these reasons, serum G6PD measurement, a complete blood cell count, a reticulocyte count, and liver function tests are recommended prior to dapsone initiation and, with the exception of G6PD level, at various intervals during treatment.12 Mild disease flares are expected and may occur while on dapsone therapy; the dose of dapsone should not be increased in such cases. Once the disease is in remission, dapsone can be slowly tapered over several months; tapering too quickly may result in disease flares.1

Prognosis. Most often, DH is a lifelong condition characterized by intermittent flares, and sustained remission requires a strict gluten-free diet and/or treatment with dapsone.13 Only in 10% to 15% of cases does sustained remission persist despite discontinuation of dietary and pharmacologic therapy.14

Patients with DH are at risk of developing other autoimmune disorders, most commonly autoimmune thyroid disease, type 1 diabetes mellitus, and pernicious anemia.15 For these reasons, screening for thyroid function abnormalities, anemia, and hyperglycemia is recommended.16 There is an association between lymphoma and celiac disease, but the association between lymphoma and DH is less clear.17

Outcome of the case. The patient was initiated on a strict gluten-free diet but was lost to follow-up, preventing initiation of dapsone as intended.