Dental Health: Brushing Up on the Latest Guidelines

Dr Nield is associate professor of pediatrics at West Virginia University School of Medicine in Morgantown.

The pediatrician can have a great impact on ensuring that children obtain needed dental care. A systematic literature review has shown that children referred to a dentist by a primary care provider are more likely to visit a dentist than children who have not been referred.1 Along with the American Academy of Pediatric Dentistry (AAPD), the American Academy of Pediatrics (AAP) supports the establishment of a dental home by 1 year of age, especially for those patients at high risk for early childhood caries.2 Fluoride supplementation for children exposed to inadequate amounts in the water supply can be prescribed by the pediatrician as recommended by the AAPD (Table).3 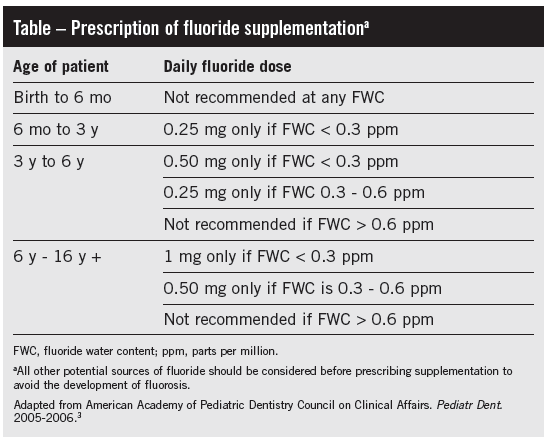 Because of the frequency with which caries occur in American children, most pediatricians probably see patients with untreated dental decay on a weekly, if not daily basis. Physicians are obligated to recommend dental treatment for affected children and to help overcome any barriers to the receipt of care. If, in the pediatrician’s opinion, the parent willfully fails to seek dental care for the child despite barrier removal, the parent may be responsible for dental neglect as defined by the AAPD.5 Dental neglect must be reported to Child Protective Services like any other form of abuse or neglect.

The cause of early childhood caries is multifactorial, but the 2 main culprits that interact at the tooth surface are dietary sugar and bacteria—particularly Streptococcus mutans. Infants are known to acquire S mutans from their mothers or primary caregivers in the first 2 years of life.6,7 Exposure to sugary drinks from a bedtime bottle or frequent consumption of carbonated soft drinks8 places young children at increased risk for dental decay. The acidic by-products of the bacterial metabolism of sugary substances lead to the development of plaque. Plaque adheres to the tooth surface and causes dental demineralization or the leaching out of important minerals (ie, calcium, phosphate, and carbonate).

Untreated dental caries can lead to periodontal abscesses (Figure). Because of the adjacent location of anatomic structures, facial cellulitis and maxillary sinusitis may result from direct extension of the odontogenic infection, which causes tissue breakdown and bone resorption.9 Further extension of this infectious process could potentially affect intracranial structures, leading to brain abscess or orbital cellulitis. Untreated odontogenic infections can also lead to Ludwig angina—a rare severe condition involving extension of infection into the floor of the mouth and beyond, with potential airway compromise.10 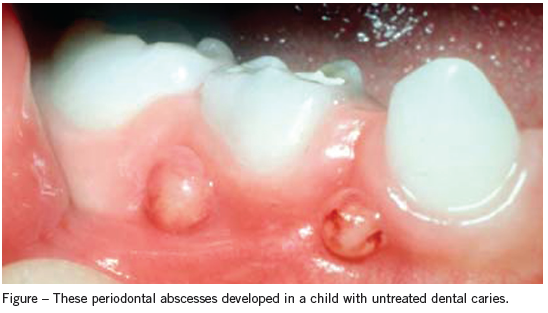 When inspecting a child’s mouth, look for cavitated or noncavitated dental lesions, dental fillings, and missing teeth. The presence of gingivitis and/or plaque, chalky white spots, or deep fissures on the teeth are evidence of dental decay.11 Refer any child with worrisome findings to the pediatric dentist.

Pediatricians play an important role in preventing early childhood caries. According to the AAPD and the AAP,2,12 caries prevention strategies that can be discussed at well-child visits include:

•The promotion of daily flossing.

Recommendations also include the establishment of a dental home—an approach to ensuring that all children have access to oral health education, oral health exams, and oral health treatments.

Ideally, soft drinks should be avoided completely. Juice should not be introduced into youngsters’ diets before 6 months of age, nor should it be served in bottles or offered at bedtime.13 Advise parents of children younger than 3 years to initiate a routine of cleaning the child’s teeth as soon as the first tooth erupts and to avoid food- and utensil-sharing to decrease vertical transmission of S mutans.

The AAPD supports the use of xylitol in caries prevention. Evidence suggests that chewing 4 pieces of gum each day by the child’s mother or caregiver significantly decreased the child’s caries rates.14 The AAPD Guidelines on xylitol use site 2 studies, one in which xylitol syrup (8 g/d) reduced early childhood caries by 50% to 70% in children 15 to 25 month of age, and another in which consumption of gum or lozenges (5 g/d) at about age 10 years resulted in 35% to 60% reductions in tooth decay.15 The AAP does not recommend chewing gum use in children younger than 4 years. Xylitol is a sugar substitute that inhibits growth of S mutans.

The AAPD also recommends the Caries-Risk Assessment Tool (CAT)11 to identify children at high risk for caries. The CAT is available on the AAPD Web site.11 Some factors listed in the CAT that signal increased risk of caries are an underlying health condition, lack of a dental home, a history of decay in a close relative, previous caries, between-meal sugar exposure, lack of fluoride exposure, and toothbrushing less than once per day.11

11. American Academy of Pediatric Dentistry. Policy on the use of a caries-risk assessment tool (CAT) for infants, children, and adolescents. Adopted 2002, revised 2006. Available at: http://www.aapd.org/media/Policies_Guidelines/P_CariesRiskAssess.pdf. Accessed January 16, 2013.