A 13-year-old girl with a history of asthma, chronic headaches, and recurrent vaginitis presented to the emergency department (ED) with a 1-month history of painless left inguinal swelling, a 3-day history of diffuse pruritus, and a 2-day history of worsening left inguinal pain, myalgia, and fever. She initially had been seen by her primary care provider, but given her worsening pain and fever, the girl’s mother brought her to the ED for further evaluation.

On presentation, the patient was febrile at 39.8°C, tachycardic at 136 beats/min, and mildly hypotensive with the lowest blood pressure recorded at 97/43 mm Hg. Physical examination findings were notable for a 6 × 7-cm area of swelling and induration in the left groin without warmth, erythema, fluctuance, or drainage. She reported pain with palpation of her left groin and right abdomen. There were no rashes or erythroderma. 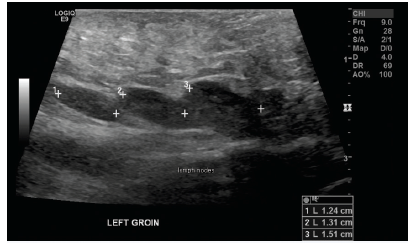 Ultrasonography of the left groin showed several hypoechoic solid lesions suspicious for confluent lymphadenopathy. She received ibuprofen, diphenhydramine, and 2 boluses of normal saline, and she was started on intravenous clindamycin.

The day after admission, the patient developed persistent hypotension that was unresponsive to multiple fluid boluses. Vancomycin and ceftriaxone were added to broaden the antibiotic coverage. She later developed acute-onset respiratory distress and was transferred to the local children’s hospital. Additional laboratory workup following transfer included tests for HIV, gonorrhea, and chlamydia, the results of which were negative.

The differential diagnosis included bacterial lymphadenitis, sexually transmitted infections such as lymphogranuloma venereum, and malignancy. Given the presence of hypotension and fever, an infectious etiology seemed most likely, with a concern for septic shock.

After transfer, the patient had persistent fever and groin pain, with repeated inguinal ultrasonograms showing a small area of subcutaneous fluid and air but no discrete abscess. The left groin eventually began to drain spontaneously, and a wound culture specimen grew Staphylococcus aureus, resistant only to penicillin. Blood culture results remained negative for bacteria. She was given a diagnosis of deep inguinal cellulitis with associated toxic shock syndrome (TSS).

TSS is an acute illness caused by bacterial exotoxins produced by either S aureus or Streptococcus pyogenes. These toxins serve as “superantigens” and are able to activate a large number of T cells while bypassing the standard process for antigen presentation. The result is a massive release of inflammatory mediators, including cytokines, interleukin, tumor necrosis factor, and interferon.1 TSS was first described in 1978 among several pediatric patients.2 A significant increase in cases was reported in 1980 associated with highly absorbent tampons.3 Cases are now relatively evenly divided between menstrual and nonmenstrual causes. Nonmenstrual cases frequently are associated with surgical and postpartum wound infections. An association with nonsurgical cutaneous lesions also exists, especially among children.4

TSS typically presents with a rapid onset of fever and hypotension accompanied by headache, sore throat, malaise, myalgia, vomiting, diarrhea, rash, and dizziness. Laboratory test findings may include leukocytosis, anemia, thrombocytopenia, elevated blood urea nitrogen/creatinine, elevated values on liver function tests, and elevated creatinine phosphokinase. In contrast to streptococcal TSS, the isolation of S aureus is not a requirement for the diagnosis of staphylococcal TSS. In fact, S aureus is recovered from blood cultures in only approximately 5% of cases.1

The treatment of TSS largely is supportive, including aggressive fluid resuscitation. Empiric antibiotic therapy consists of clindamycin and vancomycin for 7 to 14 days. In vitro studies have shown clindamycin to be superior to β-lactam antibiotics due to its inhibition of protein (hence toxin) synthesis.5 Intravenous immunoglobulin therapy has been demonstrated to improve outcomes when used as an adjunct to antibiotic therapy in adults with streptococcal TSS but not in pediatric patients with streptococcal disease nor in patients with TSS due to S aureus.6,7

Our patient’s condition slowly improved. At the time of discharge, she was normotensive and had been afebrile for more than 24 hours. She was discharged home on cephalexin and scheduled for infectious disease follow-up.