The Danger of Hemoptysis

Few signs cause more apprehension than the coughing or expectoration of bright red blood originating from the lungs, known as hemotpysis. Blood from epistaxis or hematemesis aspirated into the lungs are causes of pseudohemoptysis, where the expectorated blood does not originate from the lungs. Hemoptysis must be confirmed by direct evidence in every case. Even streaky hemoptysis in a smoker or former smoker should raise concern for lung cancer in addition to acute or chronic bronchitis.

There are 2 major groups of patients with hemoptysis: individuals with new onset hemoptysis in whom the underlying cause or disease is not evident yet, and those with known causes (eg, chronic bronchitis, chronic bronchiectasis, tuberculosis, and lung cancer). Pulmonary alveolar hemorrhage from drug-induced lung injury, Goodpasture syndrome, Wegener’s granulomatosis, or immune complex-mediated lung injury (eg, systemic lupus erythematosus) can produce hemoptysis.

Cryptogenic hemoptysis can be defined in cases where the cause remains unknown despite clinical investigation (including fiberoptic bronchoscopy). Between 7% and 25% of hemoptysis cases are cryptogenic after complete evaluation, which includes a chest CT scan and bronchoscopy, but the majority are not and require urgent attention from an experienced clinician to minimize morbidity and mortality from asphyxiation.1 Even hemoptysis in a patient with known disease may signal deterioration from the existing condition and/or emergence of a new complication.

Finally, hemoptysis can be further classified as either submassive or massive based on the volume of blood expectorated over a time period, a distinction that will impact immediate decisions in triage and management.1-3 Currently, no consensus criteria exists to separate massive from submassive hemoptysis. Multiple studies have quoted volumes that range from 100 mL/d to 1000 mL/d.2 Since the anatomical dead space of the major airways is 100 mL/d to 200 mL/d, the amount of hemoptysis leading to airway obstruction (>200 mL/d) is considered to be massive hemoptysis.3

The Source of Hemoptysis

Recognizing hemoptysis is immediate and obvious. However, a common pitfall is for patients and clinicians to delay diagnosis, treatment, and management by minimizing or denying the dangers of hemoptysis. Not all cases of hemoptysis in smokers are due to acute or chronic bronchitis. Ascertaining the likely source of hemoptysis, assessing effectiveness of the patient’s cough to prevent choking, and quantifying the volume and rate of hemoptysis are all necessary to avert poor outcomes and even death. The vast majority (>90%) of potentially life-threatening hemoptysis originates from the bronchial arteries which supply the tracheobronchial tree and lung parenchyma; between 5% and 10% come from the pulmonary arteries which supply the capillaries that envelope the pulmonary alveoli to participate in gaseous exchange.4

Hemoptysis from bronchial artery aneurysms or malformations can be very severe—eg, large volume and brisk bleeding since the bronchial circulation originate from the thoracic aorta; lower pressures within the pulmonary arterial system tend to produce smaller volumes of hemoptysis but these are very broad generalization with pitfalls.2,3 Both circulations are compromised in pulmonary infarction, leading to pulmonary hemorrhage (eg, pulmonary vasculitis and pulmonary embolism). Bleeding from either circulation can threaten asphyxiation from hemoptysis and the lethal volume can be relatively small in very sick and debilitated patients who cough ineffectively.

Patient symptoms and signs from physical examination should be used to begin appraisal of the potential danger from hemoptysis, and help choose the proper course of management. Pitfalls are plentiful when hemoptysis is not recognized early or reported by the patient, or the volume not measured and the rate of bleeding not ascertained by the clinician. Hemoptysis should be considered serious if not potentially lethal with an associated mortality ranging from zero to as high as 80%1-3 from asphyxiation. Hemoptysis greater 1000 ml/d in the presence of cancer is associated with a mortality rate of 80%.3

Since hemoptysis is often mixed in with mucus, the ability to quantify the exact amount of blood is problematic. Patients find it difficult to provide an estimate in milliliters unless using a container that is divided by the same increment. Instead, try using common measurable terms such as teaspoon (tsp), tablespoon (tbsp), or cup. Note: 1 tsp = 5 ml, 1 tbsp = 15 ml, and 1 cup = 237 ml. By establishing these parameters, any amount ≥1 cup per day can be considered massive hemoptysis (48 tsp = 1 cup, 16 tbsp = 1 cup).

After assessing the vital signs (for low SpO2) and the patient’s general appearance for respiratory distress, ask the patient for symptoms that generally accompany hemoptysis—such as choking, chest pain, and dyspnea. Also, ask the patient if the hemoptysis began suddenly or recently increased in severity to ascertain if hemoptysis has been present for days, weeks, or months.

Hemoptysis with chest pain may be due to acute or chronic pneumonia (pleurisy), pulmonary embolism (pleurisy), pulmonary edema (angina pectoris), and lung cancer (metastatic spread). Hemoptysis with dyspnea may suggest the onset of respiratory failure or reflect the patient’s underlying condition. These patients should be referred from clinic immediately to the emergency department for possible airway management, such as endotracheal intubation and hospital admission.

A focused, detailed review of current medications and social habits is essential in identifying risk factors for hemoptysis. Patients who are thrombocytopenic, have history of inherited coagulopathies, acquired bleeding diathesis, or currently on anticoagulants are at higher risk for hemoptysis. Recreational drugs, such as cocaine, and chemotherapy agents can cause pulmonary alveolar hemorrhage. Smokers or former smokers older than 40 years of age with hemoptysis should be evaluated for lung cancer since bronchogenic carcinoma is responsible for 5% to 44% of cases.4

The vital signs and physical examination can be very helpful is narrowing the differential diagnosis of hemoptysis. Look for evidence of hypoxemia (SpO2 <90%) and severe respiratory distress manifested as tachypnea (respiratory rate >20 breaths per minute), use of accessory muscles of respiration, including the prominence of sternocleidomastoid muscles as they contract, and intercostal muscle retractions. Cachexia should raise suspicion for cancer. Lip or oropharyngeal telangiectasias can point to hereditary telangiectasia or Osler-Weber-Rendu syndrome. Crackles in the lung may be heard in pulmonary edema from heart failure, or pulmonary alveolar hemorrhage from Goodpasture syndrome or granulomatosis with polyangitis and other vasculitides of the lung.5

Absence of breath sounds on auscultation and dullness to percussion point to a pleural effusion. Unilateral wheeze is classically associated with large airway obstruction from a foreign body or lung tumor, including malignancies and bronchial adenomas. Bronchial breath sounds correlate with lung consolidation. Petechiae, purpura, and nose bleeding should alert the clinician to a bleeding diathesis. Clubbing can be linked to chronic bronchiectasis or cystic fibrosis.

Remember the time-honored mnemonic BATTLE CAMP (Table) as a checklist of the possible diagnoses after first confirming the patient has hemoptysis and not pseudohemoptysis or hematemesis. The search for the correct diagnosis should never delay the assessment of whether the patient has streaky, submassive, or massive hemoptysis.

Pulmonary endometriosis is a rare cause of monthly hemoptysis or catamenial pneumothorax in young women during menses, representing parenchymal and pleural disease, respectively.6 Dieulafoy disease of the bronchus should be added to the list of ailments in the mnemonic. Dieulafoy disease has been recently reported as a cause of cryptogenic hemoptysis as well as massive hemoptysis. This is an arterial vascular abnormality of the bronchus similar to the condition first described in the stomach and responsible for an estimated 2% of upper gastrointestinal hemorrhage.1 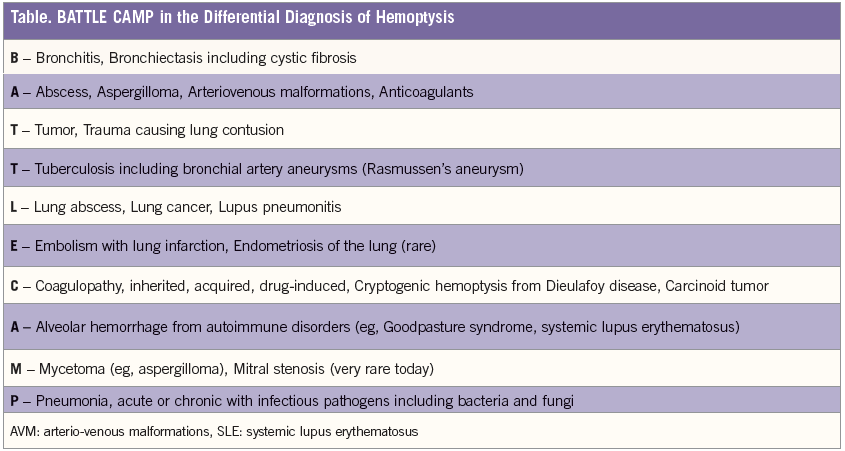 Relatively few blood tests are needed in the initial evaluation of a patient with hemoptysis. A chest x-ray and complete blood with platelet count, international normalized ratio, and partial thromboplastin time are essential first tests. The coagulation studies may provide clues to a bleeding diathesis. Sputum smear and culture and specific serology for infectious causes can be ordered after reviewing the chest x-ray. Any parenchymal density suggesting a mass or mediastinal abnormality warrants a chest CT scan with intravenous contrast. A chest CT scan is also indicated when the chest x-ray is normal but hemoptysis is recurrent and/or the clinical suspicion for lung cancer is high. The findings on chest CT scan may map out the next course of action, such as diagnostic bronchoscopy with biospies.

If no cause is found after thorough evaluation and laboratory testing, including chest CT scan and bronchoscopy, patients are diagnosed with cryptogenic hemoptysis.1 The long-term prognosis is good; the majority of patients are free of further hemoptysis within 6 months of evaluation.7 However, smokers older than 40 years with cryptogenic hemoptysis may present later with lung cancer and these cases deserve closer follow up.8 If hemoptysis persists for several months or remains unexplained in a smoker at risk, referral to a pulmonologist for a second opinion and fiberoptic bronchoscopy is recommended. ■

Laren Tan, MD, is a fellow in the Division of Pulmonary, Critical Care and Sleep Medicine, Department of Internal Medicine at University of California Davis School of Medicine.

Samuel Louie, MD, is a professor of medicine in the Division of Pulmonary, Critical Care and Sleep Medicine, Department of Internal Medicine at the University of California Davis School of Medicine.