A 90-year-old woman presented to the emergency department (ED) with acute-onset altered mental status and left-sided weakness. The woman had a baseline Karnofsky Performance Scale score of 60% (ie, requires occasional assistance but is able to care for most personal needs), and she had a history of diabetes mellitus, hypertension, and nonvalvular atrial fibrillation for which she was taking twice-daily dabigatran, 110 mg.

Physical examination. On initial evaluation, the patient was found to be responding minimally to verbal commands; the patient’s daughter offered most of the history. The patient’s blood pressure was elevated at 188/136 mm Hg, and she was tachycardic, with a heart rate of 110 beats/min. Her respiratory rate and temperature were normal.

Cardiac examination revealed an irregularly irregular rhythm, with no carotid bruits. On neurologic examination, the patient was alert and could obey simple commands but was disoriented to time, place, and person. Her Glasgow Coma Scale score was 13 of 15 (ie, mild neurologic injury), with no evidence of cranial neuropathies. Motor system examination revealed mild left-sided hemiparesis (graded at 4/5) with a positive Babinski sign on the left side.

Diagnostic tests. Results of initial laboratory tests revealed a hemoglobin level of 14.3 g/dL, a platelet count of 170 × 103/µL, a blood urea nitrogen level of 12 mg/dL, and a creatinine level of 0.74 mg/dL.

A computed tomography (CT) scan of the brain showed a right frontal hematoma measuring 3.4 × 2.0 cm (Figure 1) with mild edema and no midline shift. The patient had an intracerebral hemorrhage (ICH) score of 1, corresponding to a 30-day mortality estimate of 13%. 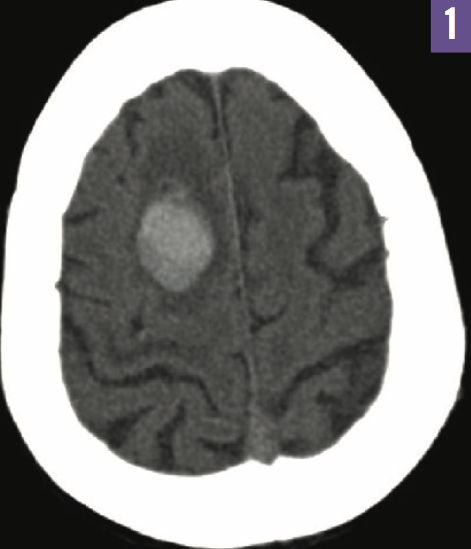 While in the ED, the patient’s blood pressure was controlled with nicardipine intravenous infusion, and she was started on idarucizumab, 5 g, in 2 divided doses. Dabigatran was discontinued. She was admitted to the intensive care unit for neurologic monitoring.

Outcome of the case. The patient had an uneventful hospital course, with improvement of her altered mental status and her left-sided weakness. Serial CT scans at 12 and 96 hours after the initial CT showed a stable hematoma size. She was discharged to a rehabilitation facility without an oral anticoagulation regimen.

A follow-up CT scan 4 months after her initial presentation (Figure 2) showed resolution of the hematoma. 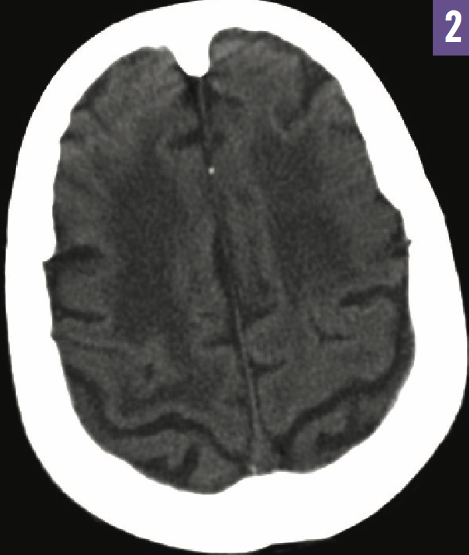 Discussion. Idarucizumab is a humanized monoclonal antibody that in 2015 received Food and Drug Administration (FDA) approval for the reversal of the anticoagulant effects of dabigatran in cases of life-threatening bleeding or when emergency surgery is required.1,2

Despite the fact that direct oral anticoagulants (DOACs) are associated with a significantly lower risk of ICH compared with vitamin K antagonists, ICH nevertheless can occur with DOACs, with elderly persons at particularly higher risk.3 Dabigatran is the only DOAC that has an FDA-approved reversal agent, which can be lifesaving in patients with serious bleeding, as in our patient’s case.