During a routine physical examination, a 2-week-old infant was noted to have mottled skin on his limbs and trunk. According to his mother, the mottling became more intense after exposure to cold temperatures, and it disappeared on warming.

The infant was born at full term via normal vaginal delivery to a 25-year-old, gravida 2, para 1 mother following an uncomplicated pregnancy. The mother had consumed no tobacco, alcohol, or medications during the pregnancy. Apgar score was 7 at 1 minute and 9 at 5 minutes. Birth weight was 3.1 kg, and birth length was 51 cm. The neonatal course had been uneventful. Apart from the mottling of the skin, physical examination findings were otherwise normal.

A diagnosis of cutis marmorata was made. The parents were reassured of the benign nature of the condition and that the condition likely will resolve with time.

Cutis marmorata is characterized by a symmetrical, lacy, reticular, red-purple mottling of the skin after exposure to cold temperatures.1 It usually is observed on the extremities and trunk. The evanescent, lacy network of small blood vessels is due to an exaggerated vasomotor response to cold temperatures that produces vasospasm, with subsequent hypoxia and vasodilatation of venules and capillaries. The mottling disappears when the skin is warmed.

Cutis marmorata must be distinguished from livedo reticularis. Livedo reticularis is characterized by the presence of a bluish purple, mottled or netlike pattern in unbroken circles on the skin.2 Exposure to cold environments usually intensifies the vascular pattern. In contrast to cutis marmorata, the mottling does not resolve when the skin is warmed, and the discoloration is bluish purple rather than red. The lesion is more intense and is persistent.1 Presumably, the condition results from slow or stagnant blood flow, vessel-wall pathology, and decreased oxygen tension.3,4 Livedo reticularis occurs sporadically in most cases. The condition may be congenital or acquired.

Congenital livedo reticularis, also known as cutis marmorata telangiectatica congenita (CMTC), is noted at birth.4 CMTC typically affects one extremity, although the trunk and face also may be involved.5 Prominent blood vessels and telangiectasia often are seen.5 Body asymmetry is the most common anomaly associated with CMTC.6 Other associated anomalies include vascular malformation, cutaneous atrophy, and macrocephaly.5 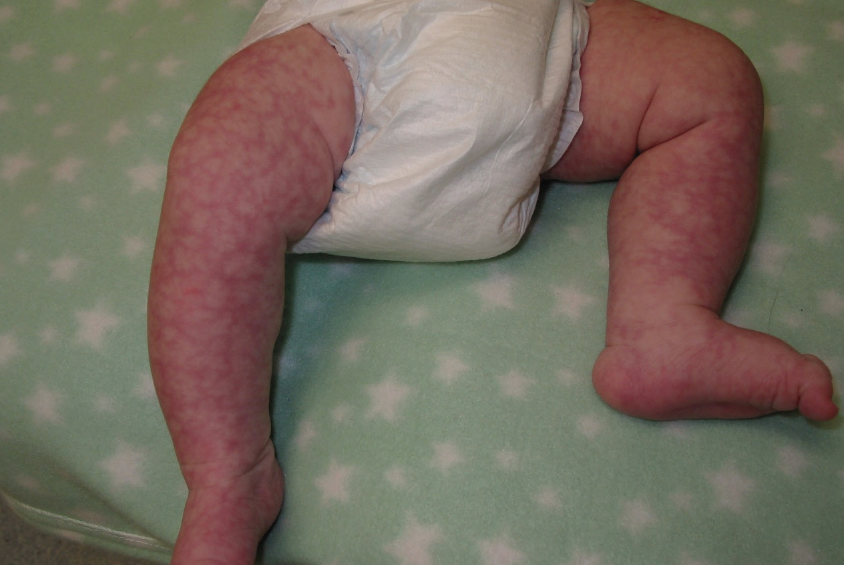 Treatment of cutis marmorata should be directed at any known underlying cause, if possible. In healthy children, treatment usually is not necessary, because the tendency to mottle usually resolves by 6 to 12 months of age.