Could something other than drug sensitivity explain this rash?

Dr Rief-Elks is a faculty physician and Dr Mohebbi is a family medicine resident at the Siouxland Medical Education Foundation, University of Iowa in Sioux City.

KIRK BARBER, MD, FRCPC––Series Editor: Dr Barber is a consultant dermatologist at Alberta Children’s Hospital and clinical associate professor of medicine and community health sciences at the University of Calgary in Alberta. 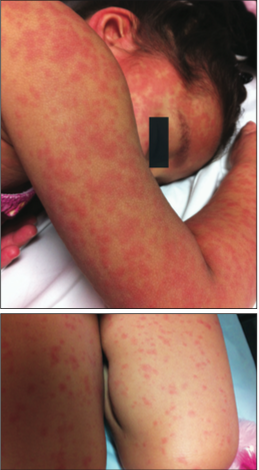 Case: A 4 1/2-year-old girl is brought for evaluation of a generalized, pruritic, erythematous rash. The rash first appeared on the face and upper trunk and then spread to the upper and lower extremities over the next 12 hours.

The child was afebrile and had no respiratory symptoms. Five days earlier, she had started taking cephalexin for a sore throat. She had a history of an allergic reaction to amoxicillin, which consisted of an erythematous rash and pruritus that resolved after the antibiotic was discontinued.

Could something other than drug sensitivity explain this rash?

Yes, always consider infectious mononucleosis in a child with an antibiotic-induced rash.

In this child, physical examination findings were otherwise normal; there was no cervical lymphadenopathy or splenomegaly. The white blood cell count was 8900 cells/µL, with 69% lymphocytes. Results of a serum monospot test were positive.

Ampicillin-induced rash occurring in cases of infectious mononucleosis is well documented. Similar phenomena can reportedly happen with other antibiotics, such as cephalexin, azithromycin, and levofloxacin. The maculopapular rash usually appears 4 or more days after administration of ampicillin and occurs more commonly in females than in males.

Most patients with antibiotic-related rash during infectious mononucleosis do not have true drug sensitivity, and they usually tolerate antibiotics without problems in
the future. The pathogenesis of the rash is unknown, but it is postulated to be caused by an alteration in the host’s immune status during the viral infection.

The rash in this child appeared 5 days after the initiation of cephalexin, which would suggest that it was antibiotic-induced in the presence of infectious mononucleosis and not an allergic reaction to the antibiotic. A limitation to this case is that the overall sensitivity and specificity of the serum monospot test, which is 86% and 99%, respectively, changes to 69% and 88%, respectively, 1 week after symptom onset.

The rash usually does not worsen if the antibiotic is continued. However, in this patient, because she had already received 5 days of antibiotic therapy, was afebrile for more than 3 days, and had evidence of infectious mononucleosis, cephalexin was discontinued. The rash resolved in 2 days. Examination findings were normal at follow-up 10 days later.