A 2-month-old boy had been doing well after birth until about 7 or 8 weeks of life. His parents felt that he was not smiling, and was only looking to the right. At 10 weeks of age, they felt that he was not responding to light. Upon further questioning, the family reported that the boy had never demonstrated a social smile or tracking, and that at 6 to 7 weeks of life, he would preferentially look to the right. He had experienced no problems with breastfeeding.

The boy had been born at 38 weeks of gestation via spontaneous vaginal delivery without complications. The mother had received adequate prenatal care, and her prenatal laboratory test results were normal. She had had a fever of 39.4°C at week 4 to 5 of gestation and a stomach virus with a fever of 38.9°C at 32 weeks of pregnancy. The mother’s family history was remarkable for maternal uncle who had been born with “visual and brain impairment,” other family members with boils from methicillin-resistant Staphylococcus aureus infection, and a paternal grandmother with hypothyroidism.

An ophthalmologist was consulted based on concern for a possible TORCH infection (toxoplasmosis, other [eg, syphilis, varicella zoster virus, parvovirus B19], rubella, cytomegalovirus, and herpes).

Further history revealed that the family had 2 cats, and that while the patient’s mother had not changed the litter since her first pregnancy, she had helped her husband clean the litter box but says she did not touch it. She also had traveled from her home near Houston, Texas, to New Orleans, Louisiana, and to Austin and Dallas, Texas. She had stayed with friends who have cats. She denied having other pets; swimming in lakes, rivers, or ponds; and eating uncooked, unpasteurized, or undercooked food. She denied sick contacts and tick or mosquito bites.

Results of electroencephalography showed slowing of the right hemisphere compared with the left, with bilateral epileptiform activities; hence, levetiracetam was started. Magnetic resonance imaging of the infant’s brain showed mild lateral ventriculomegaly and a few areas of periependymal enhancement (A), along with encephalomalacia and calcifications (B). 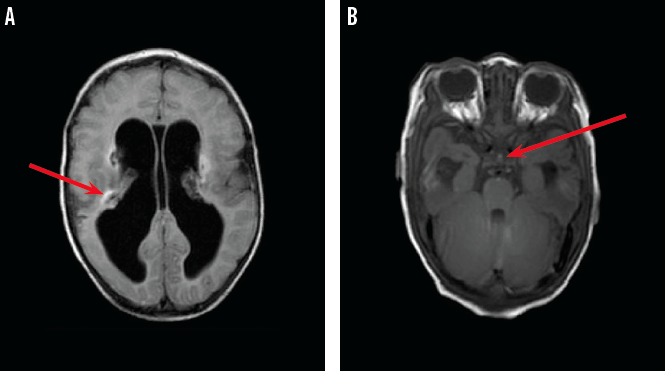 Figure A. Brain MRI of a 2-month-old boy showed mild lateral ventriculomegaly and a few areas of periependymal enhancement (arrow).

The infant was treated with sulfadiazine, leucovorin, and pyrimethamine.

Cats are the primary hosts for T gondii, and humans accidentally become infected with the protozoan by handling cat feces.1 The prevalence of congenital infection ranges from 0.1 to 0.3 cases per 1,000 live births, and vertical transmission is higher with delayed seroconversion in a mother.2

Ocular manifestations are the most common findings and the usual presenting symptom of toxoplasmosis. Infants with congenital infection are asymptomatic at birth in 70% to 90% of cases. Signs of congenital toxoplasmosis at birth can include a maculopapular rash, generalized lymphadenopathy, hepatomegaly, splenomegaly, jaundice, pneumonitis, diarrhea, hypothermia, petechiae, and thrombocytopenia. As a consequence of intrauterine infection, meningoencephalitis, CSF abnormalities,3 hydrocephalus, microcephaly, chorioretinitis, seizures, and deafness can develop. The classical triad of cerebral calcifications, chorioretinitis, and hydrocephalus is rare but highly suggestive of congenital toxoplasmosis.