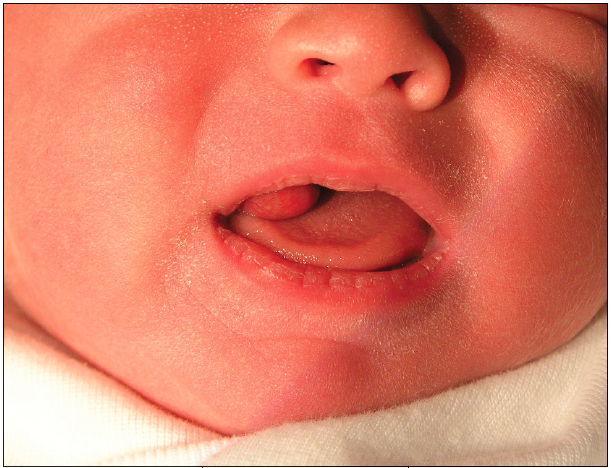 A full-term, vaginally-delivered 3164-g female newborn was noted to have a fleshy mass intermittently protruding from her mouth. The mother reported that the infant latched onto the breast well without trouble breathing or cyanosis. After feedings, the mass would appear purple. The pregnancy was complicated by hyperemesis; the delivery was normal.

The smooth, spherical, pedunculated mass appeared to be attached to the inside surface of the upper alveolar cartilage to the right of midline. Physical examination findings were otherwise normal. Diagnosis by pathology report proved to be congenital epulis.

Differential diagnosis included the following items. A mucocele, a translucent, bluish pseudocyst, results from leakage of salivary mucin and is usually found inside the lower lip or on the floor of the mouth (ranula).1 An Epstein pearl is a small, white, benign inclusion cyst located at the midpoint of the junction between the hard and soft palate. A Bohn nodule is a white or translucent round papule that appears at the alveolar ridges between the second and fourth month of life; it can be isolated or multiple.1 The mandibular central incisor is the most common natal tooth found at birth or by 1 month of age. A choristoma and an epidermoid, dermoid, or lympoepithelial cyst can also be found in the oral cavity.1 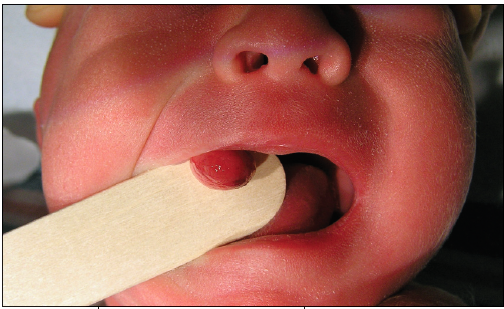 Congenital epulis, also known as congenital gingival granular tumor or Neumann tumor,2,3 appears pink, firm, smooth or lobulated, pedunculated, and nonulcerated.4,5 This benign mass occurs exclusively in newborns. It arises from the gingival mucosa and is 2 to 4 times more common in the maxilla than in the mandible2; it is present in both simultaneously in 10% of cases.4 The lesion is 7 to 10 times more common in girls than in boys.2,5 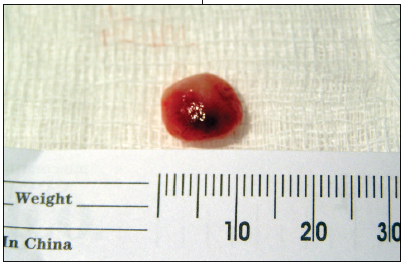 Although the mass stops growing at birth, and a small lesion may spontaneously resolve,6 it can be as large as 9 cm.7 The lesion can interfere with eating or breathing and therefore is typically excised, either under local or general anesthesia. A large tumor can be resected using a carbon dioxide laser.2 No recurrence, metastasis, or damage to future dentition has been reported.8

The 1.2 × 0.9 × 0.6-cm lesion in this newborn was clamped at the stalk with a hemostat and easily excised with sterile scissors. The cut surface was cauterized with silver nitrate, with less than 1 mL of blood loss. The lesional cells contained granules positive for periodic acid- Schiff, were diatase resistant, and S-100 protein negative; all of which is consistent with congenital epulis. The newborn was able to continue breastfeeding and was discharged at 2 days of age. No complication has been noted at follow-up visits.■